Vladimir Putin gave the go-ahead for his brutal invasion of Ukraine back on February 24 after Russian troops had spent weeks massing along the border with its eastern neighbour. Tens of thousands of people – civilians and troops from both sides – have been killed in the vicious fighting. Russia’s brutal war has left a path of destruction throughout Ukraine, with heavy shelling and missile strikes triggering huge explosions and reducing several large buildings throughout the country to rubble.

Ukraine has been praised by many throughout the Western world for the courageous spirit is showing during the horrific war, with President Volodymyr Zelensky receiving many of the plaudits.

Now incredible pictures are emerging of the restoration of major buildings in Ukraine that have been smashed by Russia in towns and villages they have occupied.

On Twitter, the “Defense of Ukraine” (@DefenceU) account posted two pictures of a building in the town of Makariv, which is an urban-type settlement in Bucha Raion, Kyiv Oblast.

The first shows the destroyed and burnt out structure following Russian occupation of the town, with a second picture showing it completely renovated and restored. 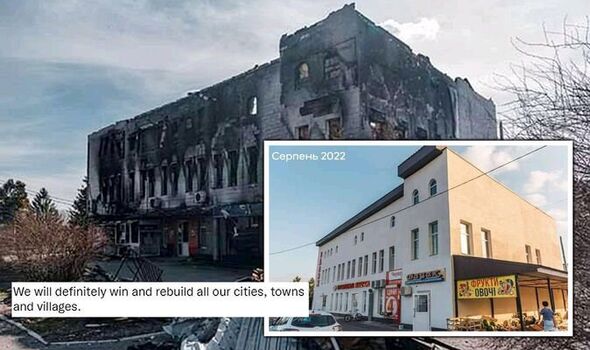 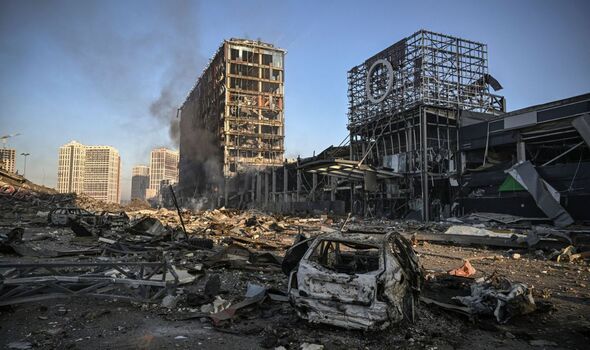 The Ukraine Government department defiantly wrote alongside this on Twitter that “we will definitely win and rebuild all our cities, towns and villages”.

The caption accompanying the two pictures read: “This is how the building looked as a result of the Russian occupation of the town of Makariv; and this is how it looks now – freshly restored.

“We will definitely win and rebuild all our cities, towns and villages.”

Meanwhile, the Ukraine Defence account also tweeted a graphic stated that more than 45,000 Russian personnel have been killed so far during the war.

Using reports of the General Staff of the Armed Forces of Ukraine, it stated there had been 45,400 “eliminated personnel” since the war began on February 24.

Ukraine’s fierce determination to defend its country has been highly praised by many throughout the world, with Western superpowers rallying behind a country under heavy Russian bombardment. 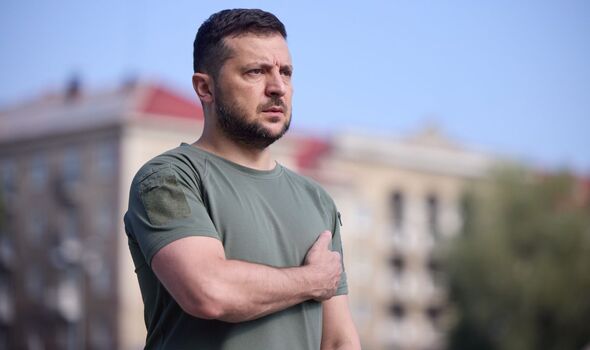 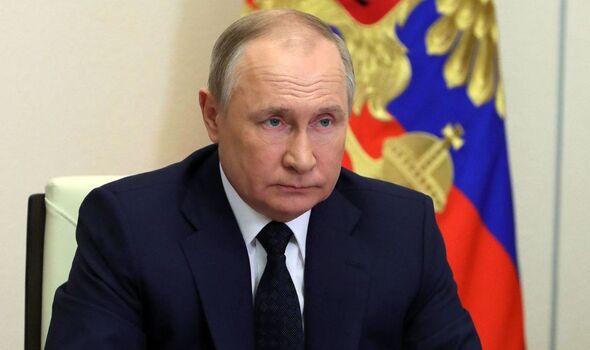 Within hours of the invasion nearly six months ago, Russia landed commandos at Antonov airfield, a cargo base just north of Kyiv, to secure an air bridge for a lightning assault on the Ukrainian capital.

But within a day, Ukraine had incredibly wiped out the elite Russian paratroopers and destroyed the landing strip.

Russia’s armoured columns eventually reached the northern outskirts of Kyiv, the disastrous failure not to secure a working air field on day one helped wreck Moscow’s plan to quickly take control of Kyiv.

Russian bombs continued to fall on Kyiv and as its residents huddled in metro stations for shelter or crammed train stations to flee, President Zelensky made clear he would not be moved.

The Ukrainian leader has used nightly video addresses to rally his country, insisting his country will keep fighting and doing everything possible to repel Russian advances.

Since then, President Zelensky has been beamed into the streets of Prague, the Grammy Awards in the US and the Glastonbury music festival in the UK, where he told cheering fans to “prove that freedom always wins”.