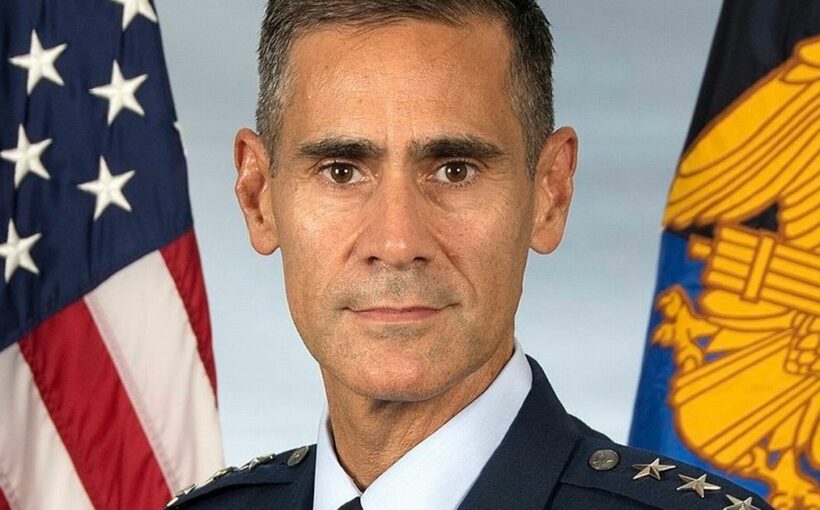 The September 11 attacks caught the American public, and most of the American military, completely by surprise.

When American Airlines Flight 11 struck the North Tower of the World Trade Centre complex in Lower Manhattan at 8:46am, most people believed it was an horrific accident.

It was only 17 minutes later when United Airlines Flight 175 slammed into the South Tower that the full enormity of the attacks became clear.

It was then, with the Pentagon in a state of complete panic, that Lieutenant Colonel Marc Sasseville and his wingman, Lieutenant Heather Penney Garcia, flew their F-16 Fighting Falcon jet fighters on a suicide mission.

The mission was to find United Airlines Flight 93 and destroy it. By this time, anguished calls from passengers and crew had alerted the world to the fact that the airliner had been seized.

Later reports revealed the United 93 hijackers’ target was the US Capitol building, seat of America’s government.

There had been no time to arm the F-16s with anti-aircraft missiles, and their 20mm M61A1 Vulcan cannons were still loaded with 511 rounds of dummy ammunition from a recent training mission.

If Sasseville managed to locate United 93, the only way to bring it down would be to deliberately crash into it.

For more astounding stories from the Daily Star, make sure you sign up to one of our newsletters here.

Sasseville told Lieutenant Penney Garcia that it could cost both of their lives to bring down Flight 93. Garcia was to crash into the jet’s tail while he flew head-on into the Boeing 757’s cockpit.

"We don't train to bring down airliners,” he later explained. “If you just hit the engine, it could still glide and [the terrorists] could guide it to a target."

There had been a significant delay in preparing the aircraft for flight. Major Daniel Caine, supervisor of flying with the 113th Wing of the Washington DC Air National Guard, had called Kenneth Beauchamp, his contact at the US Secret Service, and offered the 113th’s help as soon as the news of the attacks broke.

Beauchamp said it wouldn’t be needed, and it was only some time later that another agent called the base 10 miles southeast of Washington and the pilots were scrambled. The order had been signed off by Vice President Dick Cheney from the underground Presidential Emergency Operations Centre beneath the White House.

“When I heard the tone in his voice,” said Caine, “I called our bomb dump and told them to uncrate our missiles.”

Meanwhile, Sasseville was already telling his flight to suit up.

The four pilots at Andrews Air Force Base who were available to fly that day were Sasseville, Penney Garcia, Captain Brandon Rasmussen, and Major Daniel Caine.

“I have no idea what’s going on,” he told them, “but we’re flying. Here’s our frequency. We’ll split up the area as we have to. Just defend as required. We’ll talk about the rest in the air.”

Brigadier General David Wherley authorised Sasseville to bring down the airliner if he could.

He told him: "You have weapons free flight-lead control.

“Do you understand what I’m asking you to do?”

Believing that there was no time to waste, Sasseville and Penney Garcia will took off in their from Andrews Air Force Base at 10:42 am, their planes still effectively unarmed.

Penney Garcia, who was a comparatively inexperienced pilot, was in a state of panic as she climbed into her cockpit: “I’d never scrambled before,” she said. “I’d never done this. I was screaming to the maintainers to pull the chocks, and the guys were pulling the pins to arm the guns. Rasmussen said : “We were relieved to actually be given permission to go up and do something instead of feeling totally helpless. I mean we are fighter pilots, just like guard dogs chomping at the bit ready to go.”

Meanwhile, the control tower at Andrews was broadcasting a dire warning: “Attention all aircraft monitoring Andrews tower frequency. Andrews and Class Bravo airspace is closed. No general aviation aircraft are permitted to enter Class Bravo airspace. Any infractions will be shot down.”

By this time Sasseville and Penney Garcia were patrolling the skies over Washington, not knowing exactly where they would be needed: “I didn’t want to get too low for a good radar angle, and not too high, so we could get somewhere fast.”

Tactically, he admitted, he was “making things up on the fly,” because no pilot have ever encountered this kind threat before.

Their patrols took them over the still-smoking wreckage of American Airlines Flight 77 outside Pentagon building.

It wasn’t until hours later that Sasseville and his comrades would learn that United 93 had already gone down.

The passengers of the hijacked plane, possibly using a food trolley as a battering ram, and forced their way into the cockpit and overpowered the terrorists.

As they did so, the plane ploughed into the ground in a field outside Shanksville, Pennsylvania, killing all 44 people aboard including the 4 hijackers.

Vice President Dick Cheney, said when he heard the news: "I think an act of heroism just took place on that plane.”

The story of United 93 has rightly passed into legend, but the bravery of Sasseville and Penney Garcia, who had been prepared to give their lives on that day should also never be forgotten.