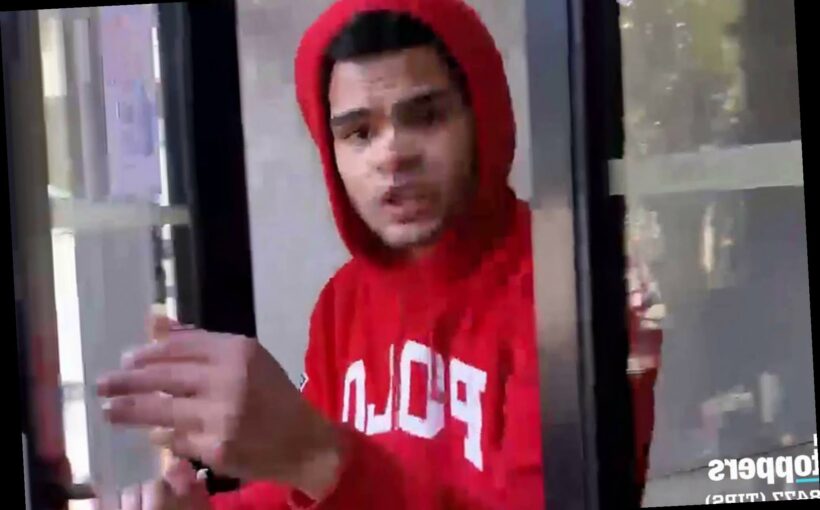 Cops released video of the man who they believe knocked a phone from the hand of a volunteer patrol group member as he recorded the suspect and a pal hurling anti-Asian slurs in Queens.

The victim, a member of the Main Street Patrol, spotted two men yelling anti-Asian slurs on Kissena Boulevard near Barclay Avenue in Flushing around 5 p.m. Sunday when he started following them, authorities said.

The victim held up his Samsung Note and recorded the pair from the entrance of a building they were entering, cops said.

Then one of the men, shown on the new video wearing a red hoodie with a Polo logo, allegedly went over to him, swatted the phone out of his hands and snapped, “Why are you recording me, c—k?” The phone was damaged, police said.

The man shown in the video is about 5 feet 10 and in his early 20s, last seen wearing a red hoodie, gray shorts and white sneakers.

His alleged accomplice is described as about 6 feet tall and in his 20s, wearing eyeglasses, a wool cap and black pants.

The Main Street Patrol is “a group founded by volunteers driven to keep the streets of Flushing safe after the rise of attacks on the Asian community especially the elders,” according to a post on its Instagram page.

“Our aim is to keep a watchful eye and educate our public on safe bystander tactics to protect each other,” the post says.