WA Premier Mark McGowan has warned “wildly angry” states from attempting to dismantle GST reforms after his government posted the country’s biggest ever budget surplus on the back of booming iron ore prices.

The mining state posted a $5.6 billion surplus for the 2020-21 financial year, which was $2.5 billion more than anticipated by Treasury officials in February thanks to $11.3 billion in royalties paid by its iron ore sector. 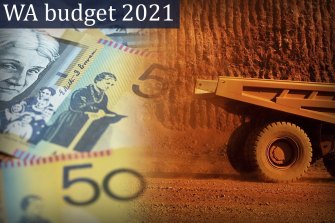 Mr McGowan said the surplus was a result of his government’s sound financial management but without the barnstorming iron ore price over 2020-21 the books wouldn’t have looked nearly as healthy.

The state also received $5.4 billion in GST grants from the Commonwealth, $2.1 billion of which came from 70 per cent floor top up payments that formed part of a restructure of the GST distribution system agreed to by the Commonwealth in 2018.

In a chest-beating presentation filled with stark comparisons to the deficit-laden budgets of his eastern states counterparts, Mr McGowan declared if WA were its own country, it would be the second most prosperous region after China.

However, the first-time Treasurer said WA’s success could trigger a fight over the GST system and blamed poor financial and COVID management in other states for their dire budget situations.

“If you compare us with other states, I kid you not, they will be wildly angry and will be wanting to undo the GST deal because they failed to budget properly,” he said.

“NSW failed to manage COVID and so they’ll want us to pay.

The New South Wales government has previously stated GST changes were resulting in ‘inequitable and unfair’ outcomes however Prime Minister Scott Morrison has ruled out any changes to the floor.

Mr McGowan said the surplus was a result of his government’s sound financial management, but without the barnstorming iron ore price over 2020-21 the books wouldn’t have looked nearly as healthy.

State revenue hit $40.1 billion, with more than 25 per cent of that coming from iron ore royalties, which came in at more than $11.3 billion.

In February the state predicted a surplus of $3.1 billion with a predicted iron ore price of US$134 per tonne.

That prediction proved US$20 below the actual figure as the iron ore price rallied over the last quarter thanks to continued disruptions of the industry in Brazil and global stimulus packages ramping up steel production in China.

For every dollar movement in the price of iron ore WA’s coffers become $82 million richer. 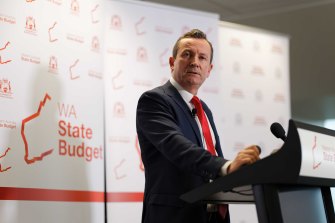 In addition to the iron ore surplus, WA’s taxation revenue increased by $1.1 billion more than forecast because of the state’s strong residential property and motor vehicle markets.

The good fortunes are also expected to keep on going into the forward estimates, although at a muted level because of more conservative forecasts of taxation and royalty revenue.

Despite being showered in money and some repayment of government loans, net debt will remain above $32 billion this year and edge slightly higher to $36 billion by 2024-25 as the government ramps up its $30 billion construction pipeline.

The budget was scant on predictions about COVID impacts but included $1 billion of already announced extra funding for COVID response initiatives in health and community safety.

Mr McGowan said the state followed the Commonwealth’s budget assumption that international borders would open up in the September quarter of next year. 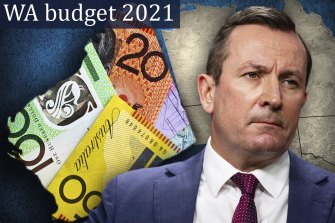 Mr McGowan is both Premier and Treasurer in WA.

He said there were no assumptions about the state border because it had very few impacts on the state’s finances.

“There is a border to NSW and Victoria but there is no assumption around it because the Treasury estimates that basically in terms of travel there is little impact of a border in terms of the financial impact on the state,” he said.

“The real impact is if we have an outbreak, that’s where the impact is.”

The Premier echoed previous remarks that the state would not consider loosening border and lockdown COVID restrictions until the state had hit between 80 and 90 per cent vaccination rates.

The state will bring forward its review of its contentious wages policy that has locked the public sector into wage rises of only $1000 since Labor came to government in 2017.

Mr McGowan said discussion would begin with public sector unions immediately with a view to making a decision next year, however he would not reveal what impact any increase would have on the future finances of the state.

“I think it’s recognising reality, we have a good financial position and we’ve had an extremely tough wages policy now for four years,” he said.

In addition to already announced funding boosts in health and housing the budget also contained $750 million for a climate action plan, $1.4 billion for a new desalination plant and $400 million to get the ball rolling on the Westport outer harbour port project.

WA’s booming economy has had its downfalls, however, with the state government forced to delay several major infrastructure projects including the Thornlie to Cockburn train line as skills shortages impacted industry.