“You look at the UK, Boris Johnson, he highlights one of the reasons why he should continue to be prime minister as being the way he handled the pandemic. What a joke. They should have done a hell of a lot better,” Willie Walsh, director general of the International Air Transport Association (IATA), told the Paris Air Forum. 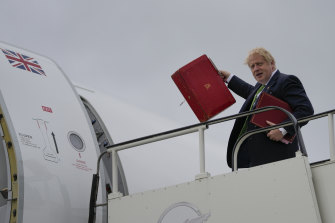 Downing Street did not immediately respond to a request for comment.

Under Johnson’s leadership, Britain had one of the best vaccination rates among G7 countries and invested billions in a job support program. However, it also endured one of the worst death tolls and economic impacts. 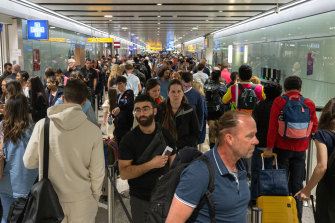 Travellers wait in a long queue to pass through the security check at Heathrow in London.Credit:Getty

Both men serve in Johnson’s Cabinet.

Walsh said airlines could not have recruited staff earlier this year when British traffic was down and industry feared new potential COVID-19 measures.

“You have the politicians saying airlines should have ramped up sooner. No, they shouldn’t,” Walsh said on Tuesday.

“Airlines would have gone out of business had they done what these idiot politicians are saying they should have done.”

A snapback in air travel led to long lines at some British airports, as well as in Amsterdam, Dublin and Toronto, as airport managers struggled to fill jobs.

Walsh, a former British Airways and IAG boss, has attributed congestion to delays in getting clearances for airport staff but said the situation is manageable and limited to some airports and airlines.

Walsh argued aviation should have been more forceful in challenging government-mandated COVID-19 border closures which he said did little to curb the virus.