Home » What Americans Missed Most About Going to Restaurants. (It Wasn’t the Food.) 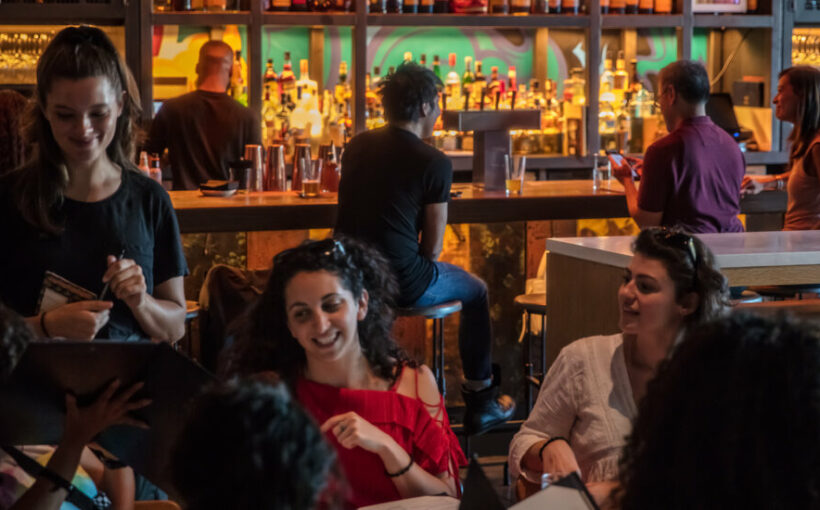 On Wednesday, dining rooms in New York City will be allowed to fill every seat for the first time since last March. This is big, in theory. In reality, we will probably keep seeing six-foot spaces between tables and plexiglass partitions for as long as the Centers for Disease Control and Prevention keeps recommending them.

But if you’re curious about what restaurants are and what makes them click, it’s been illuminating to watch them come back one piece at a time. In the past couple of weeks it’s been possible to see that a half-empty dining room, if it has people sitting at the bar, can feel more exciting than one that’s almost full.

So many modern restaurant interiors are designed around their bars that we take their contribution for granted. All those shakers clattering and bar stools swiveling and bartenders reaching for a bottle or a rag; the customers sitting down and getting up again: Bars are perpetual motion machines that help turn the larger, slower gears in the dining room. Turn off the lights at the bar and it’s hard to get any momentum going in the rest of the space. The restaurant feels hollow at the core.

Now, close the bar and the dining room — what we used to call “the restaurant.” Replace them with tables and chairs outside, as many cities did last summer. What you have still feels like a restaurant, even though it may not look like one. In some respects, dining outdoors gives us more of what we come to restaurants for. Do you enjoy checking out the clothes people have chosen to exhibit themselves in before leaving home? You’ll see a greater range of footwear, fabrics and fashions in 10 minutes outside Buvette than you will during a whole night in its back room.

Last week I had dinner inside Sona, the Indian restaurant that moved into the space on East 20th Street where Antoine Westermann used to run his “bistro of beautiful birds,” Le Coq Rico. After eating, I left and walked east for about 15 steps before I saw an editor I used to work with, sitting at a table in the street in front of Gramercy Tavern. He was wearing a dark plaid blazer over a canary-yellow polo shirt, a combination I’d never seen on him or anybody before. My first thought was: He looks terrific. My second thought: relief that he’d survived the pandemic and was eating out at what’s been one of his favorite restaurants for years.

Then I noticed the woman standing next to him, another person we’d both worked with. I hadn’t seen her since the pandemic began, either, and felt that particular feeling you have when you meet people again on the other side of some awful experience.

We made plans to eat together soon. Before I left, my friend in the blazer gestured down the street toward all the terraces built on the pavement and asphalt, and at the shrubs and flowers and tall, blazing patio heaters in front of Gramercy Tavern, and said, “This block is better than anything in Paris.” 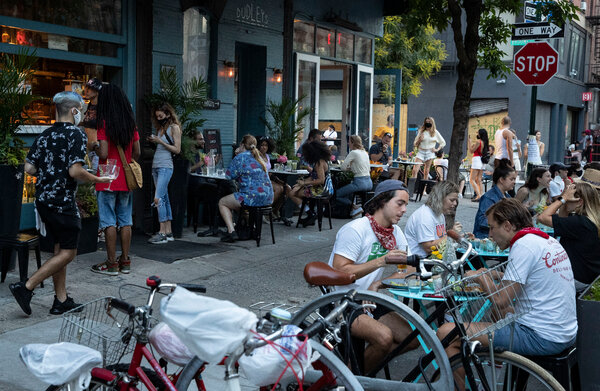 Chance meetings like this are one of the reasons we get up off the couch and leave the house. It lasted less than five minutes, but it meant more to me than all the online cocktail hangouts I’ve dutifully shown up for (and all the others I forgot about).

The pandemic was, among other things, a huge uncontrolled experiment in replacing unmediated human encounters with online meetings or transactions. The boom in online retail was predictable, but most of us were surprised by how smoothly office life continued without the office. Our country may be on the brink of a drastic shift toward working from home that will have repercussions for real estate, transportation, tax revenues and about a thousand other things.

Emily Weinstein has menu suggestions for the week. There are thousands of ideas for what to cook waiting for you on New York Times Cooking.