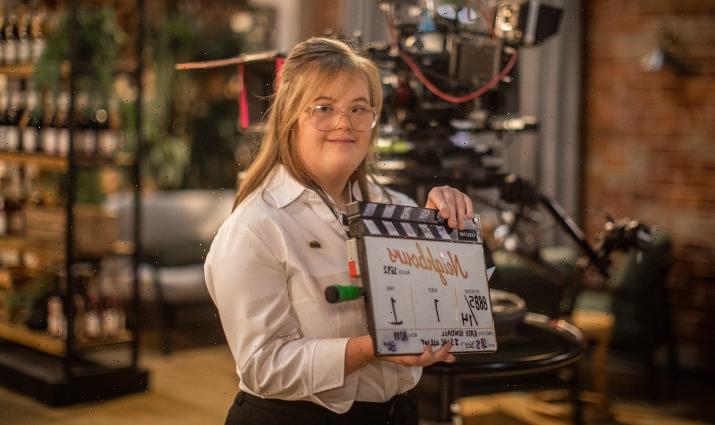 The proverb that fortune favours the bold rang true after Henrietta Graham dared to publicly announce one of her acting goals last December.

When Graham, 18, told The Sunday Age she would like a role on Neighbours one day, little did she know the declaration would help her realise the dream. 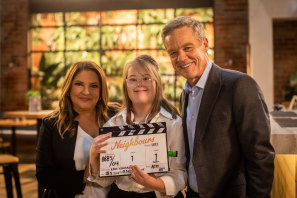 Henrietta Graham, centre, on the set of Neighbours, with actors Rebekah Elmaloglou and Stefan Dennis.Credit:Scott McNaughton

The article, about Graham’s enrolment in a new filmmaking course for people with disability, caught the eye of publicist Kelly Davis from Fremantle, the production company that makes the long-running series.

Davis thought it “a lovely story” and showed it to Neighbours producer Andrew Thompson.

They invited Graham on to the Neighbours set, which led to her auditioning then being hired last month as one of the last new characters on Neighbours, the much loved 37-year-old drama series whose very last episode will screen on August 1.

“She’s absolutely loving it,” says Henrietta’s mother, Natalie Graham. “We drive her to the set and the grin from ear to ear is just priceless. 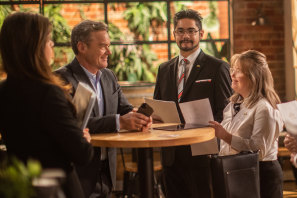 Graham plays Sam, an assistant to the manager of the fictional Lassiters Hotel.

It means she works with her Neighbours acting idol, April Rose Pengilly, who plays the manager, Chloe.

Thompson said Graham’s presence was an opportunity to promote inclusivity on screen. “And not just in a one-off scene — it’s a character that becomes part of our community,” he said. 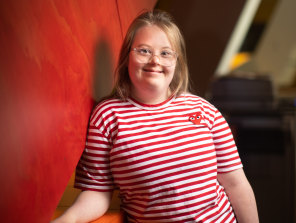 Henrietta Graham photographed for the Sunday Age last December for an article about a new film course for young people with disability.Credit:Simon Schluter

Last week Graham, who has Down syndrome, was shooting scenes at Fremantle’s studios in Melbourne’s east with Neighbours veterans Stefan Dennis and Rebekah Elmaloglou, who play Lassiters co-owners Paul Robinson and Terese Willis.

Elmaloglou said it’s been “such a delight” to work with Graham. “She’s so gorgeous, and so excited to be here, which is what it’s all about, really,” Elmaloglou said.

Graham said acting in the series — which helped launch the careers of actors including Kylie Minogue, Guy Pearce and Margot Robbie — made her happy and the other actors “are helping me all the time”.

She said Dennis was “amazing and funny” and Elmaloglou was “fun and cool”.

Graham said she was “so excited” to learn she got the role and loved working with “all my favourite characters”.

Thompson said he would love it if Graham’s role led to her getting other acting opportunities.

“If that’s what she enjoys doing, then that would be a wonderful thing,” he said. “If her career goes beyond Neighbours, then that’s what we all hope for.”

With less than a month of shooting remaining for Neighbours, Thompson said “emotions are starting to amp up” among cast and crew.

“But it’s certainly a celebration as well. I think everyone’s really proud of what we’ve achieved here and the stories we’ve told. We’re definitely going out on a high.”

He said “so many people get their first job” on Neighbours, so it was sad that future generations wouldn’t get that opportunity.

She said her family and friends were looking forward to her episodes screening from July 5 until the final Neighbours episode.

Natalie Graham said she was “extraordinarily proud” of her daughter’s achievements “in a world that doesn’t include people with disability all the time”, and said the role had given Henrietta great confidence.

A cultural guide to going out and loving your city. Sign up to our Culture Fix newsletter here.