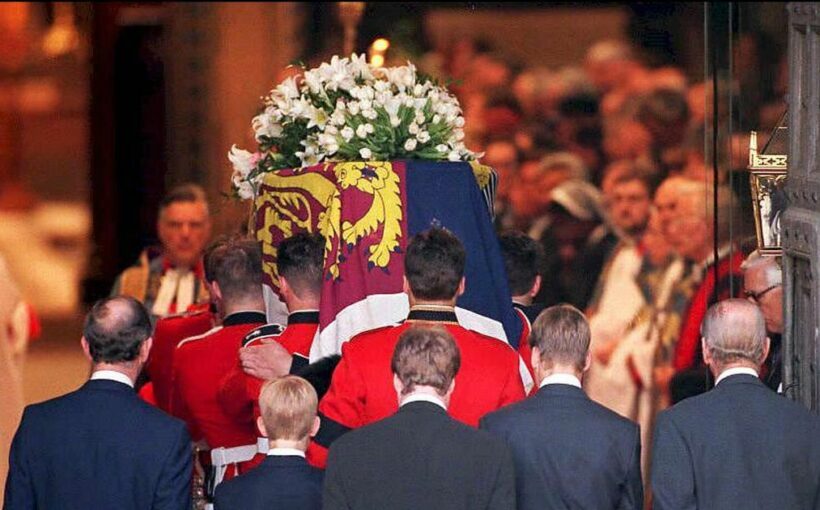 Billions across the world watched on as young Prince William and Prince Harry mourned the loss of their mother Princess Diana 24 years ago.

The loss of the People’s Princess threw the nation into mourning with millions lining the street as the Royal Family held a procession from Kensington Palace to Westminster Abbey.

Many remember the heartbreaking images of the brave young princes, aged only 15 and 12 at the time, walking composed behind their mother’s coffin.

Speaking on the Apple TV+ series The Me You Can't See, Prince Harry opened up about how he is still haunted by the funeral.

Harry said: "When my mum was taken away from me at the age of 12, just before my 13th birthday, I didn't want the [royal] life. Sharing the grief of my mother's death with the world."

He added: "For me, the thing I remember the most was the sound of the horses' hooves going along the pavement. Along the Mall, the red brick road. By this point I was, both of us were in shock. It was like I was outside of my body and just walking along doing what was expected of me.

"Showing one-10th of the emotion that everybody else was showing. I thought, 'This is my mum. You never even met her.'"

Speaking the 2017 BBC documentary, Diana 7 Days, Prince William said: "It was a very alien environment. I couldn't understand why everyone wanted to cry as loud as they did and show such emotion as they did when they didn't really know our mother.

"I did feel a bit protective at times about that. I was like, 'Well, you don't even know… you didn't even know her, why and how are you so upset?'

"But now looking back over the last few years I've learned to understand what it was that she gave the world and what she gave a lot of people."

It is alleged that both Prince William and Harry were instructed not to cry by their father Prince Charles, it was revealed in ITV’s Prince Harry’s Story: Four Royal Weddings.

Although, Harry has since spoken of how glad he is to have participated in the funeral, despite being so young.

Prince William also spoke about the decision as to why the two princes were involved so publicly in the funeral proceedings in Diana 7 Days and insisted, "it wasn't an easy decision" but was a "collective family decision".

He added: "I just kept thinking about what she would want and that she'd be proud of Harry and I being able to go through it."

Princess Diana tragically died following a car crash in the Pont de l'Alma tunnel in Paris on 31 August 1997, when her driver was fleeing the paparazzi.

The crash also resulted in the deaths of her companion Dodi Fayed and the driver Henri Paul.