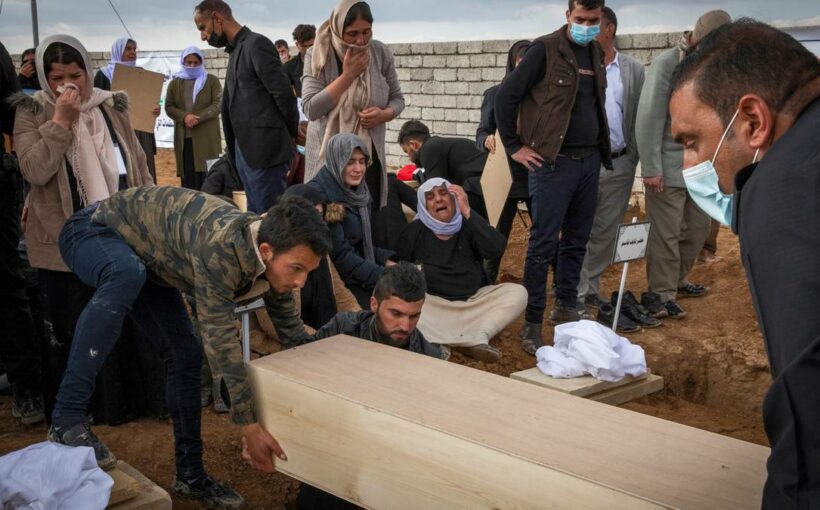 They had waited years to bury the remains of their husbands, sons and brothers. Cradling fresh earth draped in Iraqi flags, the Yazidi women called out as if their loved ones could still hear them.

On Saturday, the remains of 103 victims, members of the Yazidi ethnic minority group, were returned to the village where, seven years earlier, Isis rounded up and shot them, dumping their bodies into mass graves. The massacre became synonymous with the group’s campaign of genocide against the small religious minority.

Iraqi and international investigators exhumed the remains — including one more body returned elsewhere in the Sinjar district of northern Iraq — two years ago and identified them through DNA tests.

The gruelling, daylong ceremony to bury the 103 victims in Kojo was a stark reminder of the damage inflicted on the Yazidis by the Islamic State group, a tragedy dating to 2014 that has been compounded by years of government neglect.

The Islamic State killed up to 10,000 Yazidis and captured more than 6,000, most of them women and children, in what the United Nations and Congress have called a genocidal campaign on the ancient group and other religious minorities in Iraq.

After the plain wooden coffins were buried in Kojo on Saturday, relatives threw themselves on the grave sites, with women tearing at their hair, screaming in anguish and calling to their loved ones in a crescendo of mingled grief that could be heard far beyond the edge of the now-abandoned village. Volunteers stood by with stretchers to take those who had fainted to a mobile clinic.

The mourning was amplified by the collective grief over the loss of an entire community, where almost all the men and older boys were killed. Saturday’s ceremony is expected to be repeated as the UN and other organisations comb through dozens of mass graves yet to be exhumed.

“Oh my little brother, my little heart!” cried one woman. Another, doubled over with grief, recalled the new clothes her husband had bought just days before he was taken away and murdered.

“My brother is a handsome, tall guy, this grave is too short for him,” sobbed another woman.

Other graves remained unattended, with the victims’ entire families killed or still missing.

The massacre happened three months after the Islamic State seized the northern Iraqi city of Mosul in 2014 and declared it the capital of its self-declared caliphate. The Islamic State fighters surrounded Kojo, a farming village a few miles from Sinjar Mountain. Some of the fighters were from neighboring Arab Muslim villages the Yazidis had been friendly with for years.

The fighters separated women they deemed to be too old to be desirable and shot them in an adjoining town, forcing the rest of the women and many of the girls into sexual slavery.

It took almost three years for United States-backed Iraqi forces to drive the Islamic State from Iraq and two more years for forces led by the US and Syrian Kurds to take back the last Islamic State territory in Syria. More than 2,000 Yazidis are still missing.

Most of the Yazidis from Sinjar, the group’s traditional homeland, now live in camps for displaced people in the Kurdistan region of Iraq, waiting in abject poverty for their homes and villages to be rebuilt. A recent wave of suicides among young Yazidis speaks to the despair faced by a community shattered by the Isis massacre and subsequent government neglect.

Aid agencies say the area where the Yazidis live is still littered with Islamic State-era explosives, controlled by armed groups and torn by divisions among the Yazidis themselves.

The remains that were returned Saturday included two brothers of Nobel Peace Prize laureate Nadia Murad, who survived enslavement by the Islamic State.

As relatives lined up to carry the long line of coffins into Kojo, Murad took her place on the muddy road next to the coffin of one of her brothers. Another brother, Huzny, helped carry the coffin with one arm, encircling Murad with the other.

“We try to trick ourselves into thinking that this didn’t really happen to be able to go on with life,” Murad said.

But this was a day for remembering. Relatives of the victims, their shoes sticking in the cold mud and their faces contorted with grief, carried the coffins on the long walk into town and handed them over to an Iraqi honor guard.

“Today is a message to the whole world that the Iraqi government is not able to protect its minorities,” said Sheikh Naif Jasso, who was waiting to receive the coffins of his brother, the former village head, and the rest of the victims being transported from a nearby military base.

Jasso said the same applied to the Kurdistan regional government, which had been responsible for security in Sinjar until Iraqi government forces retook control in 2017.

Though the regional government has given refuge to Yazidis who were displaced from their homes, most Yazidis nonetheless feel betrayed by the Kurdish pesh merga forces, saying they had urged villagers to stay by pledging to protect them from ISIS.

Instead, when they were faced with the looming Islamic State onslaught, the Kurdish forces withdrew without warning in what their commanders called a “tactical retreat,” leaving the Yazidis to be massacred.

Murad and others fear that neglect of the Yazidi homeland is just finishing off what the Islamic State started.

“There are some clear signs that this community might disappear from their homeland and from Iraq,” she said.

“More than 100,000 Yazidis have emigrated since 2014,” she added. “There are entire communities, villages in Sinjar that are destroyed or abandoned.”

Most Yazidis have been resettled in Germany, Canada and Australia. While the United States has helped with funding for Yazidis in Iraq — through aid for camps, construction projects and investigations of Islamic State crimes, for example — the Trump administration took in very few Yazidis.

Saturday’s burial ceremony had been delayed for a year because of the pandemic.

Hours before the coffins arrived on Iraqi army vehicles, hundreds of village residents lined the road behind razor wire set up as a security barrier. Security forces patted down male visitors, and Yazidi women checked female visitors’ bags and even their hair for explosives or other weapons.

On the steps of a concrete house outside the village, a group of women burned incense while temple musicians stood by to play ancient songs of mourning.

One of the religion’s tenets is that when Yazidis die, they are reincarnated. But that has not lessened the pain for the survivors of the massacre.

Standing on the road with former neighbours, Elias Salih Qassim, a medical assistant, spoke of what had become of his family of six brothers.

“I am the only one who survived,” he said. Along with his brothers, the Islamic State killed his wife and three sons, the youngest aged 14, one of his sisters and three nephews. Qassim had been standing next to two of his brothers when they were shot.

He crawled out from under their bodies with bullet wounds to his legs. Traumatised, like thousands of other Yazidis, he spent the next four months recovering in the Kurdistan region, with only the concrete roof of a construction site for shelter.

Qassim says that a Baghdad morgue contains more than 200 other bodies also removed from mass graves and awaiting DNA testing.

“We want them to be handed over to us quickly, at once, rather than occasionally reopening our wounds,” he said.

In the abandoned village where the burial was held, Islamic State fighters had spray-painted “Islamic clinic” on the health care facility that Qassim ran. On another brick wall, the faintest outline of a painted black-and-white Islamic State flag remained. The school where villagers were rounded up has been turned into a memorial, with the names and photographs of those who were killed. It is likely no one will ever live in Kojo again.

The Kurdistan regional government had, until two years ago, provided funding to help rescue Yazidi women and children still being held captive. But that money ran out as world attention to their plight waned.

Abdullah Shrim, a Yazidi beekeeper credited with arranging the rescue of almost 400 Yazidis from the Islamic State through a network of smugglers in Syria, said money for such rescue efforts had dried up.

He says he is in contact with 11 women and children still held by families affiliated with the Islamic State.

“If there was support, there would be so much more that could be done,” he said. “But because there is a lack of support, we cannot work.”