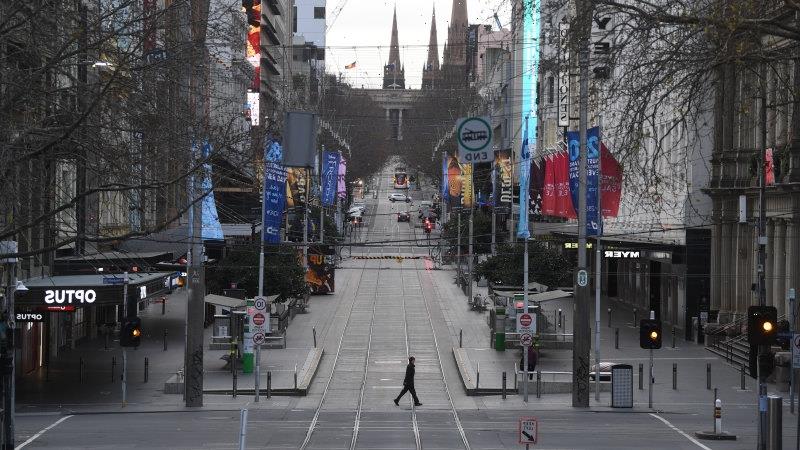 Victoria’s Delta outbreak is being fuelled by people under 40 who have been unable to secure a vaccination and are infecting others before contact tracers reach them.

The state’s lockdown is threatening to extend beyond five days, with 19 new local cases recorded on Saturday, taking the total number of infected people in the latest outbreak to 43.

More than 10,000 close contacts are isolating across Victoria.

A closed Myer store in the deserted Bourke Street Mall on Saturday.Credit:Justin McManus

Chief Health Officer Brett Sutton warned Victorians on Saturday to be ready for what could emerge over the next few days. “We just need to brace ourselves for any possibility,” he said.

In NSW, Premier Gladys Berejiklian announced 111 new cases and introduced stricter restrictions for some Sydney residents. NSW has been forced to ask for urgent help from other states to boost its contact-tracing capability, but Victoria has knocked back the request as it works on its own outbreak.

The request for help is an admission that NSW health teams are struggling to keep up with the rapidly growing number of coronavirus cases and is a blow to both the NSW and federal governments, which have long touted the state’s contact-tracing system as Australia’s “gold standard”.

More than 60 per cent of COVID-19 cases in Victoria are aged under 40, with those infected unlikely to be vaccinated, according to a government source who spoke on the condition of anonymity. Of the 54 active cases in Victoria, which include 11 infections acquired overseas, 33 people are aged in their 30s or younger.

Health authorities are concerned about the risks the infectious Delta variant poses to younger people, particularly with a slow vaccine rollout restricting their access to the jab.

Said Professor Sutton: “The infection patterns here and overseas tell us that younger adults, teenagers and people in their 20s and 30s absolutely become infected, especially with this Delta variant.

“There are young adults in hospital right now around the world, including in NSW with COVID-19, some with very severe illness.”

Victoria is due to come out of a five-day lockdown on Wednesday, imposed after NSW’s outbreak spread south, but there is no guarantee the state will re-open then.

Eighteen of the new cases were infectious in the community for an average of 1.7 days, a number health authorities said was a vindication of the decision to go into lockdown.

Victoria’s senior cabinet ministers met on Saturday to receive a briefing from Professor Sutton on the outbreak’s trajectory.

One minister, who also spoke on the condition of anonymity, said it was too early to make predictions about the length of the lockdown.

But a separate government source said it was improbable five days would be enough time to ensure all people who needed to be in quarantine were isolated.

Professor Sutton said the state had been “on a really good trajectory in terms of having every case linked.

“But we don’t know what’s around the corner … those super-spreading events are becoming more common with the Delta variant; the transmission within any kind of indoor setting is much higher than we’ve seen previously.”

On Saturday evening authorities were scrambling to contact soccer fans who watched the Euro 2020 final at a CBD pub on Monday morning.

The Western Public Health Unit was contacting people it suspected had been at the Crafty Squire on Russell Street, telling them to “get tested, immediately quarantine and contact those who attended with you, advising them to do the same”.

The Health Department added 14 new exposure sites in the town of Cowes on Phillip Island on Saturday, taking the total number across Victoria to more than 200.

The entire school community at Trinity Grammar in Kew has also begun 14 days of isolation after a new positive case was discovered.

Principal Adrian Farrer told parents and guardians on Saturday that he had been contacted by the Health Department and the parent of a year nine student.

“Very late last night I was contacted by the Department of Health and a year nine student’s mother today that her son had been confirmed as positive. He is feeling OK and the family are in good enough spirits,” he said. 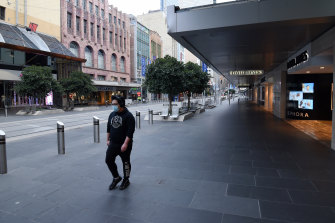 The AFL season was thrown into further chaos after it became known that players and staff from eight clubs had visited exposure sites in Victoria over the past few days, although all of them returned negative results after being tested.

The AFL confirmed the people involved had visited a tier 1 exposure site, which requires them to spend a mandatory 14-day period in quarantine, regardless of a negative test result.

Hawthorn released a statement confirming that player Conor Nash had been withdrawn from the game against Melbourne on Saturday night after he watched the Wallabies versus France rugby match at AAMI Park on Tuesday.

The Health Department has been contacting people who were near to the positive case who attended the rugby match.

The athletes’ village at the Tokyo Olympics also had its first positive case, raising new doubts about promises of a “safe and secure” Games.

The 2020 Games, postponed for a year because of the pandemic, are being held mostly without spectators and under tight quarantine rules. 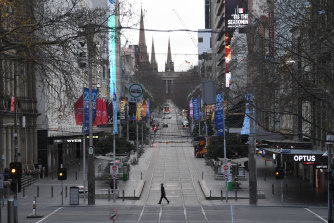 The view along Bourke Street towards Spring Street.Credit:Justin McManus

The workers began at the Ariele block in Maribyrnong on Saturday afternoon and were on standby to assist at Richmond’s Isola building, which has seven storeys and 23 apartments.

The Health Department and traffic controllers spent much of Saturday taping off the nearby area and closing footpaths to passers-by.

Locked-down residents could be seen on their balconies after being told on Saturday that they would need to remain in isolation for the next 14 days.

The fully vaccinated workers will perform tasks such as food delivery. They will also install air purifiers in the apartment buildings with the aim of dispersing any virus particles in the air in shared spaces.

Michael Forsyth and his partner, Melanie, run the Status Quo cafe at the base of the Isola and are now in two weeks of home quarantine with their 18-month-old daughter, Lily.

Mr Forsyth and his family opened the cafe just two months ago and have already faced two lockdowns.

“We got a call last night advising us to quarantine for 14 days as a precaution,” he said. “Everyone in the building is considered a close contact. It’s incredibly unfortunate for our small business, but it’s part of our responsibility as a community to do the right thing.”

Three removalists who allegedly had knowledge they were infected with COVID-19 before travelling from Sydney to regional NSW are among the latest people to apparently breach public health rules.

It is the second time the industry has been in the spotlight, after one of the Melbourne outbreaks was sparked by two removalists from western Sydney who worked at the Maribyrnong apartment building.

Victorian Health Minister Martin Foley said Victoria’s latest cases had been infectious in the community for an average of 1.7 days, which was a “vindication for the going hard and going early strategy”.

“There has been an average of less than two infectious days in the community, and that measure is really important because it shows the value of going hard and going early to make sure that we get our arms around this as quickly as possible,” he said.

“This lockdown was needed. We won’t be taking any chances by not acting on the information that we have. If we get the information to move and to move fast and hard, then that is precisely what we do.”

Mr Foley said the slow vaccination rollout in Australia was the “800-pound gorilla in the room”.

“We are in this position because our vaccination program has not delivered what we were told it was going to deliver,” he said.

“We are 38th out of 38 in the OECD, those countries that we measure ourselves against. We are the cellar dwellers. That is the issue that sets the context for all of the states.”

Professor Sutton said the Delta variant was different to previous strains of COVID-19.