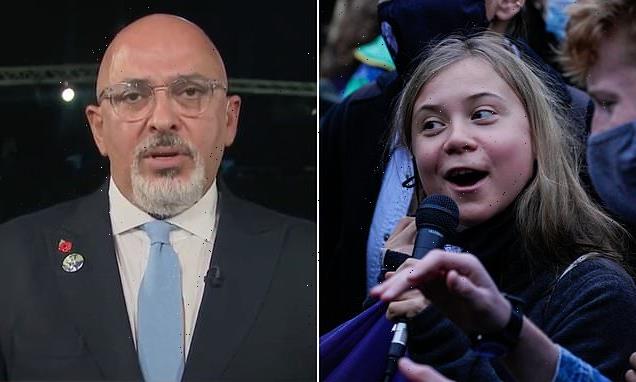 School’s NOT out for Greta: Education Secretary Nadhim Zahawi warns parents of child climate protesters that they could face FINES if they skip school to protest with Thunberg at Cop26 today

Education Secretary Nadhim Zahawi criticised young climate protesters for travelling to Glasgow to demonstrate outside Cop26 today – saying they should not be there in ‘school time’.

The senior Cabinet minister warned them it was their own time they were wasting and warned they faced handing their parents fines for truancy if they attend the march that will feature a speech by Greta Thunberg, 18.

Mr Zahawi said youth climate protesters should demonstrate at the weekend rather than during school hours.

The climate strike organised by Fridays for Future Scotland sees participants marching at 11am from Kelvingrove Park to George Square.

Asked on Times Radio whether he has been invited to join them, Mr Zahawi said: ‘No, I’m… I have to say, I wish they were doing it on a Saturday and a Sunday, not in school time.

‘I’d hate to get into a situation where headteachers and teachers are having to fine families and students. 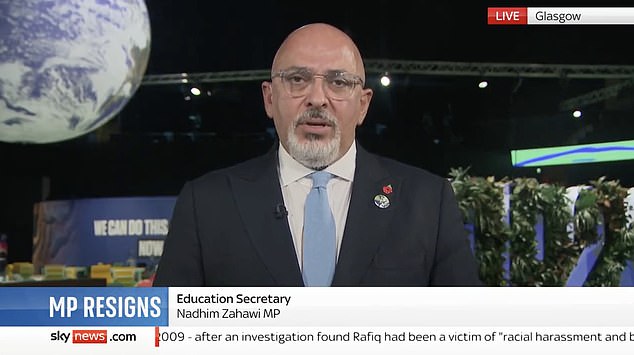 The senior Cabinet minister warned them it was their own time they were wasting and warned they faced handing their parents fines for truancy if they attend the march that will feature a speech by Greta Thunberg. 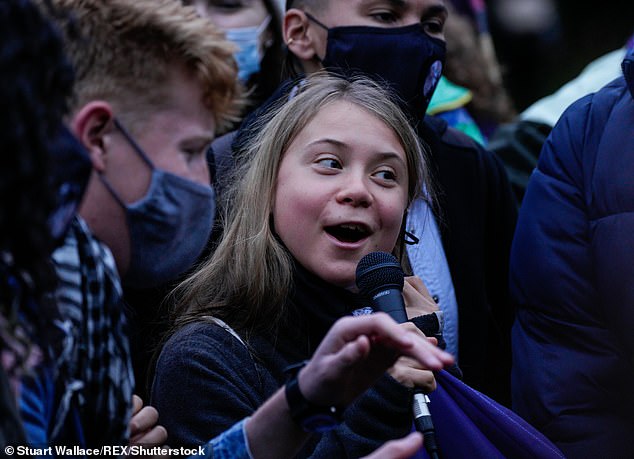 Thunberg, fellow activist Vanessa Nakate and other young campaigners, as well as local trade unionists, will speak to crowds at the end of the march through the city where the UN summit is being held.

‘We’ve got two weekends of Cop here in Glasgow when they can have lawful demonstrations, and they should have those and have the right to do that, and I would happily engage with anyone who wants to come and tell me exactly what they think.’

Local authorities have powers to fine parents if their children truant from school. Fines start at £60 but repeated offences can see them rise to £2,500, as well as possible jail terms of up to three months.

Youth activists are taking to the streets of Glasgow to demand action on climate change from leaders and politicians as the Cop26 talks continue.

Campaigner Greta Thunberg, fellow activist Vanessa Nakate and other young campaigners, as well as local trade unionists, will speak to crowds at the end of the march through the city where the UN summit is being held.

Ms Thunberg has been highly critical of the two-week conference, claiming it is the most ‘excluding Cop ever’ and labelling it a ‘two-week celebration of business as usual and blah blah blah’.

A group of mothers from around the world, including Rosamund Adoo Kissi Debrah, whose daughter Ella died from an asthma attack as a result of severe air pollution, will be handing in a letter at Cop26 calling for an end to new fossil fuel financing for the sake of their children’s health and future.

They will then join the youth strikers marching through Glasgow.

Friday’s protest comes ahead of marches on Saturday where tens of thousands of people are expected in Glasgow, with other marches in London and cities around the UK, as well as across the world.

The protests come at the end of the first week of the conference, where countries are under pressure to increase ambition on cutting the greenhouse gas emissions that are driving climate change, to avoid the worst impacts of warming, and to ensure finance for poor countries to tackle the crisis.

Earlier in the week around 120 world leaders gathered at the Cop26 summit to set out the action they were taking to tackle the climate crisis.

There have also been announcements on curbing deforestation, phasing out coal and boosting finance flows towards transforming economies to be green.

But shadow business secretary Ed Miliband warned against ‘shifting the goalposts’ to focus on long-term targets and vague announcements in various sectors instead of on urgent action by countries to cut emissions to get the world on track to limit temperature rises to 1.5C.

In an event on Thursday night US special presidential envoy for climate John Kerry said the Cop26 summit is a ‘critical’ event which he described as the world’s ‘last best hope to get us on course’.