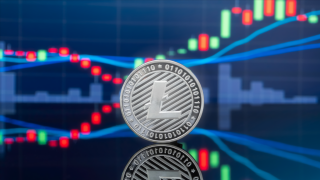 Gradual warming to cryptocurrencies by financial companies combined with both retail investments and institutional interest has carved the way for litecoin’s renewed momentum in 2021.

Litecoin is Riding the Bull Market to its Next Resistance Level

Litecoin had a challenging start. In late 2017 its founder, Charlie Lee, allegedly sold his entire bag of LTC “to concentrate on the project’s development.” Lee, understandably, received a lot of criticism for his decision.

The founder, that goes by the Twitter handle Satoshilite (a reference to bitcoin creator Satoshi Nakamoto) didn’t hold back, replaying a year later:

Interestingly though, LTC had a 5,000 percent jump in December 2017, though the market correction in 2018 brought it back to its pre-jump level of around $26.

The gradual warming up to cryptocurrencies from large institutions marks a significant shift in attitude compared to the last bitcoin boom in 2017. In October last year, Paypal partnered with New York chartered trust company Paxos, announcing it would allow its users to trade cryptocurrency directly from their Paypal accounts.

Square Inc, a financial services and payment company led by Twitter CEO Jack Dorsey, purchased $50 million of bitcoin shortly after, a decision that rewarded the company with a 10% rise. As far as litecoin (LTC), Visa launched an LTC-only Visa card that can be used digitally and physically in the United States.

All of these crypto adoptions work together to create a network effect, as crypto assets like ethereum, bitcoin cash, and litecoin seem to be some of the select altcoins that benefit the most. Moreover, Cryptwerk lists over 2,200 companies currently accepting LTC as payment.

LTC is currently the 8th most valuable crypto asset with a market cap above $14 billion this week.

The recent adoption from financial companies has been trickling down to retail investors. Litecoin has been on a bull run since September, with gains of over 350%. Though it’s been struggling to get past its critical resistance at $170 until recently, it is now breaking above this key level and riding the bull market to its next resistance level at $228.

Active addresses chart is clearly showing LTC momentum during the second half of 2020:

Drilling down to the beginning of 2021, transaction history also indicates steady growth for LTC; it’s a trend, no longer a singular jump:

Institutional interest followed when just last week Grayscale, the largest crypto asset manager in the world, purchased 6,987 litecoin, bringing the total value of Grayscale’s LTC assets under management to above $250 million. Institutional investments strengthen even more a coin’s trajectory as these kinds of investments are the result of thorough research combined with calculated, data-driven predictions.

The “original sin” of Lee came to a closing over the last weekend when Litecoin Foundation’s project director, David Schwartz, offered in a tweet a public redemption for Lee pointing out that Lee sold his LTC at an average value of $205, a value that now has been suppressed.

What is your sentiment toward litecoin – bullish or bearish? Let us know what you think in the comments section below.