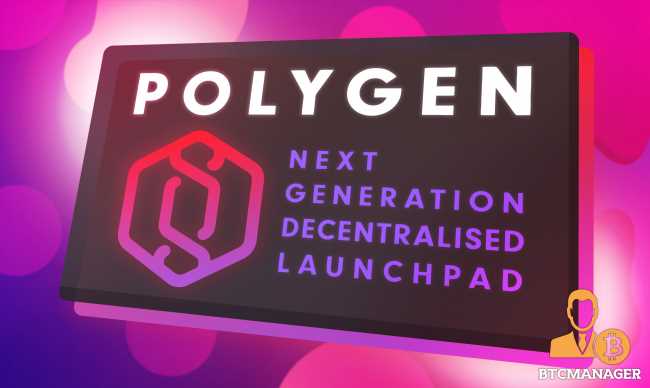 The world’s first decentralized launchpad without gatekeepers Polygen recently announced it has raised $2.3 million in its latest investment round.

Polygen Raises $2.3 Million in Fundraising Round

Polygen, a decentralized, innovative, and permissionless launchpad today announced the closure of its latest funding round, raising $2.3 million from several reputed investment firms.

Polygen differentiates itself from other launchpads in that it allows anyone to launch a project due to its permissionless nature. In addition, Polygen does not charge any fees from projects looking to launch on the platform.

In its latest funding round, Polygen raised $2.3 million.

Commenting on the development, a representative from Insignius Capital said:

“Insignius Capital is excited to embark upon this journey with Polygen. The current lack of transparency and decentralization shouldn’t be the norm for launchpads.  As such, we are committed to supporting Polygen in bringing decentralization and efficiency back to the launchpad sphere. We look forward to a positive collaboration with the highly regarded Polygen team.”

Prioritizing the Projects’ and Investors’ Interest

Polygen understands that rather than succumbing to the whims of the launchpad teams, it should be the project and the community’s interests that must be prioritized. Accordingly, Polygen has taken a new approach to launchpads in that it eliminates the role of gatekeepers that typically decide what projects get to raise funds on the launchpad.

By removing the middlemen, Polygen can be considered the Uniswap of launchpads as virtually anyone can list a project on the platform and leverage its launchpad services.

For instance, developers can choose to list their projects and use event-based tokens instead of permanent tokens. Such an approach would suit all project fund rounds, including seed, private, and public funding.

Polygen ensures that all transactions related to the launchpad process are stored on-chain to ensure complete transparency and accountability. At the same time, the platform ensures it doesn’t stifle innovation as it promises to let any team or developer to list their venture with zero fees.

“I am extremely excited to be part of the Polygen team.  Our industry-first, decentralized launchpad with no gatekeepers, is generating a lot of excitement in the crypto ecosystem. Furthermore, I believe Polygen represents a step-change in launchpad fundraising with Projects able to raise funds with complete freedom to innovate and experiment.”