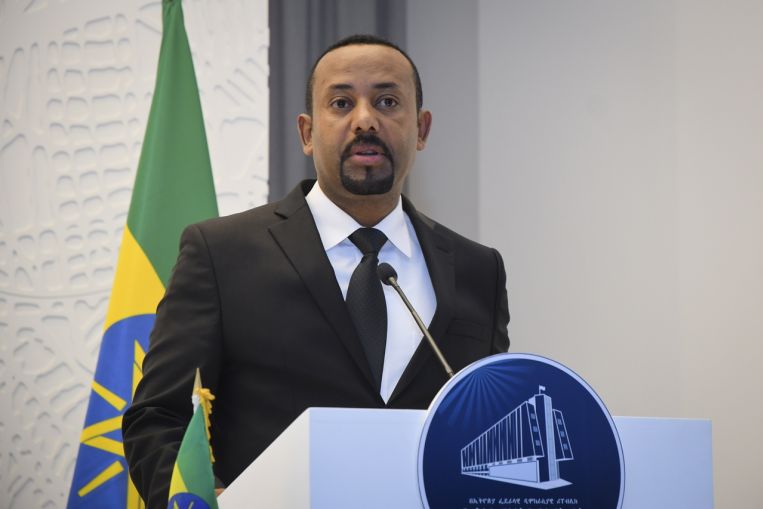 NAIROBI, KENYA (NYTIMES) – As rebel fighters drew closer to the capital on Wednesday (Nov 3), Ethiopia’s embattled leader appealed to his soldiers to defend the city “with our blood,” in a stark and inflammatory speech that heightened the mounting air of crisis in Africa’s second-most populous country.

“We will sacrifice our blood and bone to bury this enemy and uphold Ethiopia’s dignity and flag,” Prime Minister Abiy Ahmed said at the military headquarters in the capital, Addis Ababa, a day after he had declared a national state of emergency and called on Ethiopians to pick up arms and repel approaching forces from the northern Tigray region.

Mr Abiy, winner of the 2019 Nobel Peace Prize, made his comments as the top United Nations human rights body released a report that offered more evidence of gross human rights violations by all sides in the year-old conflict, including massacres of civilians, sexual violence and attacks on refugees.

Authorities claimed to be hunting for infiltrators, but analysts worried that, along with Mr Abiy’s heated talk, the detentions could foster ethnically motivated attacks in the city.

The United States Embassy has advised its citizens in Ethiopia to leave immediately, and on Wednesday it requested that Washington allow diplomats’ families and nonessential staff to depart the country on a voluntary basis, said a senior official who was not authorised to speak publicly.

The State Department, troubled by what it termed “the expansion of combat operations and intercommunal violence” there, said it was dispatching its Horn of Africa envoy, Jeffrey Feltman, to arrive in Ethiopia on Thursday.

Alarm started to spread through the capital over the weekend, after Tigrayan rebels captured two major towns about 258km to the north, following weeks of battle against Ethiopian government troops and allied ethnic Amhara militias. The rebels have claimed the capture of Dessie and Kombolcha in the Amhara region in recent days.

The Tigrayans have joined forces with a smaller rebel group, from the ethnic Oromo group, and are preparing a major push toward Addis Ababa, a spokesperson for the Oromos said on Wednesday.

Mr Abiy vowed to meet them with fire.

“The enemy is digging a deep pit – a pit that will not be where Ethiopia will disintegrate, but where they will be buried,” he said during a candlelit ceremony at the military academy marking one year since the war in Tigray erupted.

International pressure to halt the fighting, which has been accompanied by reports of rape, massacres and ethnic cleansing, has failed.

Efforts to bring even a modicum of accountability for those atrocities have also come to little, as evidenced by the United Nations report released on Wednesday.

Presenting a document packed with disturbing testimony from victims and witnesses, the UN’s human rights chief, Michelle Bachelet, said it pointed to “appalling levels of brutality” in the Tigray war that amounted to war crimes.

But the report by the UN body, which conducted the inquiry along with an Ethiopian government human rights commission, was written under significant government restrictions that critics said forced it to pull its punches.

Ms Bachelet said her team members had been subjected to intimidation and harassment during their research, and one was expelled on charges of “meddling in internal affairs.”

The investigators were unable to visit several sites where serious violations were said to have occurred and did not include testimony from any of the 60,000 Ethiopian refugees at camps in Sudan.

The final report stopped short of saying which side had committed the most atrocities, and rights groups protested that it engaged in false equivalence – appearing to equate the atrocities committed by Tigrayan forces, mostly in the early weeks of the fight, with a far greater number of serious crimes by Ethiopian forces and their allies over the next eight months.

Even so, it was the first official account of the litany of horrors in the war, which erupted in November 2020 after a simmering political feud between Mr Abiy and Tigrayan leaders.

After Tigrayan troops attacked a federal base in the region, government troops launched an offensive. The government troops were quickly bolstered by fighters crossing the border from Eritrea, the neighbouring country to the north.

A woman abducted from a bus described being gang-raped over 11 days by 23 Eritrean troops who left her for dead.

Days later, they said, Amhara fighters arrived to carry out revenge killings. An older man said he was among 600 Tigrayan men paraded naked through a village by Eritrean troops who mocked and photographed them.

Ms Bachelet denied that her team had been swayed by the Ethiopian government, whose federal human rights body jointly investigated and wrote the report. “Of course it is impartial,” she said. “The report stands for itself. I can say it was done very seriously.”

Human Rights Watch welcomed the report but said that it was “not an exhaustive account” of wartime atrocities in Ethiopia, and that a more thorough, independent inquiry was needed.

Several Western diplomats familiar with the work of the UN-led investigation acknowledged its limitations but said they hoped it might establish a foundation for future criminal prosecutions.

Yet the report fails to identify individual perpetrators, and Ethiopia’s judicial system has a poor record in bringing such cases to light.

Authorities say they have convicted seven soldiers of rape and put 20 others on trial, Ms Bachelet said.

But those proceedings lacked transparency and did not meet international standards, she added. She said she supported the creation of an international investigative body for Ethiopia along the lines of those already working on war crimes and atrocities in Syria and Myanmar.