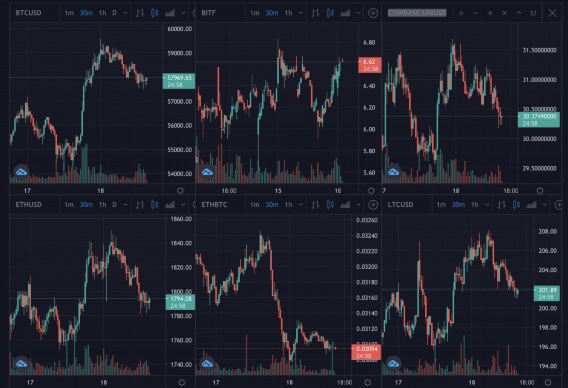 That’s on somewhat increased volumes of $60 billion, with one reason for this rise probably being the 90 million Biden checks that have made their way to American bank accounts.

Surveys suggest some $40 billion of this will go to bitcoin, with Fed’s chair Jerome Powell expecting any bump in inflation this year to be short-lived.

Interest rates therefore are expected to stay at zero until 2023, with Fed changing its policy to allow for higher than 2% inflation for some time.

That has increased bond yields to 1.7% for ten year treasuries because no one wants to buy government debt anymore, except the Fed which says it’s “not yet” time to talk about reducing their bonds and mortgage-securities purchases.

People therefore are getting out of bonds and presumably they’ll end up in stocks and cryptos, but during that transition they may park in fiat which perhaps explains the turbulences when yields first began rising.

Another big factor is the progress on tackling the pandemic. Bitcoin re-adjusted when there were suggestions this was all going very well, with Israel apparently all vaccinated now somehow.

However, things have become a bit of a mess. Biden has been accused of reckless hoarding of life saving vaccines that has left Canadians a bit wimpy with no one understanding why America is stockpiling AstraZeneca when they have not even approved it. Vaccines that could be put to good use in Canada or Europe or even elsewhere.

In Europe, things are becoming a bit explosive on two main fronts. The once heiled Germany for its handling of the pandemic now finds itself in a bit of a mess as it relies on a British invented vaccine which Germany and Europe was slow to approve.

Striking a fine line, Europe says their problem is not with the British government, but with AstraZeneca, threatening to ban vaccine exports from EU. Something met with a British response of hold up hold up.

Nationalism and vaccines finds no better match than in Serbia where they’re keen to brag of numba one in vaccinating 10% of their population with both shots of the vaccine.

Those same slavs kicked out by the mongols now kneel to China in gratitude on one front, while on the other beat their chest about subduing Kosovo which Germany has again left in the cold.

That’s bringing some political earthquakes in Germany where the greens may rise to chancellorship. Apparently, unlike the British greens these are very center, and some say even center-right, but mostly center-left.

The other potential shift is that Washington has an opening in Europe once again, especially in the Balkans which arguably have been the worst hit by EU’s mismanagement of the vaccines debacle.

The scale of it has now rang alarm bells following both Italy and Poland returning to lockdown.

Thus what a week ago was a speedy advance of the mobilized healthcare army, now looks like a chaotic front stalled by nationalism and by a lack of manufacturing capacity.

Something that may well mean nationalism is dead because at the end of it, it is nationalism that is currently killing people as it did in the last century and as it has always done.

Both stocks and bitcoin however seem to be enjoying all this, and the puzzling question is why?

The answer is presumably because both have risen due to print baby print, and if that temporary communism comes to an end, the suggestion is presumably there won’t be any fresh print to higher and higher.

However, if that printing is increasing inflation expectations, then both finite bitcoin and the somewhat finite stocks should benefit. Thus our theory is that the reason may well be just a temporary transition to cash while the funds make their way from what were safe bonds to bitcoin and stocks.

Bitcoin therefore should benefit from a reopening especially in a climate where interest rates are expected to stay at zero for the next two years.

Otherwise voters will harshly judge petty nationalistic politics which is better left to dictatorships than the civilized world.