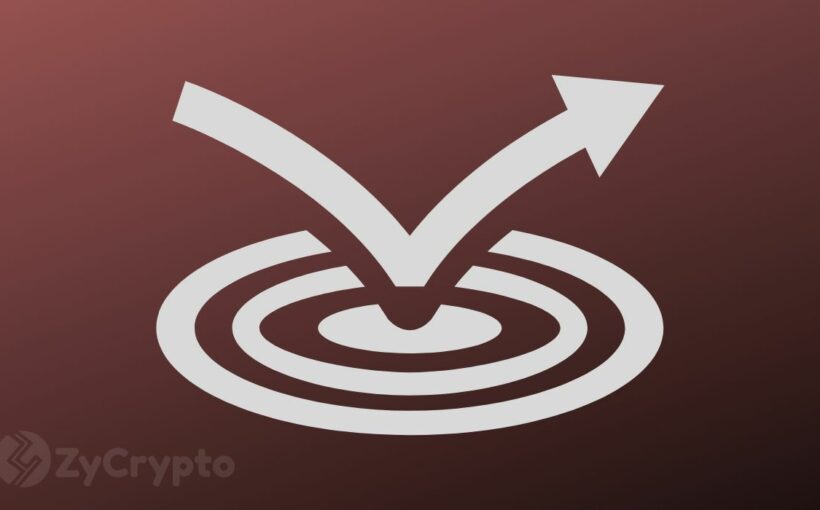 Despite suffering a severe sell-off in the face of uncertainties in the macro landscape, Bitcoin’s ebbing tide seems to be subsiding, with key metrics suggesting the cryptocurrency is poised to come ahead.

In its latest monthly report, Ark Invest, a Florida-based investment management firm, has pointed out the 200 weekly moving average, a key indicator that is signalling bitcoin could soon reclaim its lost glory.

Last month Bitcoin breached the said indicator after falling to the $17,000-$19,000 range and bouncing off its 2017 all-time support. Historically, price has resulted in a recovery of about 240% after it breaches this WMA. This is also the seventh time in the cryptocurrency’s lifetime that price has touched the 4-year trend.

“Those dynamics suggest that the drop below the 200-week moving average was a brief deviation, which increases our bullish conviction.” Ark’s report read. 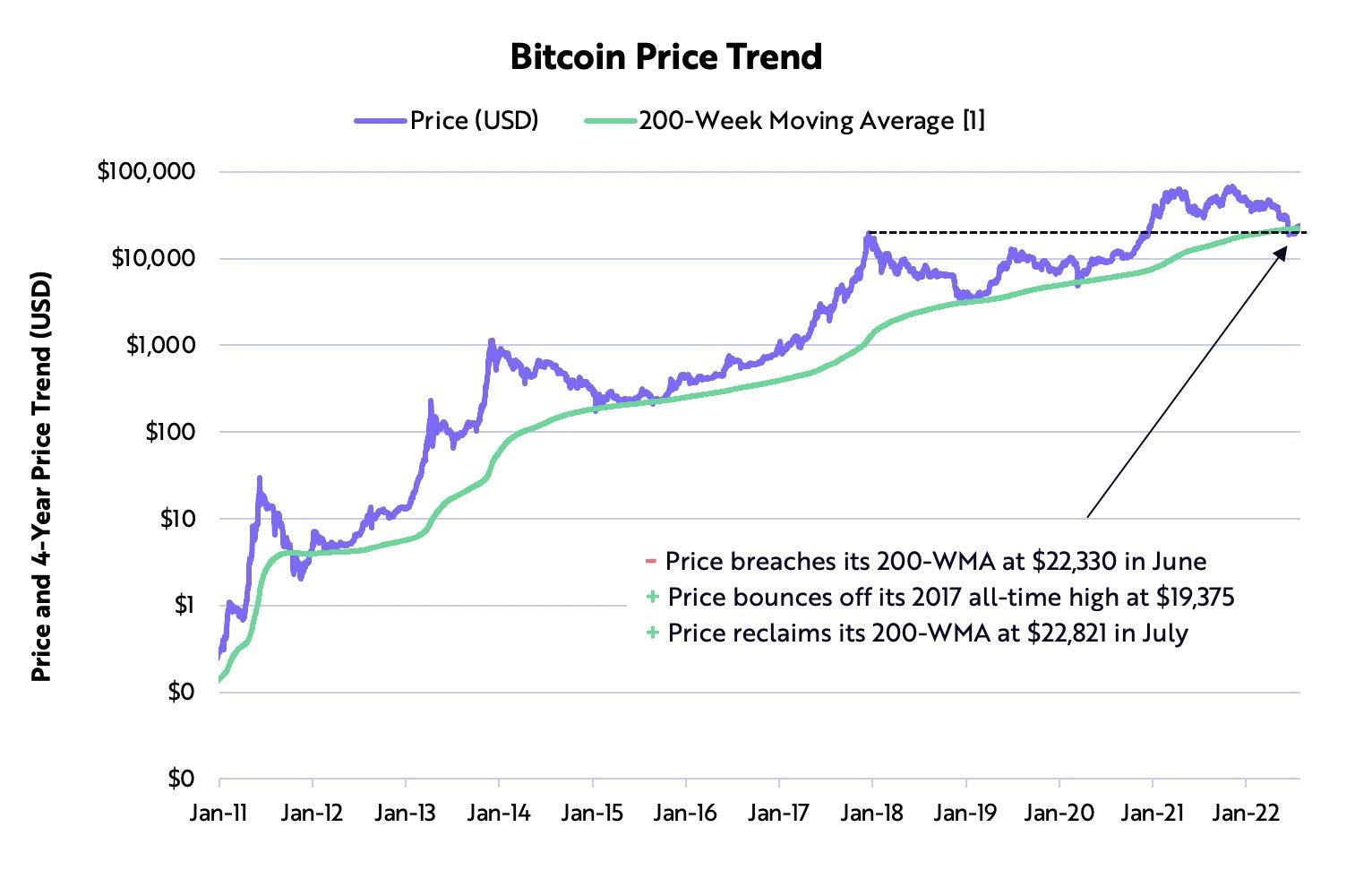 Mike McGlone, a senior commodity strategist at Bloomberg, also agrees that the 200 WMA could act as solid support for the price, terming July’s decline to its 100-and 200-week moving averages as the ‘steepest discount in Bitcoin’s history.’ “I see risk vs. reward tilted favourably for one of the greatest bull markets in history potentially starting a revival after a sharp and hasty retreat,” wrote Mike.

Some experts also believe that most obstacles to price, including the DeFi-induced sell pressure, have subsided, with the most significant threat being miners and a small group of long-term hodlers who may be selling to break even. However, Exchange inflows, particularly from retail investors, remain suppressed with the downward trend of Bitcoin in exchanges remaining intact. 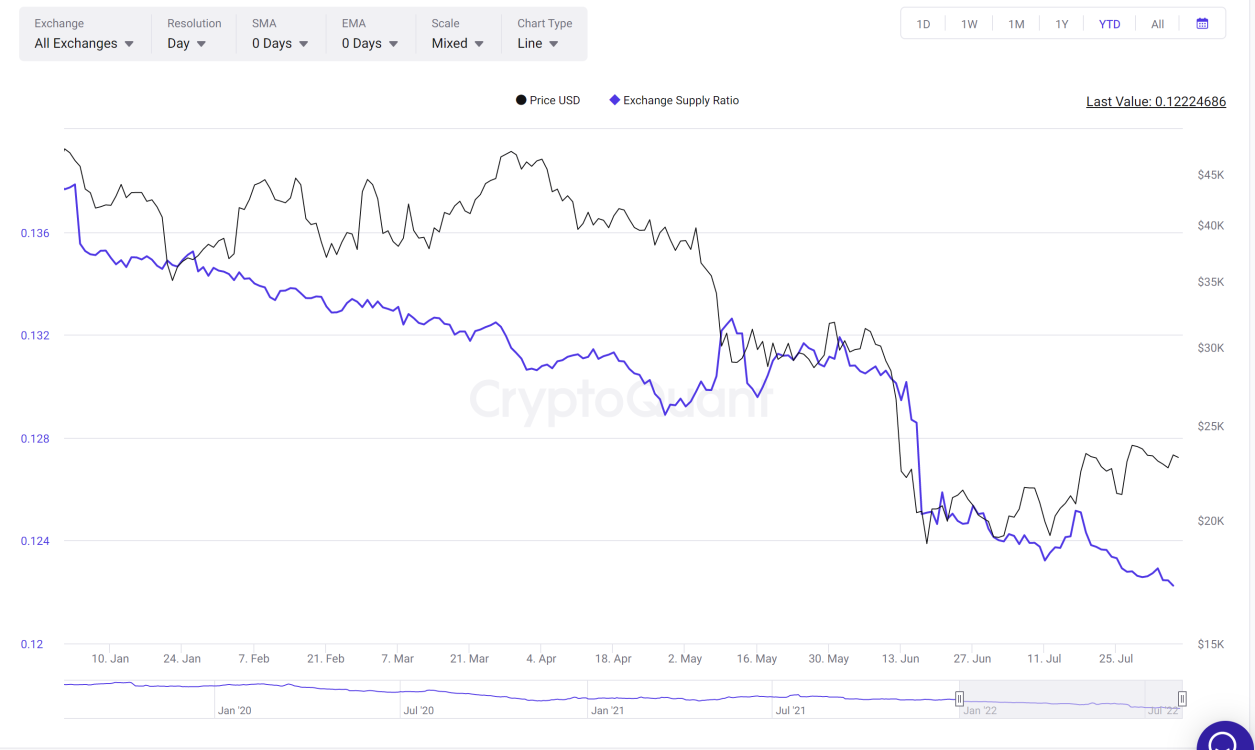 Technically, Bitcoin has been stuck in a bullish channel since bouncing off the yearly support at $17,800 in June. The $17,000- $23,000 range has also been proving to be a strong demand zone for the pioneer cryptocurrency, with roughly 3.4 million addresses purchasing 2.13 million BTC. Although the price still risks plunging by over 80% should it repeat previous bear markets trends, Ark Invest argues that it may not drop further since  “it did not rise parabolically during the 2021 bull market.”

Currently, BTC is holding atop the $24,500 support after a strong bullish close on Friday and faces a minor overhead resistance at $23,400. Most importantly, the price has been printing higher lows since July. According to crypto analyst Ali Matinez, the price could surge higher if enough buyer liquidity kicks, with the most critical resistance level falling between $31K and $41K, where 5.37 million addresses had previously purchased 2.55 million BTC.