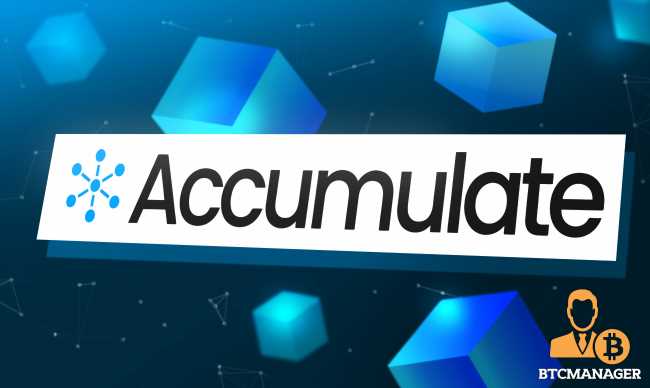 Accumulate (formerly Factom Protocol), a high-performance, universal layer-2 blockchain for decentralized finance (DeFi) and more, is quietly bringing a paradigm shift in the world of distributed ledger technology (DLT), via its revolutionary system of data, tokens, identity management, and more.

While there are hundreds, if not thousands of projects that claim to be the high-throughput distributed ledger that would finally help the world to overcome the serious issue of blockchain scalability, only a handful of the distributed ledger technology networks currently in existence are truly what they claim to be.

With decentralized finance (DeFi) gradually going mainstream, as more and more enterprises begin to gain awareness of the massive possibilities of DeFi, it has now become pertinent more than ever for the world to have truly robust, high-performance blockchain networks that fulfill the DeFi needs of both enterprises and individuals.

Launched as far back as 2015 by Paul Snow, the Chief Blockchain Scientist of Inveniam and Defi Devs, Accumulate Protocol is an identity-based, delegated proof-of-stake (DPoS) distributed ledger designed to power the digital economy through interoperability with layer-1 blockchains, integration with enterprise tech stacks, and interfacing with the World Wide Web.

Accumulate is a fast and scalable, high-performance blockchain with a new and highly unique configuration designed to power innovative DeFi solutions.

At 70,000 transactions per second (TPS), Accumulate is one of the fastest blockchains in the world. Accumulate solves the agelong problem of security, scalability, and decentralization by building its network entirely around Accumulate Digital Identifiers (ADIs) and adding validation to every layer.

In its litepaper, Accumulate explains that the Identifiers are not defined by tokens but by:

“Hierarchies of keys, which support more complex operations than are possible with the simple and constrained smart contract-based frameworks of other blockchain networks. The use of digital identities as the core basis of blockchain also offers greater flexibility over key management and enables the creation of independent chains that are processed and validated in parallel over the Accumulate network.”

For those who are unaware, the Accumulate Protocol blockchain project initially began as Factom, a data publishing layer atop major distributed ledgers. At the time, the primary objective of the Factom project was to bridge the wide gap in enterprise-level decentralized data solutions.

However, following a hugely successful Series A funding round that generated $8 million from notable names like Tim Draper and Medici Ventures, Factom Inc. decided to expand the scope of the project by building its blockchain-as-a-service organization.

The team says the name Accumulate is derived from the distributed Validator Accumulator architecture which the network employs.  In this system, hashes are accumulated over time as transactions take place on a network and set of identities. Validation is then distributed across identities and the hashes accumulate into the network summary every second, explains the team.

“Accumulate Protocol is more than just another blockchain; fundamentally reimagines how blockchains should be organized and organization matters. Accumulate will drive DeFi adoption by delivering innovative solutions. In this respect, Accumulate will become ‘the bridge to the digital economy,” the team added.