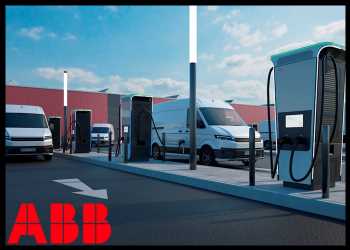 Swiss engineering company ABB Ltd. announced the launch of Terra 360 electric car charger with a maximum output of 360 kW, making it the fastest compared to other chargers currently available around the world. The device can deliver 100km of range in less than three minutes.

The world’s fastest electric car charger is capable of fully charging any electric car in 15 minutes or less.

It can simultaneously charge up to four vehicles. With the new charger, drivers will not have to wait for their turn to charge, instead can pull up to another plug.

The innovative all-in-one Electric Vehicle or EV charger will be available in Europe by the end of 2021, and in the USA, Latin America and Asia Pacific regions in 2022.

The Terra 360’s innovative lighting system guides the user through the charging process and shows the State of Charge or SoC of the EV battery and the residual time before the end of an optimal charge session.

ABB noted that the EV charger is also wheelchair accessible and features an ergonomic cable management system that helps drivers plug in quickly with minimal effort.

Along with fueling stations, convenience stores and retail locations, Terra 360 chargers can also be installed in an organization’s commercial premises to charge electric fleet cars, vans and trucks. With its small footprint, the chargers can be installed in small depots or parking lots where space is at a premium.

Terra 360 chargers are fully customizable, allowing customers to ‘brand’ the chargers by using different foiling or changing the color of the LED light strips. There is also the option to include an integrated 27″ advertisement screen to play video and pictures.

Noting that road transport accounts for nearly a fifth of global CO2 emissions and e-mobility is critical to achieving the Paris climate goal, ABB also said it will switch entire fleet of more than 10,000 vehicles to non-emitting vehicles.

Frank Muehlon, President of ABB’s E-mobility Division, said, “With governments around the world writing public policy that favors electric vehicles and charging networks to combat climate change, the demand for EV charging infrastructure, especially charging stations that are fast, convenient and easy to operate is higher than ever.”

ABB said it has sold more than 460,000 electric vehicle chargers across more than 88 markets.