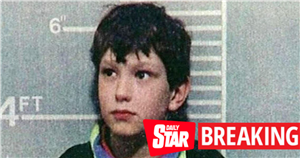 Jon Venables is not dead despite rumours trending across the UK on Twitter tonight, the Ministry of Justice has confirmed to the Daily Star.

Venables was 10 years old when he abducted, tortured and killed 2-year-old James Bulger alongside his friend Robert Thompson in Bootle, Liverpool, on February 12, 1993.

The convicted killer and child sex offender was released from prison aged 17 in 2001.

But he was re-imprisoned in 2010 for possession of child sex abuse material.

He has since been given a new identity and lifelong anonymity, meaning his assumed name and image can never be revealed to the public.

Rumours on Twitter spread throughout Wednesday evening and even saw Venables become one of the UK's top trending topics.

Thousands of Twitter users speculated, alleging the media and the authorities were hiding the truth of his death.

But a Ministry of Justice spokesperson poured cold water on the rumours.

The spokesperson told the Daily Star at 9.01pm on Wednesday October 6 they were aware of the rumours spreading via Twitter, but that there was no truth to them.

They said: "I can confirm this is not true."

A source added that such speculation was "nonsense".