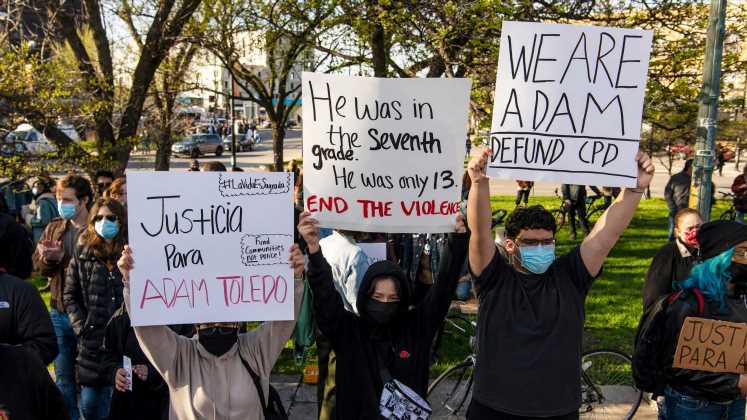 CHICAGO — People gathered around Chicago on Sunday to remember a 13-year-old boy fatally shot by a police officer and to call for changes in policing and an end to gun violence.

Sunday’s events followed the release of body-camera footage showing Chicago police Officer Eric Stillman shoot Adam Toledo less than a second after the boy dropped a gun, turned toward the officer and began raising his hands. Stillman chased the boy down a dark alley on March 29 after responding to a call of gunshots.

A “peace walk” was held Sunday in Little Village, the predominantly Latino southwest Chicago neighborhood where Adam lived and was killed. A gathering on the city’s north side addressed racism, and other vigils were held around the city to remember Adam and others killed by police.

Largely peaceful demonstrations have been held each day since the video was released on Thursday. Attendees have criticized the Chicago Police Department for a long history of misconduct, particularly in Black and Latino neighborhoods, and called for justice for Adam, who was Latino. Stillman is white.

‘Will not stop until there is justice’: Over 1,000 in Chicago gather to remember Adam Toledo

Evolution of a city’s account: How Chicago’s narrative changed in the fatal police shooting of Adam Toledo

The events also have called attention to other recent killings by police, including the death of George Floyd in Minneapolis — Derek Chauvin is on trial for Floyd’s death — and the recent fatal shooting of another Black man, Daunte Wright, in a Minneapolis suburb.