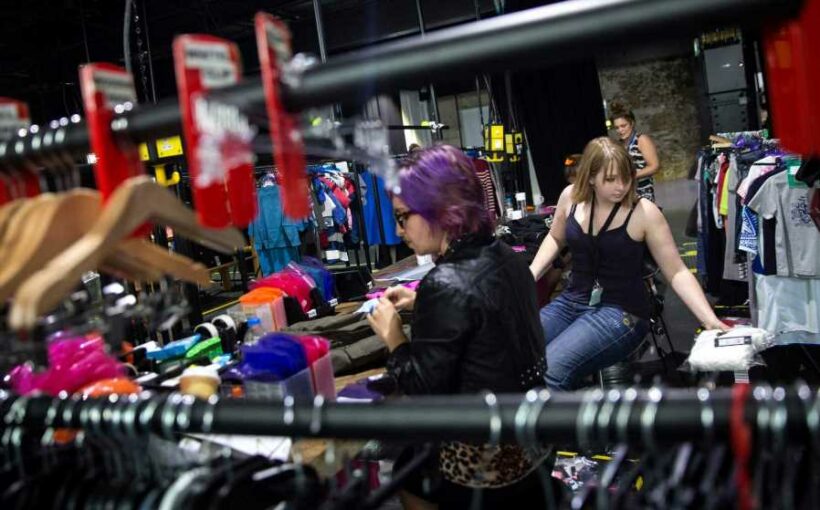 No matter what Amazon and Walmart tout during Prime Day, clothing will be on shoppers' minds this week as consumers prepare to reunite with friends and family or look to accommodate extra pandemic pounds.

Competition in the apparel space is more cutthroat than ever. Amazon recently unseated Walmart as the top apparel seller in the U.S. and both companies have a desire to woo fashion-forward shoppers, not just help stock up on the basics.

Vincent Quan, associate professor at the Fashion Institute of Technology, said the two retailers can drive more sales if they keep up with trends, along with selling socks and basic T-shirts.

"The historic turn rate of fashion goods is faster, and that's an important component because faster turn means additional purchases," he said.

Amazon Prime Day started Monday and ends Tuesday. Walmart has an overlapping sales event, Deals for Days, that began Sunday and runs through Wednesday. Other apparel-focused retailers are offering up their own deals, including Target, Kohl's and resale website, ThredUp.

Online and in stores, shoppers can find dresses, shorts and other wardrobe additions at Walmart for up to 60% off — along with a mix of other discounted items from puzzles to cordless vacuums.

Amazon began slashing clothing prices two weeks before Prime Day. It is now promoting "The Prime Day Big Style Sale," which includes discounts on active and loungewear for up to 40% off, while Amazon's own apparel brands are up to 30% off.

Amazon often uses Prime Day to point customers toward its own brands. Last year, sales of Amazon's brands made up 15% of its total sales and, when excluding third-party sales, a quarter of the total, according to consumer transaction data collected by 1010data. That includes sales of Amazon-made devices, such as Echo smart speakers, Fire TV streaming sticks and tablets.

Shoppers are taking notice of the apparel promotions. Among the clothing, shoes and jewelry products on Amazon, Under Armour has been the top brand with about 15% of the best-selling items, followed by Carter's and Levi's with 11% of the top sellers and Amazon Essentials with 7%, according to a research note on Tuesday by BMO Capital Markets.

Rising swimwear and denim sales in the spring were among the earliest indicators of the comeback, said Kristen Classi-Zummo, apparel industry analyst for NPD. Swim is up 19% so far this year compared with 2019 and sales of jeans have risen 10% compared with 2019, according to NPD.

Three major factors have lifted clothing sales, she said: Americans are going out and preparing for the return to the office and the classroom in the fall. A new fashion cycle of looser fitting denim has rippled through the wardrobe, inspiring a search for tops and shoes that match.

Then, there are the people who no longer fit into old clothes. Nearly 40% of women and 30% of men said they are wearing a new size, according to an NPD survey of consumers in the spring. They credit exercise in the home gym or blame snacking because of stress for the change.

The pandemic pushed even reluctant shoppers who prefer to touch and feel clothes at the mall toward websites and apps. Apparel dollars spent online accounted for about 24% of total apparel sales in 2019, according to NPD data. That rose to 34% in 2020.

"We have seen apparel sales online jump in a year what would have taken five years," Classi-Zummo said. "I don't anticipate online [apparel sales] going back to where it was."

As the pandemic shifted more shopping online, Amazon overtook Walmart as the number one seller of apparel, according to a Wells Fargo report in March. Wells Fargo estimates Amazon's apparel and footwear sales in the U.S. grew by roughly 15% in 2020 to more than $41 billion, which is 20% to 25% above rival Walmart.

The e-commerce giant is nipping at Walmart's heels in more ways than one. With more than 1.3 million employees worldwide and a rapidly growing headcount, it's poised to snag Walmart's spot as the nation's largest employer as soon as next year, according to the World Economic Forum. By 2022, analysts expect Amazon will surpass Walmart and become the largest U.S. retailer.

Read more about what Amazon and others have planned for this year's sales events:

The retail giants compete across many categories, but apparel has become an area where both have sought to gain market share.

Like Amazon, it has used its third-party marketplace to broaden selection. One of its partners is ThredUp, a secondhand apparel site that sells brand names at a lower price. It has more than 1,000 apparel brands, including its exclusive labels, according to a company spokesperson.

Amazon found early success by selling a wide range of basics from popular third-party brands like Calvin Klein and Adidas. Over the last few years, it quietly expanded its lineup of private labels. That includes Amazon Essentials, which ranges from maxi dresses to baby clothing. It has exclusive lines like Lark & Ro for women's fashion, Spotted Zebra for kid's clothing and Buttoned Down for men's businesswear.

Amazon and Walmart declined to share the number of private label apparel brands. But last year, retail analysts attempted to size it up. Amazon has at least 111 private labels that have more than 22,000 products, according to a Coresight Research report published in May 2020. Most are in apparel, with 12,222 products and 87 brands falling into the category, Coresight found at the time.

Amazon has increasingly incorporated trendier styles into in-house brands and sold upscale items through online luxury fashion shops. In 2019, it launched The Drop, a line of limited-edition collections curated by fashion influencers, such as Kendall and Kylie Jenner.

Amazon has several advantages on its side — chief among them vast swaths of powerful first-party consumer data. It has a loyal base of more than 200 million Prime subscribers that already turn to it to buy everything from household essentials and TVs to books and toys. The majority of U.S. adults start their shopping journey on Amazon.

Walmart beats out Amazon with its huge physical footprint, which spans more than 4,700 stores nationwide, not including its Sam's Club locations.

"It allows people to shop things, try things on and just engage with the products in a little bit more meaningful of a way," said Katie Thomas, leader of the Kearney Consumer Institute. "So I think that works in their favor."

While Amazon and Walmart are a force in online apparel, challenges lie ahead. The retailers must still prove to some consumers that they are fashion destinations. Both have low prices, but the huge selection can overwhelm consumers.

Thomas said the retailers need to create a more curated experience and guide customers by working with influencers or suggesting head-to-toe looks.

"That can help people figure out how to put things together or how they can achieve a high-low look with things from Walmart or Amazon that were traditionally H&M or Forever 21," Thomas said.

She said apparel is far more complex than other merchandise because shoppers must find the right fit. "It's just a lot different than shopping for garbage bags and kitchen shears," she said.

Fashion-forward merchandise comes with higher risks, which can hurt profitability, said Janine Stichter, senior vice president of apparel and footwear at Jefferies. Socks and other basics are less likely to get skipped over due to weather, returned because of poor fit or moved to the clearance rack. A cute dress or a top, however, is more likely to get shipped back by shoppers who don't think it looks quite right or don't see it as the special outfit they searched for, she said.

Online return rates are 30% for women's apparel and 20% for men's apparel, according to estimates by Jefferies.

Both companies seem to have recognized these challenges. Amazon recently launched a dedicated section on its site for "internet famous products," making it easier for people to find items that have become popular or gotten featured by an influencer on TikTok. Walmart has tapped into the power of social media, too, by guiding consumers toward potential purchases during shoppable livestreaming events.

Walmart will soon have a new tool to tackle a dilemma that's plagued shoppers and retailers alike. It's acquiring virtual fitting room start-up Zeekit, which allows customers to upload photos or choose from models that resemble their height, shape and skin tone, so they can see how an item would look. It allows the shopper to share a virtual outfit with a friend on social media, too.

With the technology, Walmart could reduce returns and the cost that comes with them.

Amazon has launched a dizzying array of fashion-focused services designed to simplify online clothing shopping. It has Prime Wardrobe, a try-before-you-buy service similar to Stitch Fix, and StyleSnap, an in-app image recognition tool lets users upload a photo of a look and, in turn, serves up a similar product. Another service, called Made for You, aims to make sizing easier by using a shopper's measurements to produce a custom-fitted T-shirt.

It's also attempted to simplify returns by offering scheduled at-home pickup via UPS or shoppers can drop off unwanted items at Kohl's.

For Laura Bambrick, Walmart and Amazon's expanding fashion lines have meant more wallet-friendly options. The mom of two, who lives in Naperville, Illinois, began a fashion blog as a hobby when she had her 8-year-old daughter, Claire, as a way to make sure she didn't slip into a uniform of yoga pants.

Bambrick sticks to a monthly budget of $150 — stretching those dollars across an average of five pieces from retailers including Old Navy, Target, Amazon, Walmart and some thrifting websites like Poshmark. More items have been coming from Amazon and Walmart, she said, explaining she shops Walmart's Scoop and Time and Tru brands and orders classic pieces from Amazon Essentials and brands it carries like PrettyGarden.

"Five plus years ago, I would have never thought to order any kind of clothing from Amazon, but now there are a lot of cute dresses and things like that," Bambrick said. "Sometimes, the quality isn't as great or the fabric isn't as nice, but their return policy is so good that it's worth taking a chance."

Yet she said both retailers still have "an uphill battle" because of the stigma of shoppers who see them as cheap quality or unfashionable — a view she used to have, too. Low prices may draw in shoppers, but the clothes must hold up in the laundry.

"Once you take that chance and you're like 'Oh, it's not pilling or falling apart' then you're more willing to take the chance again and again and it becomes more of a staple in your wardrobe or a staple place to shop," she said.