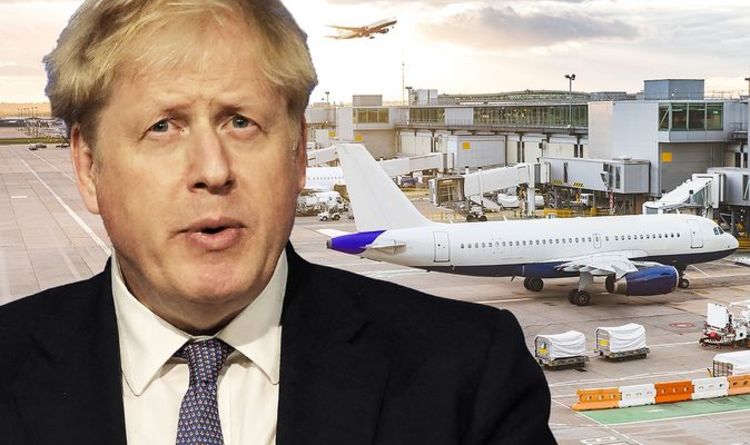 The Government is set to make an announcement on travel rules later today – and there is an expectation of pre-departure tests for travel to the UK being dropped. Industry body Airlines UK and Manchester Airports Group, which also operate London Stansted and East Midlands airports, are calling for the removal of all testing requirements – claiming data shows they are not effective in reducing the spread of Omicron in the UK. The research, conducted by Oxera and Edge Health, found travel restrictions imposed in late November had little effect on Omircon case rates. It suggests removing restrictions in January would have no impact on the spread of the mutation.

The spike in Omicron cases is regularly breaking records in relation to the daily number of UK citizens infected.

Even if the Government had put in place pre-departure and Day 2 PCR testing from early November, the research claims a peak would only have been three percent lower and delayed by five days.

The findings suggest domestic restrictions would be the only way to reduce the spread of Omicron now it is the dominant variant.

In a joint statement, Manchester Airport Group CEO Charlie Cornish and Airlines UK CEO Tim Alderslade said: “The Health Secretary rightly acknowledged as early as December 8 that the value of any form of restrictions was significantly reduced once Omicron became dominant in the UK.

“This latest research by Oxera and Edge Health clearly supports the position that travel testing requirements can be removed in full without impacting overall case rates and hospitalisations in the UK.

“It should give the UK Government confidence to press ahead with the immediate removal of these emergency restrictions, giving people back the freedom to travel internationally to see loved ones, explore new places and generate new business opportunities.

“Travel restrictions come at huge cost to the travel industry, and to the UK economy as a whole, placing jobs at risk and holding back the recovery of one of our most important sectors.

“It is therefore vital they do not remain in place a day longer than is necessary.”

Airlines UK has been calling for an end to travel restrictions for some time, with Mr Alderslade warning over the need for Government support if measures continue.

The group points out that aviation has received no direct support since the end of furlough despite still being under direct restrictions.

Manchester Airport Group saw recovery in passenger numbers at its airport fall more than 30 percent after Omicron measures were introduced.

According to one study at the time, also conducted by Oxera, extra testing in response to Omicron reduced UK aviation’s contribution to the economy by £60m a week.

The travel industry is hoping the Government will take note of the findings of both studies when it reviews travel restrictions today.

Health Secretary Sajid Javid previously said justification for the rules would be “minimised” if Omicron became the dominant variant with the PA news agency also reporting Transport Secretary Grant Shapps is understood to be pressing for relaxing restrictions.

Under the current rules, all travellers aged 12 and over entering the UK have to show proof of a negative test taken within two days of departure. This can be either a PCR or lateral flow test.

They then need to take a second test, which must be a PCR test, within two days of arrival.

Despite the toll of restrictions, shares in airlines entered 2022 with a strong start when markets opened for the first time since the new year yesterday.

Both BA operator IAF and easyJet rose over 10 percent, with markets more broadly buoyed by optimism over reports that Omicron will prove a more mild variant.