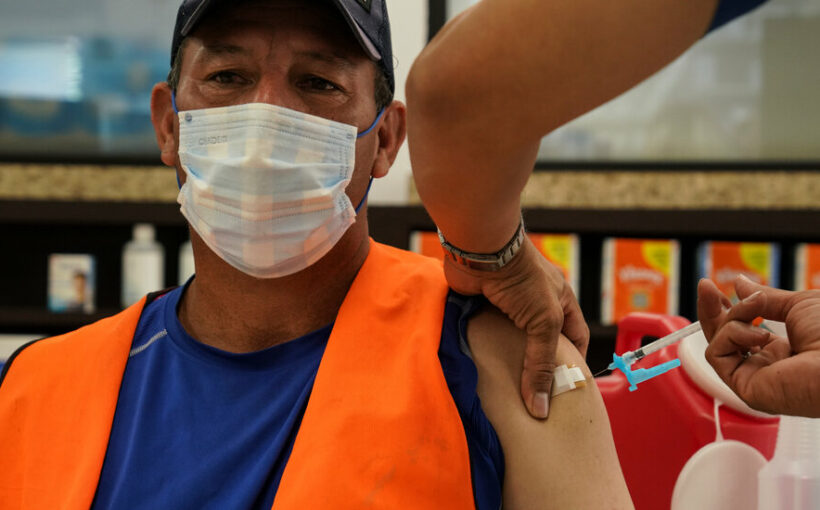 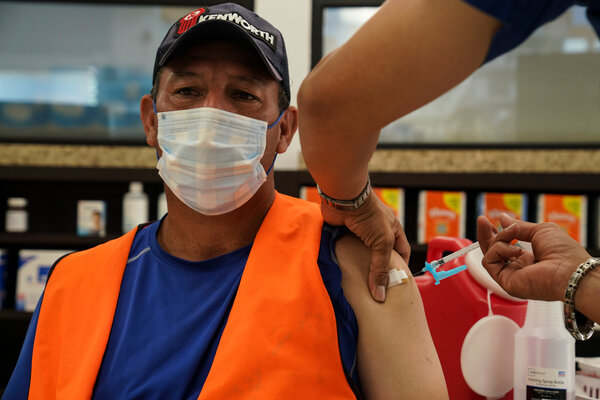 As they approach the limits of persuasion and incentives, the biggest question facing companies is whether to make coronavirus vaccines mandatory for workers. This is legally allowed, but many companies are still worried about political implications, employee pushback and other issues.

Also of concern is what competitors are doing, which is why C.E.O.s have been hustling behind the scenes to figure out their counterparts’ plans, gauging if the time is right to change their vaccine policies without standing out from the crowd.

The Business Roundtable is surveying members about their plans, DealBook hears. The influential lobbying group, led by Walmart’s Doug McMillon, declined to make the results public, but the results indicate that more companies are considering vaccine mandates compared with a few months ago, we understand.

The White House wants C.E.O.s to help persuade others. President Biden met with executives of companies that have mandated vaccination, including Scott Kirby of United Airlines, to discuss how they could encourage fellow business leaders to do the same. Since United issued its mandate (to a work force that was largely vaccinated), it has held a number of town hall meetings to discuss it. Frontier and Hawaiian Airlines issued their own mandates after United’s, and Alaska Airlines told employees it was considering doing the same.

Is that enough? Most companies have been reluctant to announce mandates covering all employees. But the initial trickle of mandates has become a steadier stream of announcements. Many believe that the F.D.A.’s full approval of the Pfizer-BioNTech vaccine, expected within weeks, could turn that into a flood.

“A few weeks from now, this is going to be something that’s widespread across the country because it’s really just a basic safety issue,” United’s Kirby told CNN after the White House meeting.

The largest teachers’ union backs a coronavirus vaccine mandate. The three-million-member National Education Association endorsement follows a similar pronouncement from the American Federation of Teachers. The move comes as more companies delay their office return dates; Facebook pushed back its return to January from October.

The census showed that the U.S. grew significantly more diverse over the past decade. Overall population growth slowed, with the once-a-decade survey recording a drop in the white population for the first time. This may be attributed, in part, to people who previously identified as white now choosing more than one race.

A large high-frequency trading firm is getting into the meme-stock business. Jump Securities is starting a unit that will process orders from Robinhood and other retail brokerage firms, a sign that small investors are a bigger force in the market. Meanwhile, Cineworld, the owner of the Regal movie theater chain, says it might list its shares in the U.S., a way to tap the interest of retail traders who made the rival movie chain AMC a meme-stock winner.

Senator Rand Paul admitted this week that he failed to disclose his wife’s purchase of stock in Gilead Sciences, the maker of a coronavirus treatment, in the early days of the coronavirus outbreak. The trade in February 2020 was small and not profitable. And there is no evidence it was made based on insider information gleaned by the Republican from Kentucky.

But the delayed disclosure, 16 months after the filing deadline, which Paul’s spokeswoman says was an oversight, again raises questions about whether stock trading by lawmakers and their families is properly policed.

The Stop Trading on Congressional Knowledge, or STOCK, Act, passed in 2012, requires lawmakers to disclose trades within 45 days. This was supposed to eliminate the appearance that they use their influence and access for profit. Nearly a decade later, Paul’s trade disclosure is the latest example of how the law has fallen short.

At least a dozen lawmakers have recently revealed that they missed disclosure deadlines, including Representative Debbie Wasserman Schultz, Democrat of Florida, and Senator Tommy Tuberville, Republican of Alabama. “There is absolutely a trend of more people filing late,” said Kedric Payne, a senior director of ethics at the Campaign Legal Center.

The disclosure rules are rarely, if ever, enforced. STOCK Act disclosures have led to some high-profile investigations, but experts told DealBook that they couldn’t think of a single case that the Justice Department has brought under the act’s disclosure rules. “If the Justice Department went after more of those cases, I’m sure lawmakers would more diligently comply,” said Virginia Canter, a lawyer for the Citizens for Responsibility and Ethics in Washington.

Penalties under the law are minor. The STOCK Act gives the Justice Department the ability to bring criminal charges, but the bar is high. And the law caps civil fines at $50,000. In practice, violations are generally resolved with a minimal fine, typically as little as $200 for a first-time offense.

Read more: Andrew’s column from January discussed how the S.E.C. could change a rule for broker-dealers that would end questionable stock trades by lawmakers, without the need for new legislation.

“You don’t have to have the highest IQ to run a successful business.”

— What Ryan Cohen, the billionaire entrepreneur who took over as chairman of the meme-stock darling GameStop, has often told friends, according to a profile in The Wall Street Journal.

Disney reported its latest quarterly earnings yesterday. The Times’s Brooks Barnes, who has covered the company since 2007, writes for DealBook about a major change in its focus.

I’ve seen Disney undergo tremendous change — big acquisitions, big leadership shake-ups, big shifts in consumer habits. But one change has been rather jarring. For years, quarter after quarter, the only Disney business that really mattered was the division that ran the company’s vast collection of cable and broadcast TV assets. But now, that hardly seems to get any attention at all.

Traditional TV networks remain Disney’s most profitable business — by far — but they had an extremely tough quarter, with ad revenue and subscriber fees only partly offsetting higher programming costs. (Disney’s finance chief told analysts to expect more of the same in the future.) The division’s quarterly operating income fell 33 percent from a year ago, to $2.2 billion.

There was a time when just a 3 percent decline in the media network division’s earnings would send Disney’s stock into a tailspin. On Thursday, nobody batted an eyelash.

Investors seemed to care only that Disney+ had signed up 12.6 million new subscribers to the streaming service, lifting its global total to 116 million, which beat Wall Street’s expectations. Disney+ remains a long way from profitability, but Disney’s stock jumped 5 percent in after-hours trading on the news.

Antitrust activity is heating up this summer, with new bipartisan legislation aimed at Big Tech just introduced in the Senate and federal agencies adopting a skeptical stance on dealmaking. “I believe the antitrust agencies should more frequently consider opposing problematic deals outright,” the F.T.C. chair, Lina Khan, wrote in a letter to Senator Elizabeth Warren, Democrat of Massachusetts, released yesterday.

The tough talk advances the Biden administration’s position, expressed in a sweeping executive order last month, that cracking down on consolidation protects consumers, markets and workers. But some antitrust lawyers, including former regulators, tell DealBook that they fear this stance can chill legitimate deals and give enforcers the impression that approving any merger is politically fraught.

Mergers are surging in “astounding” numbers, the F.T.C. said last week. A “tidal wave” of filings has strained resources, and the agency is adjusting its pre-merger review process, telling companies they close at their own risk after the usual 30-day review deadline, as deals may later be deemed illegal. The agency can already retroactively challenge done deals, but the initial review framework is meant to minimize this insecurity, the Republican F.T.C. commissioner Christine Wilson wrote this week. She said that the F.T.C.’s altered process may be driven as much by politics as the rise in merger activity.

“The F.T.C. is a law enforcement agency, not a rubber stamp,” Lindsay Kryzak, the commission’s public affairs director, told DealBook via email. “Market participants should know that there are consequences to proposing potentially illegal deals.”

“My concern is that this is the government making threats,” said Noah Joshua Phillips, the other of the F.T.C.’s two Republican commissioners. He has doubts that antitrust policy can deliver the kind of social change the Biden administration seeks, suggesting that forces like globalization and international trade, rather than corporate consolidation, are what drive the economy and labor market.

Adidas sold Reebok to Authentic Brands, the acquisitive parent of Brooks Brothers and others, for $2.5 billion. The German sportswear giant paid nearly twice that to buy Reebok 16 years ago. (NYT)

Nubank, a Brazilian fintech firm backed by Berkshire Hathaway, is planning a $2 billion I.P.O. on the Nasdaq. (Bloomberg)

Aspiration, a green-minded finance start-up that counts Leonardo DiCaprio and Robert Downey Jr. as investors, is in talks to go public via SPAC. (Bloomberg)

Britain’s antitrust regulator raised concerns about Facebook’s acquisition of the image search engine Giphy, which if upheld could unwind the deal. (CNBC)

Bill Gates has pledged $1.5 billion in matching funds for climate change projects in the infrastructure bill — if it passes. (WSJ)

Dozens of members of federal boards at institutions like the National Holocaust Museum and the Kennedy Center helped spread misinformation about the 2020 election. (Insider)

The hackers who stole crypto tokens worth $600 million from a decentralized network have returned nearly all of them. (Coin Telegraph)

The French soccer club Paris Saint-Germain included some cryptocurrency in the sign-on package paid to Lionel Messi, who is joining from Barcelona. (ESPN)

Britney Spears’s father will step down as her conservator, a turnaround from his initial objections, vowing an “orderly transition” to a new appointee. (NYT)

A new chapter for newsletters at The Times. (NYT)

Pent-up demand for weddings is creating an economic jolt. (NYT)

“What We Think We Know About Metabolism May Be Wrong” (NYT)