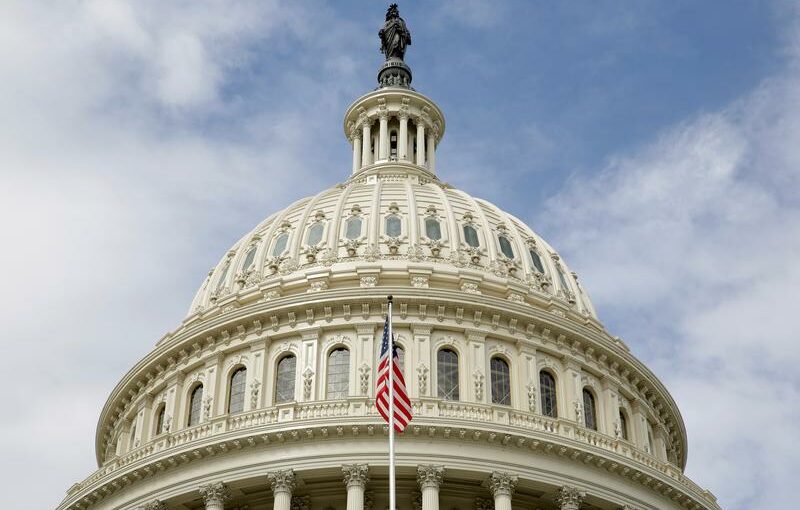 FILE PHOTO: The U.S. flag flies in front of the Capitol Dome at the U.S. Capitol in Washington, U.S., September 12, 2017. REUTERS/Joshua Roberts/File Photo

WASHINGTON (Reuters) – Nine moderate Democrats in the U.S. House of Representatives on Friday plan to tell House Speaker Nancy Pelosi they will not vote to move ahead with the party’s $3.5 trillion budget plan until the bipartisan $1 trillion infrastructure plan is signed into law, according to the New York Times.

Their refusal to back a budget resolution aimed at allowing passage of the massive spending plan is expected to be delivered to Pelosi in a letter later on Friday, the Times said, and their bloc is sizable enough to block consideration of the bill.

The move is the latest crack between moderate and liberal Democrats, who control Congress and the White House, as they seek to implement President Joe Biden’s Build Back Better agenda with an eye toward the 2022 midterm congressional election.

The U.S. Senate, which Democrats narrowly control, moved ahead to approve the massive budget blueprint earlier this week but within hours saw pushback from two moderates over the proposal’s $3.5 trillion price tag.

On Friday, the moderate House Democrats planned to urge against delaying the infrastructure bill – the nation’s biggest investment in decades in roads, bridges, airports and waterways.

“With the livelihoods of hardworking American families at stake, we simply can’t afford months of unnecessary delays and risk squandering this one-in-a-century, bipartisan infrastructure package,” the letter said, according to a copy obtained by the Times.

“It’s time to get shovels in the ground and people to work,” they wrote. The letter’s lead author, New Jersey Democrat Josh Gottheimer, could not be immediately reached to confirm the report.

Nineteen Republican senators voted for the infrastructure bill but conservatives have balked at Democrats’ larger spending plan, which includes a host of healthcare, climate, childcare and other provisions under Biden’s plan aimed at rebuilding the nation.