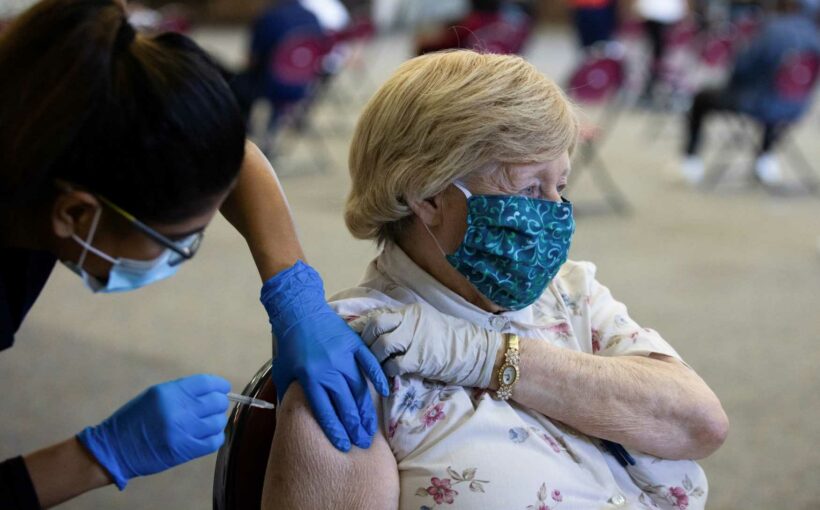 The CDC's independent panel of vaccine scientists unanimously endorsed Pfizer and Moderna's boosters for all adults, one of the final regulatory steps before the U.S. can officially start distributing the doses.

The Advisory Committee on Immunization Practices voted to recommend the shots. The Food and Drug Administration authorized both company's vaccine boosters for everyone 18 and over earlier on Friday, and CDC Director Rochelle Walensky is expected to clear the doses soon after.

The panel's recommendation would open up eligibility to everyone 18 and over in the U.S., but the group more strongly endorsed shots for older Americans by saying everyone 50 and over should get a booster. It previously said people over 65 and some other high-risk people should get a third shot.

Once Walensky signs off, tens of millions of Americans who've received their two initial shots at least six months ago will be eligible to get a third shot as soon as early as this weekend.

"As a clinician deep in the clinical trenches, I am really glad that we have clarity and streamlining of the recommendation so that all Americans can understand the vaccines that are recommended for them at this time," committee member Dr. Camille Kotton said after the vote.

Pfizer said its booster dose was 95% effective at preventing symptomatic infection in people who had no evidence of prior infection in a clinical trial of 10,000 participants 16 years and older, according to Dr. John Perez, vice president of the company's vaccine clinical research program. Moderna didn't submit its efficacy data for its booster, telling the panel it was still gathering the data.

While more than 195 million people are fully vaccinated in the US., Covid cases are rising in some areas as the effectiveness of the vaccines falls over time, the CDC's Dr. Sara Oliver told the panel.

"Overall protection remains high for severe disease and hospitalization and waning (effectiveness) appears to be less pronounced for the Moderna vaccine compared to Pfizer," Oliver said. However, she said evidence suggests there is a higher risk for a rare heart condition called myocarditis following Moderna's shots compared with Pfizer.

Dr. Nirav Shah, director of Maine's CDC and president of the Association of State and Territorial Health Officials, said the current guidelines are confusing and generate more work for state and local health officials who have to determine who's eligible or not. The group wants the CDC to distribute the shots to everyone 18 and older to streamline the eligibility process, he said.

"Such a move has the benefit of easing pressure on state health department immunization program staff, who are now fielding a high volume of booster eligibility questions," he told the panel.

Side effects from both Pfizer and Moderna's third shots were mild in the overwhelming majority of study participants, including pain at the injection site, headaches, fever and chills, according to the data.

Moderna found the side effects from its booster doses were comparable to those experienced by patients after the initial two-dose series, including headaches, fatigue and muscle aches and pains.

However, the company is still gathering safety data as its clinical trial of more than 15,000 participants is ongoing, according to Rituparna Das, who presented on behalf of Moderna during the meeting.

The Centers for Disease Control and Prevention, in a study presented Friday, found 54 preliminary cases of myocarditis and myopericarditis among nearly 26 million Pfizer and Moderna booster doses, or about 2.1 cases per 1 million shots administered. However, only 12 of those reported cases were attributed to the vaccines so far while 38 are under review and four were ruled out.

The CDC also found that people reported fewer side effects of any kind from Pfizer and Moderna boosters than from the primary two-dose series.

Biden's vaccine mandate will likely go to the Supreme Court. Here's how the courts have ruled before

The CDC advisory panel originally declined in September to endorse Pfizer's boosters for the broader public, supporting instead a scaled back distribution plan for elderly Americans and people who face a high risk from Covid infection due to underlying health conditions.

At that time, experts on the panel said available safety data, based on research from 306 individuals who received boosters, was too limited to make a determination about the risks posed by rare side effects such as myocarditis.

The panel endorsed Moderna's boosters for elderly Americans and people with underlying health conditions in October as well as Johnson & Johnson boosters for everyone age 18 and over.

Broadly administering booster doses is a controversial topic in public health. The World Health Organization has repeatedly criticized wealthy nations for rolling out third shots at a time when people in poorer nations have very limited access to vaccines.

Booster doses have also been somewhat contentious in the U.S., with some experts questioning whether now is the time to start rolling out third shots when more than 60 million Americans still haven't received their first dose.

However, state officials from California to Maine had already started rolling out boosters for all adults before the CDC's recommendation on Friday.

Many vaccinated Americans want an extra layer of protection as data increasingly shows that vaccine effectiveness against infection declines overtime. Public health experts expect an increase in infection as Americans head indoors to escape the winter cold and gather with families over the holidays.

Booster doses could help reduce transmission by helping to prevent breakthrough infections in people who are already vaccinated.