Home » World News » I entered Belarus on a tourist visa and after a 1,000 mile trip the end is in sight: Britain 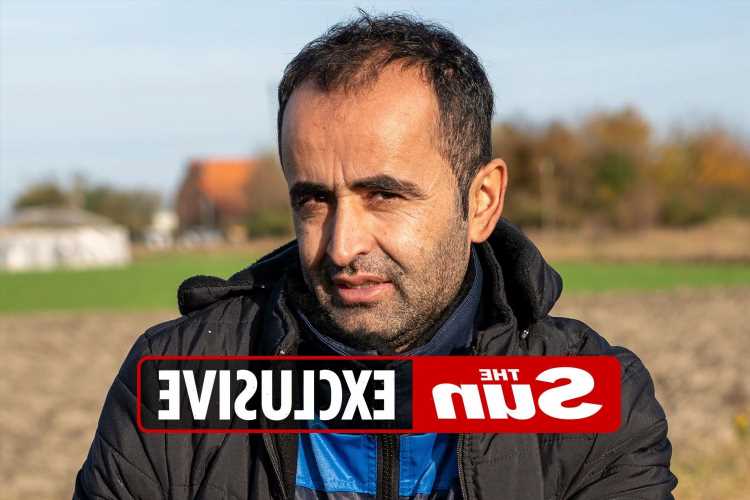 ‘WEAPONISED’ by Europe’s last dictator on the migrant trail from Belarus, Sandar Ahmed has finally reached the shores of the English Channel.

An unwitting pawn in a deadly game of geopolitics, the Iraqi was lured to the Eastern European nation on a tourist visa before being pushed across the EU’s border as part of a sinister “hybrid war”. 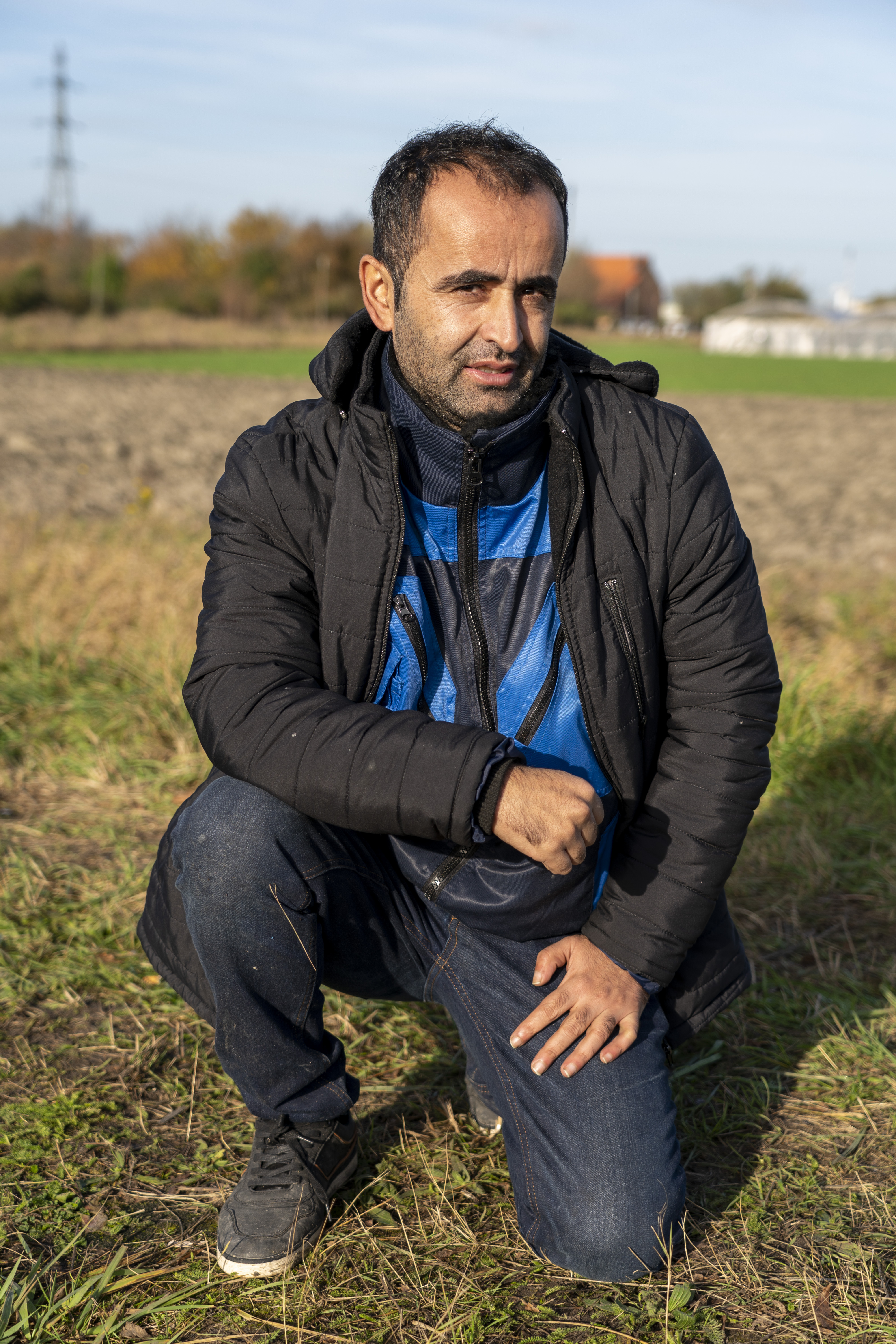 Now hoping to stow away on a lorry to Britain, Sandar, 32, told me: “Belarusian soldiers guided us across the border into Poland — but they were using us as political weapons.”

A pitiful human chess piece played by despot Alexander Lukashenko, Sandar fled violence in Iraq where, despite being a business graduate, he was unable to find a job.

Speaking after the sprawling ­Grande-Synthe migrant camp where he was living was raided by French cops, he revealed: “I arrived in ­Belarus legally on a tourist visa.

“Myself and other migrants were then taken to the border by minibus and shown where to wade across the Bug river into Poland.

“We were helped by Belarusian police and military. They stole money and mobile phones from some ­people.”

It’s a fresh headache for Home ­Secretary Priti Patel, who just this week admitted Britain was in the grip of a “mass migration crisis” fuelled by the EU.

Increasingly frustrated, she added: “Let’s not forget the real problem is the EU has no border protection whatsoever.”

Indeed, Sandar was far from the only migrant on the French coast who arrived via Belarus, a 1000-mile trip that takes in Poland and ­Germany.

‘No food or water’

Through a wheezy cough, the father, who arrived here a month ago, said: “Belarus was very, very bad. There was no food or water.

“The Polish border guards told me, ‘Go back to [Belarus capital] Minsk.’ In the night, I cut the fence and ran through.”

Now Ahmad, 36, who wants to join his two sisters living in Glasgow, revealed: “I’ve spent the past seven years in Lebanon after escaping the war in Syria. My family is still there.

“I had four children, but the little one died. I just want them to be able to go to school.”

Ahmad had flown from Lebanon to Minsk after Lukashenko’s regime doled out tourist visas to people from across the Middle East.

Quoted £3,700 for a place on a ­rickety dinghy to Britain’s shores, he ran out of money after spending almost £7,500 to reach Calais.

This week Ahmad was a bystander in some of the most chaotic scenes I’ve witnessed in two decades reporting from the French coastline.

Despite a £54million payment to France of British ­taxpayers’ cash and ever-tougher megaphone diplomacy from the Home Secretary, the well-oiled smuggling networks were in full flow.

On Tuesday, French police orchestrated a dawn raid at the squalid “New Jungle” camp at Grande-Synthe on the outskirts of Dunkirk.

It was home to around 1,500 migrants and infested with gun-toting ­smugglers.

France’s get-tough look was somewhat ruined by events unfolding 45 miles down the coast.

At first light, dozens of migrants shouldering a giant black inflatable charged from sand dunes on to the beach near Wimereux straight towards a waiting ITV News camera crew.

Leaving French soil for the final time, one gleeful-looking migrant revealed he had been “seven years in France — five years in prison”.

Then ITV reporter Dan Rivers calmly did a piece to camera as the dinghy bobbed in the waves without a police officer in sight.

Later, The Sun obtained footage of three exhausted migrants haphazardly rowing across the Channel by kayak that same morning. It is unclear if they made it to Britain.

Decathlon sports stores around Calais — including one in Grande-Synthe — have banned the sale of the small boats over fears that they would end up being used to cross to Britain.

In the past three weeks, at least ten men have died trying to cross the Channel, including two in kayaks, according to The Times newspaper.

On Monday, a 1990s Kawasaki jet ski — believed to have been piloted by migrants — even made it into ­British waters.

Amid the chaos, more than 24,000 migrants have arrived by small boat this year — almost triple last year’s 8,420 tally.

Last week, 1,185 crossed the Channel in a single day – but it emerged on Wednesday that just five migrants had been returned to Europe this year.

It ratchets up the pressure on Ms Patel — spoken of by some as a potential Tory leader — who this week allowed herself to become a hostage to fortune by vowing to stop “100 per cent” of the dinghy crossings.

Close to the old Jungle site near Calais I met a group of middle-class Iranians discussing the Home ­Secretary’s migration policy on a roadside verge.

The well-heeled party, including a financial analyst, a confectioner and a medical equipment salesman, say they are Christian converts escaping ­persecution.

Some used Grants whisky and coke in paper cups to toast having fled ­stifling life in the land of the ­ayatollahs via Greece.

Almost 30 per cent of migrants who cross the Channel come from Iran — more than any other nationality.

‘We want to work’

“My advice to Priti Patel is don’t pay the French to stop us, but instead charge us for visas to come to your country. We want to work.”

Further up the coast, migrants have lived at the crumbling industrial complex in Grande-Synthe for the past six months.

On Tuesday ­dozens were loaded on to coaches and taken to shelters in other locations. Cops detained 13 suspected people smugglers during the raid.

Left behind was a wasteland of piled rubbish, abandoned tents and smoldering fires.

Evictions of migrant camps in Calais and Dunkirk have taken place regularly since the destruction of the original Jungle near Calais in 2016.

Many migrants at Grande-Synthe slipped through the police cordon and melted away into ­surrounding scrubland.

Still dripping wet from their failed attempt at crossing the Channel, Iraqi Kurds Rawand, 27, and Awez, 24, strode back to the remnants of the camp they once called home still wearing fluorescent life jackets.

Shivering in spasms, Rawand told me: “We were at sea for five hours and were 2km from English waters when our engine broke. We had to be rescued by the French coastguard.”

They were eventually allowed through the cordon by cops to pick through the piled up detritus for their possessions.

A day later, migrants were again pitching tents in marshy fields and thick woodland around the rubbish-strewn New Jungle site.

Among them was Iraqi Kurd Harem, 21, another who had taken the Belarus migrant trail after ­flying via Dubai to Minsk.

Gesturing at the wrecked tents, discarded clothes and rotting baguettes, he said: “We lived here like monkeys.”

An accountancy ­student who left Iraq because he was “unable to get a proper job”, Harem told how corrupt Polish border guards stole 1,050 euros from him in return for letting him into the country.

Now he has no money for his passage to Britain, saying: “I don’t know how I’ll get there.”

The Rzgar family, led by mum Kazhal, re-pitched their tent in the field next to the wrecked New ­Jungle.

‘Our mum is scared’

Hoping to join family in Birmingham, the 46-year-old and her four children — from Darbandikhan, in Iraqi Kurdistan — journeyed by boat from Turkey to Italy before arriving at the camp earlier this month.

Youngest daughter Hasty, seven, seemingly oblivious to the squalor around her, laughed as she hitched a ride on a supermarket trolley piled with their blankets.

Older daughter, art student Hadya, 22, said: “In Iraq, we have no money. We just want a good life.”

On Thursday, French cops again raided the remnants of the camp. Bedraggled migrant families — their ­blankets, tents and other meagre belongings stuffed into trollies — weaved in and out of traffic on the busy D601.

Tyrant Lukashenko, who claimed victory in the rigged 2020 presidential election, unleashed the migrant chaos in retaliation for rounds of EU sanctions.

Last week, some 4,000 people searching for a better life were coaxed by the strongman’s goons from Minsk to Poland’s ­fortified border.

They were met by 15,000 Polish soldiers and border guards — trapping families in a freezing and hellish limbo.

Sending me videos of the ­miserable scenes this week, Iraqi Mahamad Sexo, 35, said: “We are stuck here, there are many children with us.”

Later, Belarus eased ­tensions — at least for now — by providing shelter in a giant ­warehouse for around a thousand of those trapped at the border.

Back in Grande-Synthe, Sandar is looking for a place to bed down for the night as the temperature plummets.

The dejected Iraqi said: “My advice to other migrants is never travel through Belarus. It’s the wrong route to reach your dream.” 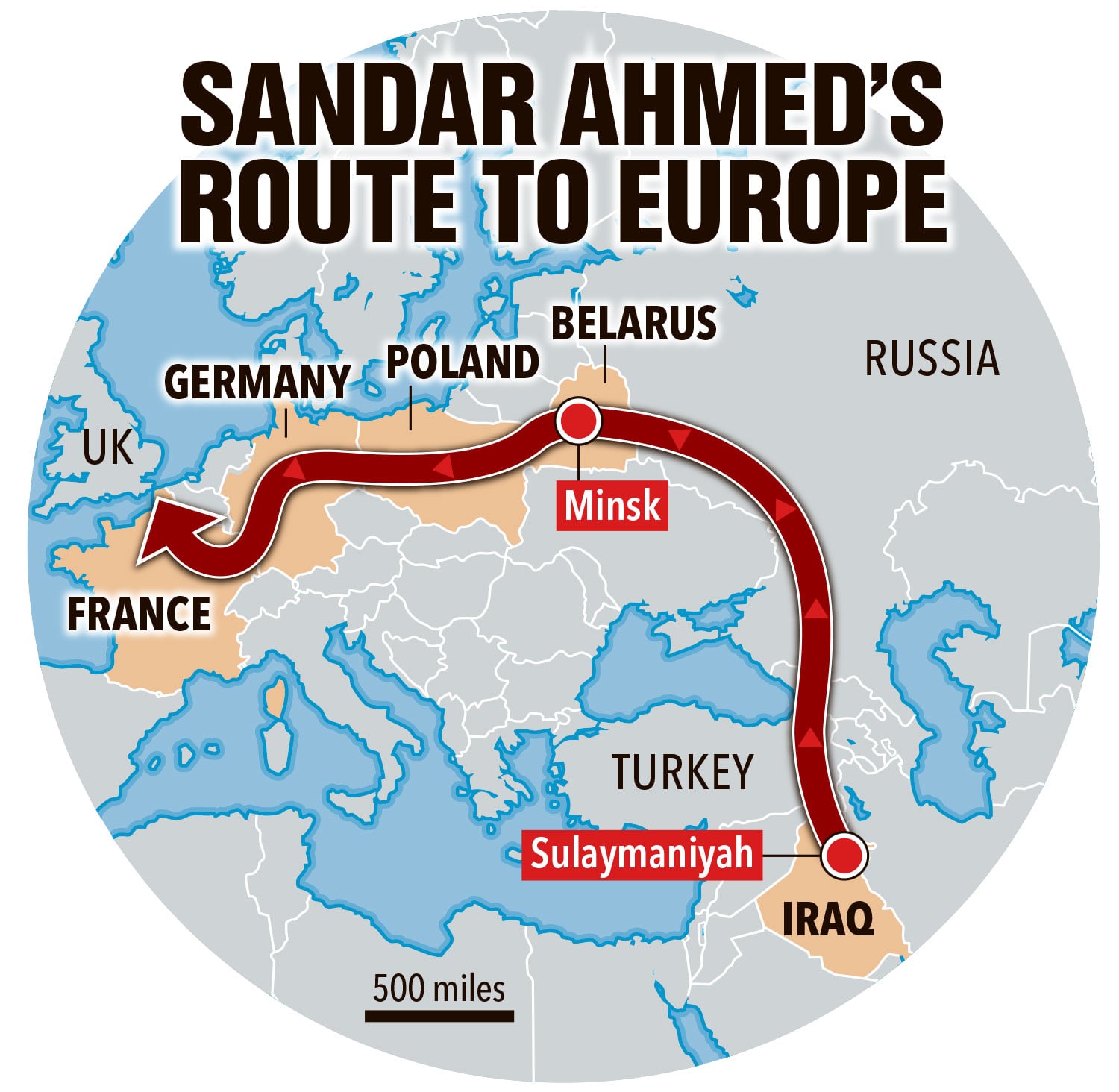 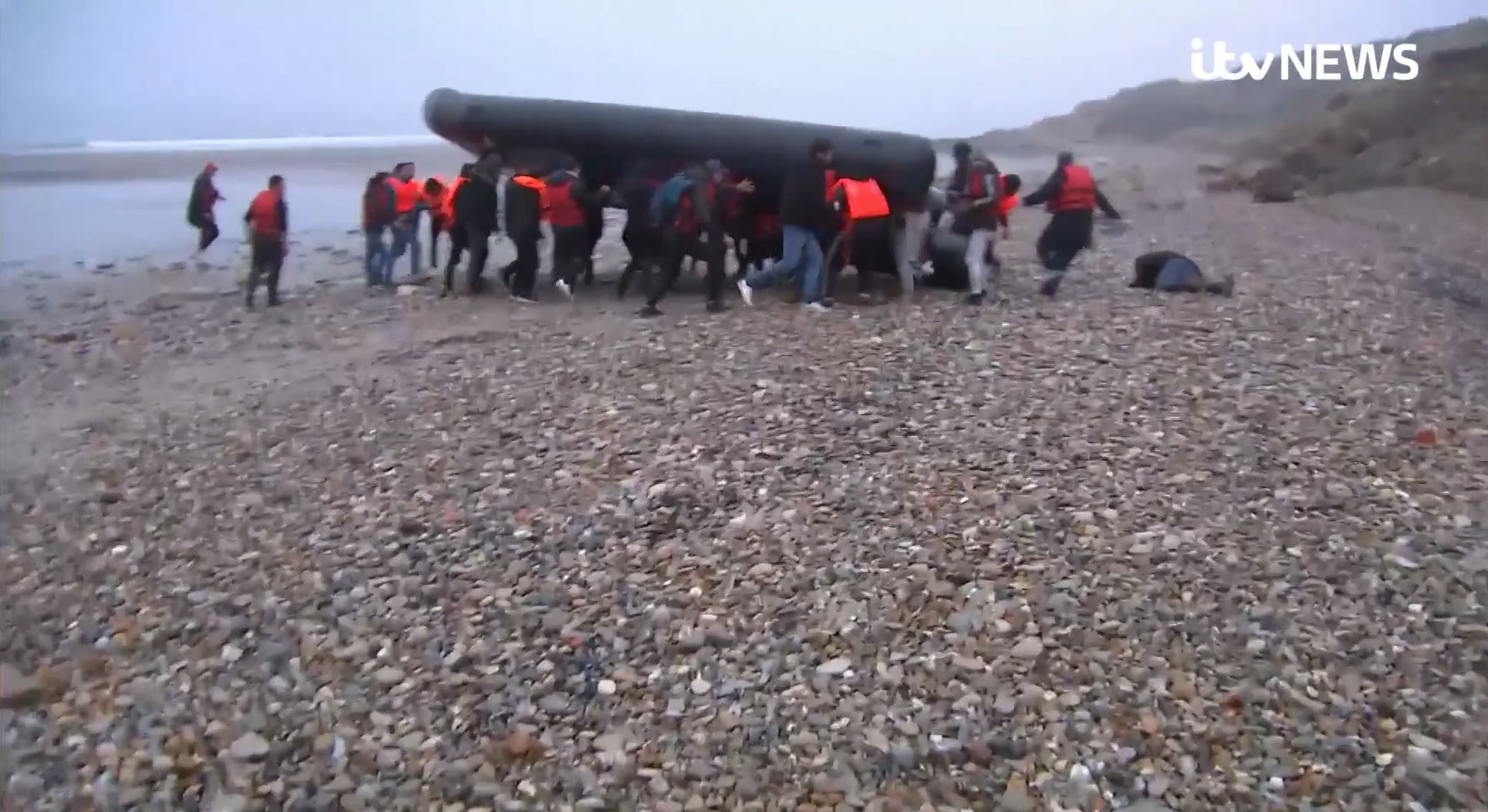 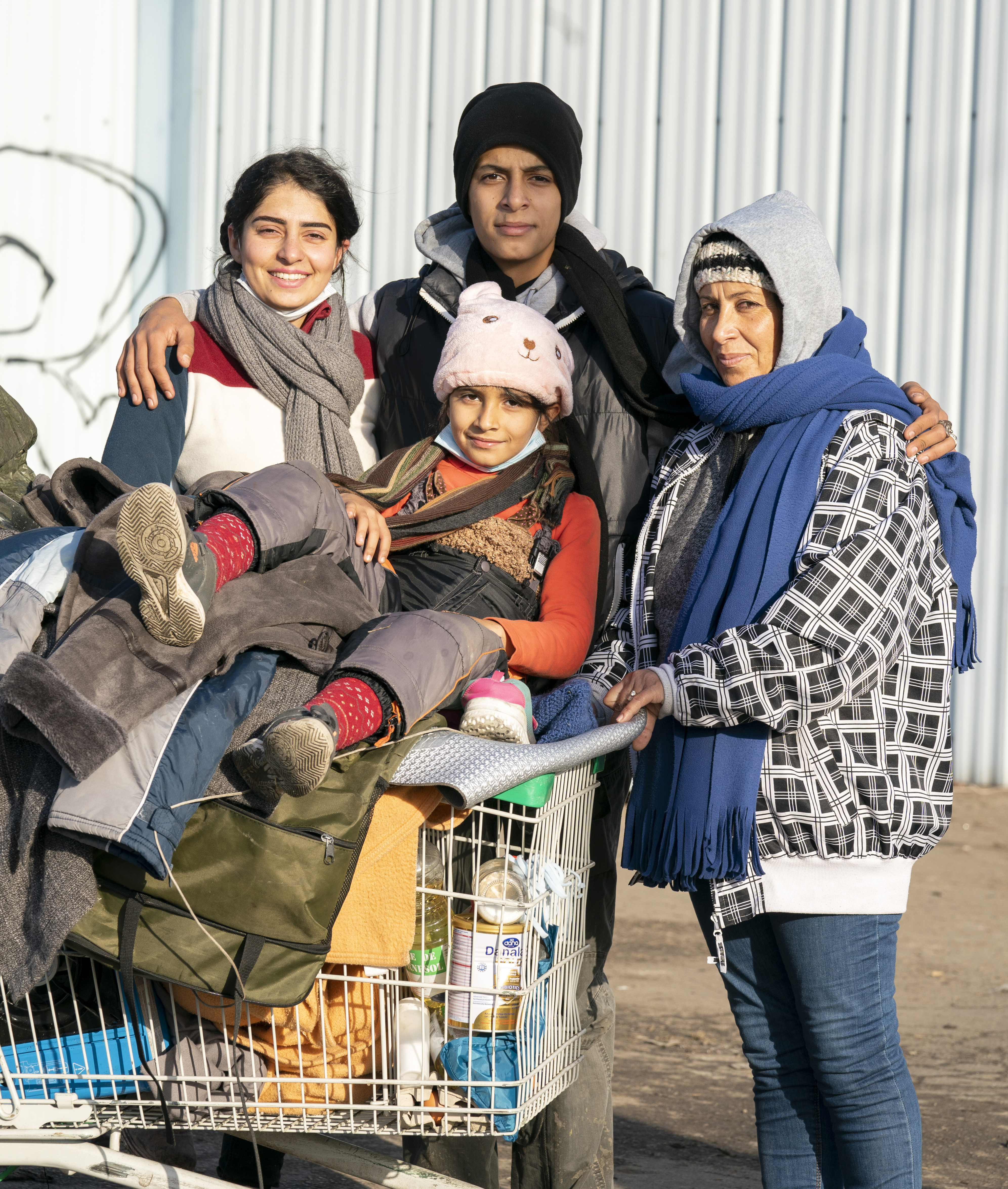 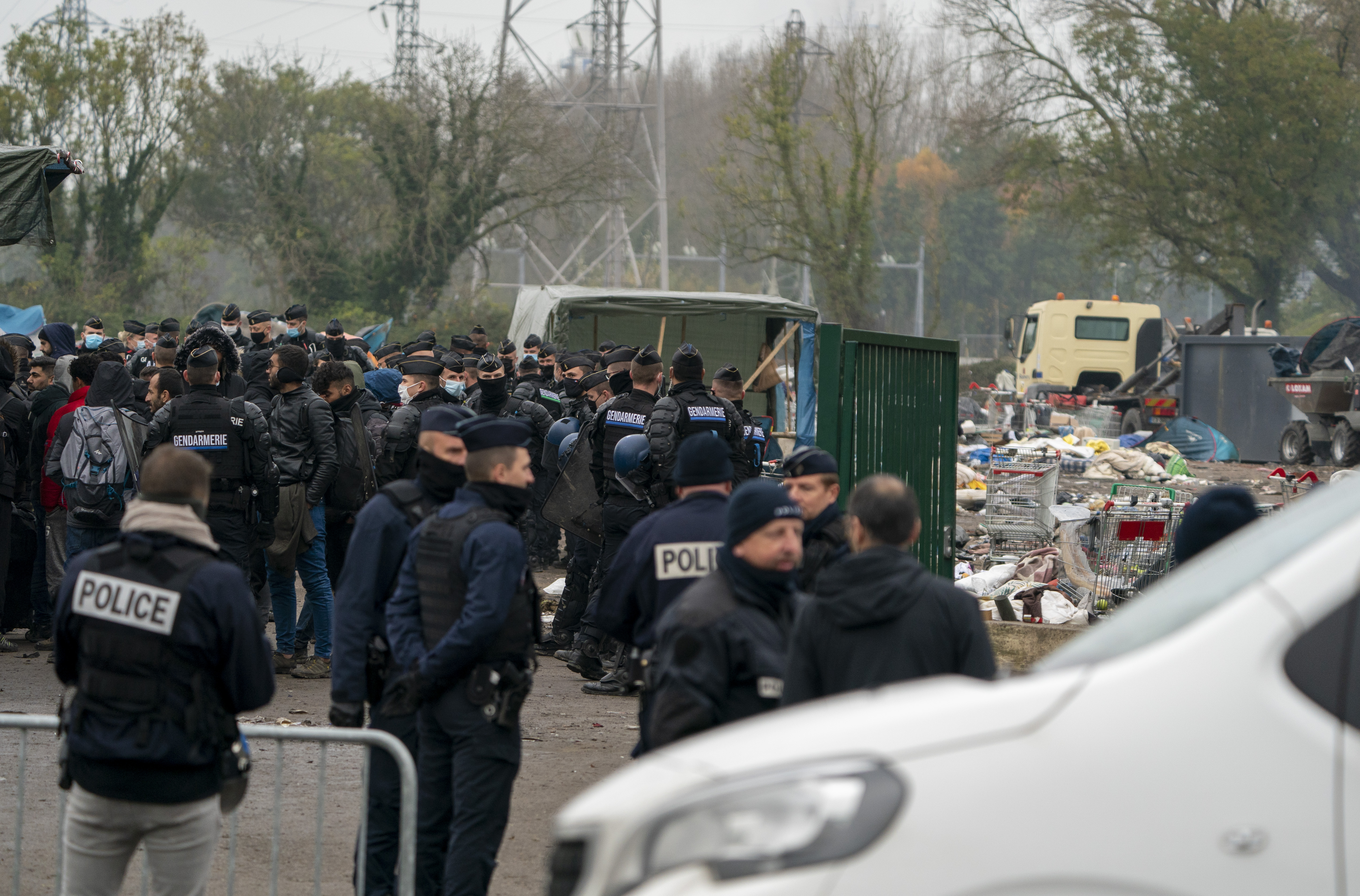