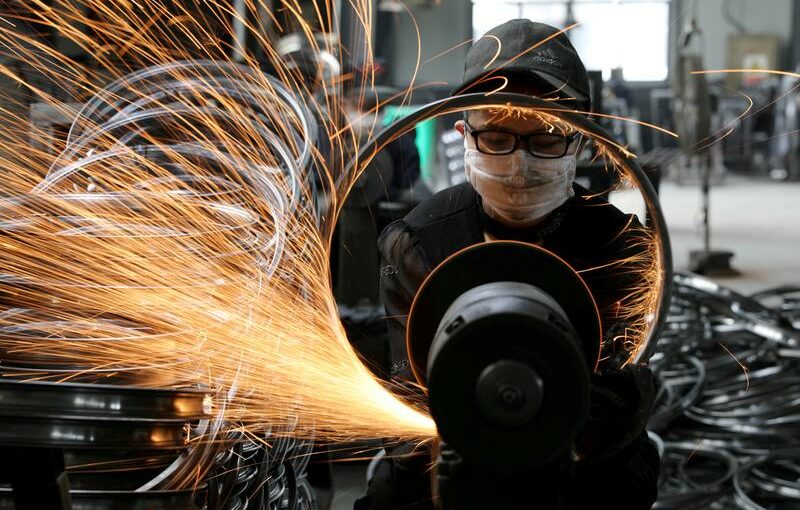 BEIJING (Reuters) – China’s factory activity snapped three months of decline in June, as authorities lifted a strict lockdown in Shanghai, buoying growth in production and new orders, while the rebound in services sector pressed on.

The official manufacturing purchasing managers’ index (PMI) rose to 50.2 in June from 49.6 in May, the National Bureau of Statistics (NBS) said on Thursday.

A Reuters poll expected the PMI to come in at 50.5, above the 50-point mark that separates contraction from growth on a monthly basis.

Though activity in China is gaining momentum from lengthy COVID lockdowns in April and May, headwinds, including a still subdued property market, soft consumer spending and fear of any recurring waves of infections, persist.

Shanghai, located at the heart of the Yangtze River Delta manufacturing area, ended a city-wide lockdown on June 1, allowing small factories in the region to resume production. However, social distancing rules such as those on in-restaurant dining were still in place throughout June.

A sub-index for production stood at 52.8, the highest since March 2021, while new orders also returned to expansionary territory for the first time in four months, although growth remained weak.

“Even though the manufacturing sector continued to recover this month, 49.3% of the companies reported orders were insufficient,” said Zhu Hong, senior statistician at NBS. “Soft market demand is still the main problem facing the manufacturing industry.”

The official non-manufacturing PMI in June improved to 54.7 from 47.8 in May. The services industry staged an impressive rebound, the fastest in 13 months, with sectors that were hard hit by COVID curbs catching up with previously depressed demand.

In order to stabilise growth and rein in unemployment, China’s State Council recently announced a broad package of economic support measures. President Xi Jinping is set to secure his third term in the 20th Party Congress this fall.

Analysts say the official GDP target of around 5.5% for this year will be hard to achieve without abandoning the zero-COVID strategy.

Premier Li Keqiang vowed to achieve reasonable economic growth in the second quarter, although some private sector economists expect the economy to shrink in the April-June quarter from a year earlier, compared with the first quarter’s 4.8% growth.

China’s official composite PMI, which includes both manufacturing and services activity, stood at 54.1, compared with 48.4 in May.