Home » Politics » 'I Keep Waiting for the Feds to Come': The Jan. 6 Investigations Have Trumpworld on Edge 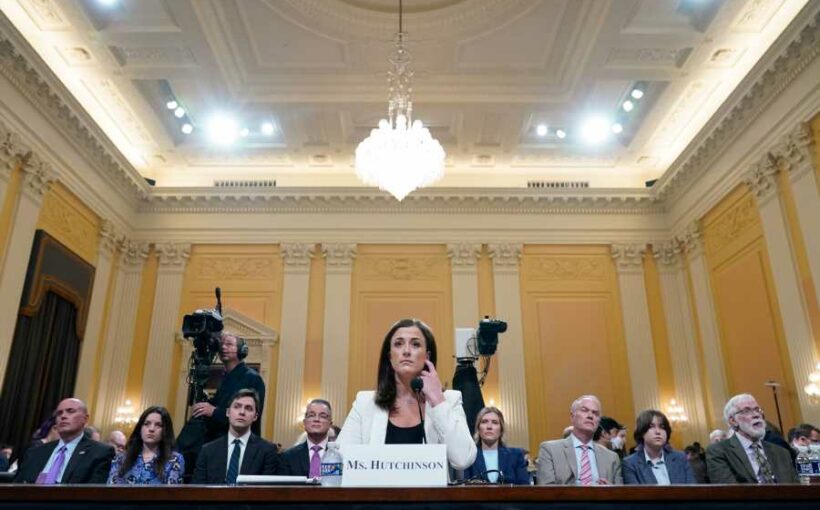 After a jaw-dropping Jan. 6 committee hearing and a string of aggressive moves by the Biden Justice Department, Donald Trump’s associates are realizing what the ex-president can’t admit: The dual investigations into the efforts to overturn the 2020 election are far more than show trials — and there may be serious legal consequences for the people involved.

“I keep waiting for the feds to come raid my shit,” says a current close adviser to former President Trump, who was also intimately involved in the effort to overturn the 2020 election results. This person spoke on the condition of anonymity to candidly address their ongoing anxieties. “I’m not sure how high on the food chain the Department of Justice considers me, but it wouldn’t be the most out-of-the-blue thing if I…got subpoenaed or served a search warrant.”

Every Super Bowl Halftime Show, Ranked From Worst to Best

Another former Trump adviser tells Rolling Stone that, in recent days, they consulted with their lawyer about possible “worst-case scenarios” that could come from the DOJ investigation and the House select committee on Jan. 6.

Tuesday’s hearing of the Jan. 6 committee turbocharged Trumpworld’s anxieties, as former White House aide Cassidy Hutchinson testified about a string of damaging — and potentially criminal — activities Trump and his team engaged in in the run up to the Capitol attack.

“In the time since Cassidy testified, there has definitely been an uptick in chatter in [Trumpworld] about who is and who isn’t criminally exposed,” said a former senior Trump aide. “There are some people who don’t take these hearings or the DOJ probe seriously, and think of it as ‘Mueller Part 2’ or yet another example of the media getting over its skis. There are others who think that, whatever you think of the committee, criminal charges could easily come after all these testimonies and subpoenas. I count myself among the latter group, and Tuesday made me feel even more confident in the idea that we should all be preparing for the Biden Justice Department to really go after Trump people. This isn’t a joke, and should not be treated like one.”

Hutchinson, a former aide to chief of staff Mark Meadows, laid waste to the Trump team’s effort to shield themselves from any culpability in the Capitol Attack. Trump’s associates have sought to portray the attack as unforeseeable and totally disconnected from any official activities, claiming Trump disapproved of the violence and sought to quell it. Over the span of three hours, Hutchinson revealed that entire narrative to be a lie.

Hutchinson testified that Meadows had been aware of the possibility for violence in the days before the riot, telling her things could get “real, real bad on Jan. 6.”

But Hutchinson’s most damning revelations were about Trump himself. The former president, she testified under oath, demanded that the Secret Service remove magnetometers even after being informed that agents had found weapons among the crowd, allegedly saying, “They’re not here to hurt me. Take the f-ing mags away. Let my people in. They can march to the Capitol from here.” Hutchinson also said she’d been in conversations that revealed Trump had not only approved of the riot, he’d demanded to be taken to it and grappled with his Secret Service detail when they refused.

The testimony stunned even Trump’s own former White House chief of staff, Mick Mulvaney, who declared it “explosive” and added, “I know [Hutchinson]. I don’t think she is lying.” Former prosecutors in the U.S. attorney’s office in Washington, D.C., which is currently leading a criminal investigation into the insurrection, told the Wall Street Journal that the evidence provided during the hearing could pave the way for criminal charges against Trump.

Early Wednesday evening, the Jan. 6 committee served a subpoena to Pat Cipollone, Trump’s former White House legal counsel who, per Hutchinson’s testimony, had said the former president’s staff would be “charged with every crime imaginable” if they went to the Capitol.

The Jan. 6 committee does not have the power to charge officials with crimes, but the Justice Department does, and MAGAland officials are watching the DOJ anxiously. The investigative team is pulling in prosecutors with lengthy résumés in counterrorism and national security, Rolling Stone has learned. And for weeks, whispers of the inclusion of these nat-sec prosecutors have ricocheted around Trump’s professional circles, including in the halls of Donald Trump’s Florida and New Jersey clubs, three people familiar with the matter say.

“Why are they sending counterterrorism [professionals] after us?” asked the close Trump adviser connected to his 2020 and 2021 efforts. “Does that mean [the Biden DOJ thinks] we’re terrorists?”

According to three sources with knowledge of the situation, the DOJ team has seasoned nat-sec veterans leading the charge, such as C. Alexandria Bogle of DOJ’s National Security Division. Thomas Windom, who The New York Times describes as the “little-known federal prosecutor” presiding over integral parts of the Justice Department’s investigation, also has experience in prosecuting domestic-terror-related cases.

The DOJ did not respond to Rolling Stone’s inquiries seeking comment for this story.

In the mid-2010s, Bogle prosecuted a number of immigration cases before moving onto more high-profile terrorism cases, including an investigation of the 2015 ISIS-inspired mass shooting in San Bernardino. She helped secure a guilty plea from the mother of the shooter for destroying evidence in the wake of the attack and along with four others received a 2017 attorney general’s award for her work.

While a number of former Trump aides are watching DOJ and mulling the possibility of being caught up in a criminal investigation, a handful have already found themselves in the crosshairs. Federal agents searched the home of Jeffrey Clark, assistant attorney general in the Justice Department’s environmental and natural resources division who had sought to help Trump overturn the election. The Justice Department is reportedly investigating Clark for conspiracy to obstruct the certification of electoral college votes, according to The New York Times, rattling nerves among MAGA aides in exile.

Fox News has only stoked the paranoia with unhinged calls by the likes of Tucker Carlson, who gave viewers a “reminder” that “anyone who didn’t vote for Joe Biden” should “erase your texts and emails every single day” during a segment on the investigations. “Increasingly I don’t recognize the country anymore with these kinds of Stasi-like things happening,” Clark moaned in an appearance on Tucker’s show — after federal agents searched his home last week.

But the involvement of a prosecutors with experience in the National Security Division, or any other section of the Justice Department, shouldn’t come as a surprise given the resourcing requirements for such a large case, says David Laufman, a partner at Wiggin and Dana who previously served as the chief of the counterintelligence and export control section in the Justice Department’s National Security Division.

Matthew Olsen, the head of the department’s National Security Division, spoke to the resourcing challenges posed by the insurrection during testimony in January. “Obviously, January 6th is a singular event that has stretch[ed] the resources of our office and the US Attorney’s Office in D.C. which is handling that case,” he told a Senate panel.

Contrary to some Republicans and Trump confidants’ beliefs, prosecutors from the Justice Department’s National Security Division are governed by the same rules and guidelines codified in the Justice Manual used by their colleagues, Laufman added. “That applies to prosecutors across the entire department, whether they’re at Main Justice, the litigating division, the criminal division, the NSD, or the antitrust division, or in a U.S. Attorney’s office,” Laufman says. “The policy remains the same, the same considerations with respect to whether to charge a case, the factors governing the exercise of prosecutorial discretion — those are uniform in their application across the department.”

On the same day federal agents searched Clark’s home, law enforcement handed out subpoenas and search warrants across the country as part of a criminal investigation into Trump campaign’s effort to overturn the election with slates of fake electors in battleground states, The Washington Post reported. Federal agents visited the home of bogus Georgia elector Brad Carver and issued a subpoena to Trump campaign official Thomas Lane, who reportedly helped to organize Arizona’s slate of fake electors. FBI agents also served Trump campaign attorney John Eastman, who advised the Trump campaign that Vice President Pence could accept the impersonators as legitimate, with a search warrant that day as well.