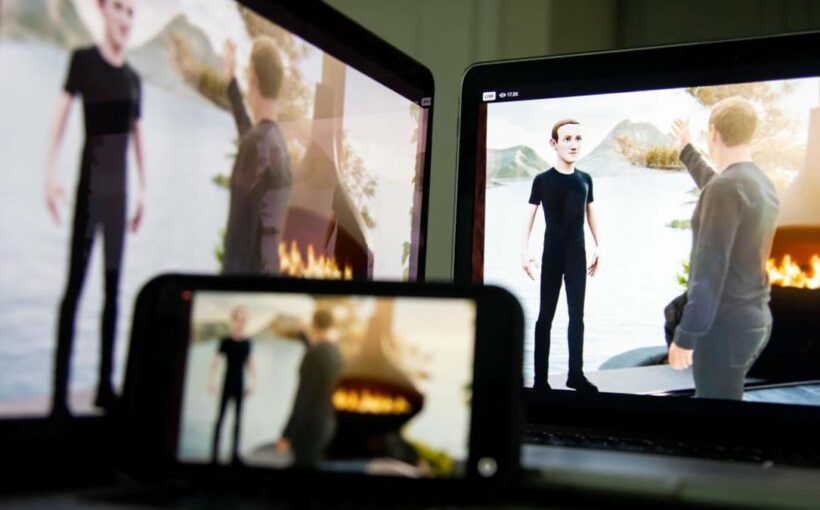 Last week, while most of the world was marvelling at the dumpster fire of Facebook’s various PR scandals, Mark Zuckerberg tapped us on the shoulder and said: “Hey, wouldn’t you rather come and look at the giant bonfire I’m building here?”

The announcement that the Facebook holding company would be changing its name to Meta was a classic example of corporate bait and switch, but it was also a long time coming.

Among the various damning revelations to come out of the recent Facebook leak, there was also data showing the company is losing its grip on younger customers.

As Verge journalist Alex Heath pointed out in a recent podcast: “The company is essentially having an existential crisis with young people.

“They now think if they can’t correct course and get young people to care about Facebook and keep engaging with Instagram, that they’ll go into this self-sustaining decay.”

Heath explained that when indexed against United Nations population demographics, Facebook’s audience is ageing disproportionately to the UN data. “The audience is becoming older and fewer and fewer young people are coming on,” he said.

In this context, the rebranding of the overarching holding company is a public concession that the cash cow Facebook app will not be the centre of its universe in the future.

Instead, the company is banking on a future version of the internet, called the metaverse.

There is something delightfully tone-deaf about the choice of that word, given that it was coined three decades ago in a dystopian novel called Snow Crash, in which people try to escape the horrors of the real world by dipping into virtual reality. So yes, we’re living in a real-life sci-fi movie and Mark Zuckerberg wants to be the overlord of an alternative reality.

These days the word “metaverse” is just tech babble for a virtual landscape where people can connect with each other via a range of interconnected apps (many of which Facebook will presumably own).

The world of video gaming has already given us our first taste of life in the metaverse. Fortnite is probably the best example we’ve seen so far, where people choose avatars, wander through a fantastical world, buy digital clothing, engage and collaborate with other people and complete various missions.

Zuckerberg anticipates that through the growing development of virtual reality and augmented reality technology, the lines between the digital and real worlds will become increasingly blurred. He’s anticipating that the future version of the internet will be ripped from the stationary screen of a television or laptop and melded into what we see with our eyes. It would be a bit like having your phone attached to your head the whole time.

The exact path towards this metaverse remains unclear, but video games again provide a glimpse of how quickly things can develop in the digital space. Only a couple of decades ago, kids were playing Super Mario Brothers, thinking it could never get any better. That was until Sega arrived and gave us a taste of Mortal Kombat. Before we knew it, we were clutching a PlayStation controller. And today, you often need to do a double-take to know whether it’s a real game of football or just a game of FIFA.

The point here is that we’re probably still running on version 1.2 of the internet. Zuckerberg and his crew of digital henchmen are preparing for version 2.0 of the net – a landscape that right now seems as far removed as mobile phone internet connectivity did when we were all addicted to playing Snake on a Nokia 3310.

Facebook is getting ready to blow US$10 billion on new ways to connect the real world with the internet. This might happen through virtual reality headsets, but we’ll also see glasses make a comeback.

A few years back, the Google Glass gadget could already translate words in the real world – on street signs and billboards – into different languages. And that was only the start of digital bleeding into the real world.

In the future, think Minority Report with algorithms instead of psychics predicting the choices you will make. With a simple swipe of the air, you could pick your playlist, activate a Zoom call and send work emails – all without relying on a phone.

The scary question we need to ask ourselves is whether we want Facebook to be at the centre of that. How badly will we get burnt when we warm our hands around the latest bonfire it has created?

This might all seem too far-fetched. But every time I think an idea is too wacky or bizarre to be real, I am reminded of David Bowie’s brilliant 1999 BBC interview in which he was asked if the impact of the internet was exaggerated.

His response: “I think the potential of what the internet is going to do to society, both good and bad, is unimaginable. I think we’re actually on the cusp of something exhilarating and terrifying … It’s an alien life form. Is there life on Mars? Yes, it’s just landed here.”

Who would have thought we would ever be so complicit in our own alien abduction and that we’d be doomed to make the same mistake again and again?