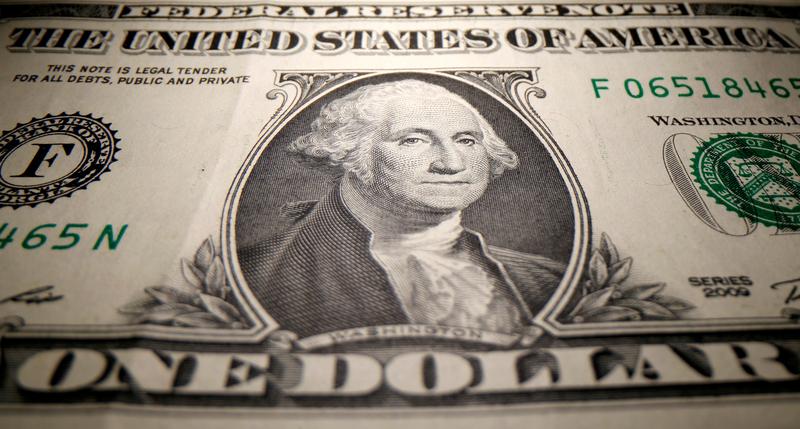 LONDON (Reuters) – The dollar rose to its highest in nearly three years versus the yen on Monday as investors remained confident the U.S. Federal Reserve will announce a tapering of its massive bond-buying next month despite softer U.S. payrolls figures.

FILE PHOTO: A U.S. dollar banknote is seen in this illustration taken May 26, 2020. REUTERS/Dado Ruvic/Illustration/File Photo

The jobs data released on Friday pushed U.S. bond yields higher, and so the yen, which is known for being particularly sensitive to yield differentials, slipped to as low as 112.84 yen per dollar in early London trading on Monday – a level last seen in December 2018.

The Japanese currency was also hurt by a slight tilt towards riskier currencies as sterling and the Australian dollar both gained slightly on the greenback, leaving the dollar’s index a touch lower at 94.137, but not far from a one-year high of 94.504 touched earlier this month.

The yen has also been weighed down by the continued crude oil rally, given Japan’s status as a net oil importer, said Joel Kruger, currency strategist at LMAX, adding that the currency is also hobbled by monetary policy divergence between the Bank of Japan and its peers, driving a widening yield differential.

“The yen has seen broad selling pressure for the 3rd straight day,” said Kruger. “This is down to a feedback loop with the Japanese stock rally, while broader sentiment has been lifted by PM Kishida’s capital gains tax comment.”

Japan’s Nikkei 225 stock market index rose for a third straight session on Monday, extending its recovery from a six-week low marked last week, as a sharp decline in the yen boosted exporters while a drop in COVID-19 infections added to economic reopening hopes.

U.S. currency and fixed income markets are closed on Monday for a holiday but benchmark 10-year Treasuries yield hit a four-month high of 1.617% on Friday, even after data showed the U.S. economy created the fewest jobs in nine months in September, significantly underperforming economists’ forecasts.

However, data for August was revised up sharply and the jobless rate dropped to an 18-month low, suggesting fears of labour shortage remain justified, keeping worries about inflation alive and giving the Federal Reserve justification to reduce its emergency stimulus begun last year.

“Although the headline payroll figure was weak, when you look into details, the outlook remains solid and there isn’t anything that would prevent the Fed from tapering next month,” said Shinichiro Kadota, senior FX strategist at Barclays.

The Chinese yuan was little moved by the ongoing travails of Chinese developer China Evergrande Group, even as offshore bondholders brace for news on more than $148 million in looming bond coupon payments after the company missed two coupon deadlines last month.

The offshore yuan was last at 6.4370 per dollar towards the top end of its recent range, but still short of its high of 6.422 hit in September.

The Australian dollar firmed a little, edging nearer to its highest in a month, helped by strong commodities prices and a partial reopening of Sydney, Australia’s largest city.

Concern about inflation is not limited to the United States, with supply disruptions and rising commodity prices affecting many other countries.

The British pound held firmer at $1.3634, extending its recovery from a nine-month low set late last month, on growing expectations that the Bank of England could raise interest rates to curb soaring inflation.

The Canadian dollar changed hands at C$1.2450 per U.S. dollar, having hit a two-month high of C$1.24465 thanks to surprisingly strong Canadian payrolls data and lofty oil prices.