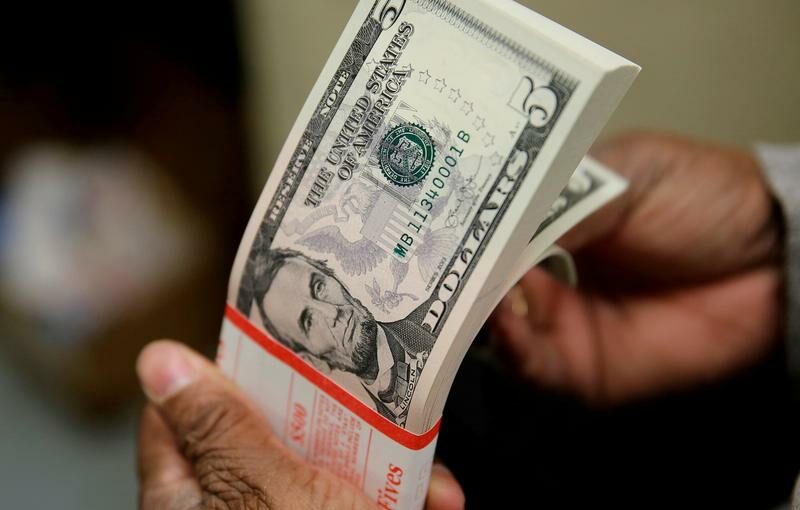 TOKYO (Reuters) – The dollar hovered below an almost 16-month high versus major peers on Monday, as traders awaited fresh clues on the U.S. economy after bringing forward last week bets for a Federal Reserve interest rate hike on the back of red-hot inflation.

FILE PHOTO: A packet of U.S. five-dollar bills is inspected at the Bureau of Engraving and Printing in Washington March 26, 2015. REUTERS/Gary Cameron

The dollar index, which measures the currency against six peers, was little changed at 95.120 from Friday, when it posted its biggest weekly gain since mid-August and touched 95.266 for the first time since July 2020.

The main event on the U.S. economic calendar this week will be Tuesday’s retail sales data, particularly after a survey on Friday showed consumer confidence unexpectedly plunged to a decade low in early November as high inflation wreaked havoc on sentiment.

“It will be important to watch what still cashed-up U.S. consumers do rather than what they say,” considering readings of sentiment were at odds with actual spending during the summer, Ray Attrill, head of FX strategy at National Australia Bank in Sydney, wrote in a client note.

The dollar has been on a tear since Wednesday, when data showed a broad-based rise in U.S. consumer prices last month at the fastest annual pace since 1990, casting doubts on the Fed’s stance that price pressure will be transitory.

Money markets were pricing a first rate increase by July and a high likelihood of another by November next year as of the end of last week.

But gains in the heavily euro-weighted dollar index have also been helped by a droop in the single currency with the European Central Bank appearing unlikely to change its extremely dovish policy settings in the near term against the backdrop of a slowing economy.

Later on Monday, ECB president Christine Lagarde will speak before the Committee on Economic and Monetary Affairs of the European Parliament.

The dollar edged up slightly to 113.965 yen, consolidating around 114 since Wednesday.

China releases activity data on Monday, and investors will also be watching any comments coming out of a virtual summit between Chinese leader Xi Jinping and U.S. President Joe Biden.