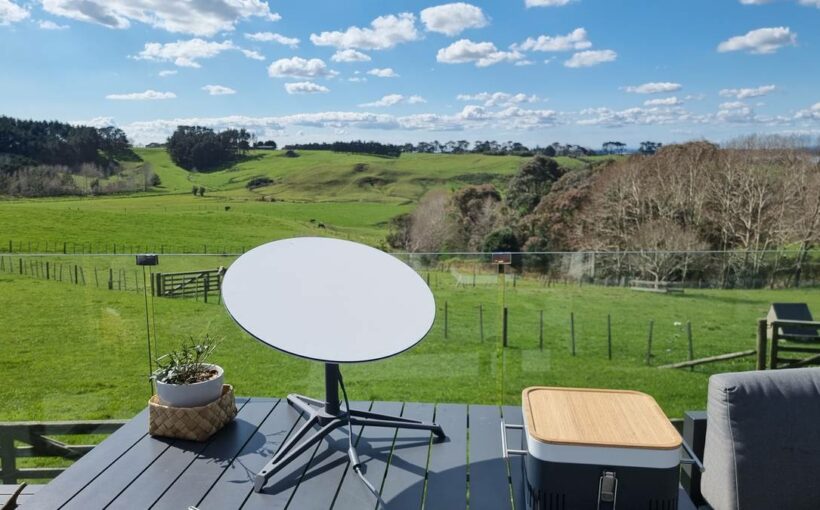 More reviews are coming in from early adopters of Starlink – the Elon Musk company that offers broadband from above via a network of low-Earth orbiting satellites, backed by six ground stations around New Zealand.

For some New Zealanders living in rural areas starved of good internet options – or in that awkward city-fringe gap where they’re too far from town for fibre but not “country” enough for the Rural Broadband Initiative – SpaceX subsidiary Starlink provides a relatively low-cost (for satellite service) option, with the unique sell-point in satellite-based service of unlimited data.

The notices are mixed.

Last month, we had a largely rave review from Hawke’s Bay game developer David Frampton. Starlink’s performance was a huge step-up from his old copper line as he uploaded and downloaded huge files for his work-from-home business.

“The setup was very easy, although cables are currently snaking through the kitchen, so I might get an electrician in to tidy it up after lockdown,” the developer said.

Both were previously struggling with copper line connections before their respective Starlink orders turned up within the past couple of weeks.

For Vermeulen, it’s been a level 4 lifesaver. He has many a bouquet for Starlink, but has had an issue with his smart-home accessories, while Richie has had an issue wrangling remote access to his property’s webcams that could be a deal-breaker (more on those problems below).

“They have thought of everything, including sealing strips so your screws won’t leak, and plenty of attractive wall clips. The mount kit even comes with a backpack you put the Dishy in and wear while you are climbing on to your roof.

“I’m a DIYer, but install really was a breeze.”

Latency, or a slight lag with two-way connections for the likes of multiplayer gaming or video chats, has been a traditional bugbear with satellite broadband, given satellites have been in geosynchronous orbits around 36,000km to match the spin of the planet and effectively be pinned to one spot above the Earth’s surface.

Starlink takes a different approach, with thousands of satellites in a low-Earth orbit. That means you risk micro-outages or variable speed as one satellite moves out of range and another takes over, but it does seen to have eliminated the latency problem.

“My son plays Fortnite and we were expecting latency issues, but haven’t experienced anything,” Vermeulen said.

“Same for Zoom calls. These were always painful for us but now perfect.”(Richie found latency in range of 47 milliseconds to 62ms – very workable, if still below Starlink’s promises. He expect it to get better as Starlink launches more satellites.)

And for brute bandwidth, Starlink has been far better. “The old [copper] upload speeds for me were the worst,” Vermeulen said.

“If I had a video file of, say, 1 gigabyte for work, for instance, I simply couldn’t share it with clients from home.

“I would have to drive 75km to our Avondale office to upload files. One of the reasons we rented office space was because of the internet speed. We could potentially work from home now quite comfortably.”

• Subsidiary of the Elon Musk-owned SpaceX
• Building a network of satellites to offer broadband from above
• Some 1600 Starlink satellites launched by Space X so far; 42,000 planned
• Via local partner Vocus, has six ground stations dotted around NZ, which connect its satellites to the internet at large
• Requires a satellite dish, called “Dishy”, which costs $799 plus $114 shipping
• Offers unlimited data (a first for the world of consumer-level satellite broadband) for $159 per month
• DIY install, with the help of a smartphone app for orientation the satellite dish
• Comes with 30m of proprietary cable and a Wi-Fi router
• Promises speeds of up to 150Mbps (enough for Netflix etc) and latency (or lag) as low as 20ms to 40ms
• 30-day return option
• Currently in beta. Starlink has not said if its signature unlimited data will persist beyond this trial phase

He added, “Our old internet was VDSL [the fastest type of copper connection], but on a good day we would see 20mbps down. it would drop out often or we could have days where we couldn’t operate above 5mbps. And we don’t have good 4G reception, so fixed-wireless wasn’t an option.”

A few days after setting up his Starlink connection, Vermeulen showed the Herald speed test results of up to 225Mbps for downloads and 28Mbps up.

Like Richie, he’s found speed variable. Sometimes it’s been a low as 50Mbps.

Vermeulen said headline take was, “All in all though can’t rate it highly enough. I’m very impressed with the build quality, ease to get up and running and obviously performance.”

But Vermeulen did have a quibble with the Jetson-esque Starlink modem, which comes with a built-in Wi-Fi router to share the satellite broadband to users and gadgets around your home.

Here, a space-age, Jetson-esque design seems to have been prioritised over features.

Vermeulen said the Starlink modem’s Wi-Fi signal was an impressive improvement on his old router but “it doesn’t have multiple ports so our Arlo [security camera] base and Philips Hue [smart lighting] base will need a splitter or something.”

His frustration wrangling his webcams has been such that, despite Starlink’s advantages in speed, he’s actually mulling a return to his old copper line.

“For most people that won’t be an issue. But you don’t need to be a hard-core nerd to want to adjust settings that are available on practically every other modem that’s ever been made.”

He elaborated, “I have several webcams. When I view them on the internet when I’m away from home, it could take anything from four to 30 seconds for the images to refresh because of the slow upload speed from my ADSL [older copper line]. Hence my desire to use Starlink with its vastly superior upload performance.”

Richie enabled a feature called port-forwarding on his old ADSL modem to control his webcams from afar.

But he found he could not do this with the Starlink modem because the company had a tech spec called CG-NAT implemented on its network along with IP4 [Internet Protocol Version 4] rather than the most recent spec now used by most internet service providers IP6.

Richie forwarded an email from Starlink tech support, which said, in part, “Unfortunately there isn’t a workaround. We are working towards IPv6 which will open up additional possibilities but do not have any specifics to give at this time.”

“This is a big turn-off for me,” Richie said.

“It looks as though to maintain accessibility to my webcams I’ll need to retain my ADSL [copper line].

“But Starlink means I don’t need to wait for 12 hours for a Microsoft OS upgrade to download, among many other things. Difficult or costly decisions.”

The Herald has fielded quite a few questions from readers about whether Starlink users suffer outages as its satellites zoom around the globe.

Richie noted outages can take two forms: obstructions outages – in his case, potentially from a treeline, as Starlink satellites approach the horizon, or “no satellite signal outages.”

But he said he was “pleasantly surprised” on this front. While his Starlink app recorded multiple outages, they collectively amounted to just a few seconds per day, and he expected this would get better as the service launched more satellites.

He forwarded the Herald stats from a sample day when he had no downtime from obstruction outages and a collective six seconds of lost connectivity because of no satellite signal outages – plus two minutes lost to what the app called a “network issue.”

Musk definitely has plans for expansion.

On September 8, SpaceX Chief Financial Officer Bret Johnsen told a satellite tradeshow audience, “We’re producing 5000 Starlink dishes a week, and will have multiples of that in coming months”. A new, lower-cost unit will be available soon, he said.

And while Starlink, which has some 1600 satellites in orbit today, Musk is shooting for a total network of 42,000 (subject to push-back from astronomers, who are already howling about the ‘birds’ obstructing their work).

More broadband from space is coming, too.

Amazon is planning Project Kuiper, which will involve a constellation of 3236 satellites.

Like Elon Musk, the company’s founder, Jeff Bezos, is a space buff. And, again like Musk, he wants to make a global broadband service part of his plan for world domination.

“My initial experience suggests that Starlink should be okay for the average rural punter, especially once more satellites are up,” Richie said.

“But ‘power users’ need to do their homework, as some features commonly available from traditional ISPs are crippled by Starlink.

The Coromandel man has yet to decide whether to return to relying on his much slower but fuller-featured copper account.