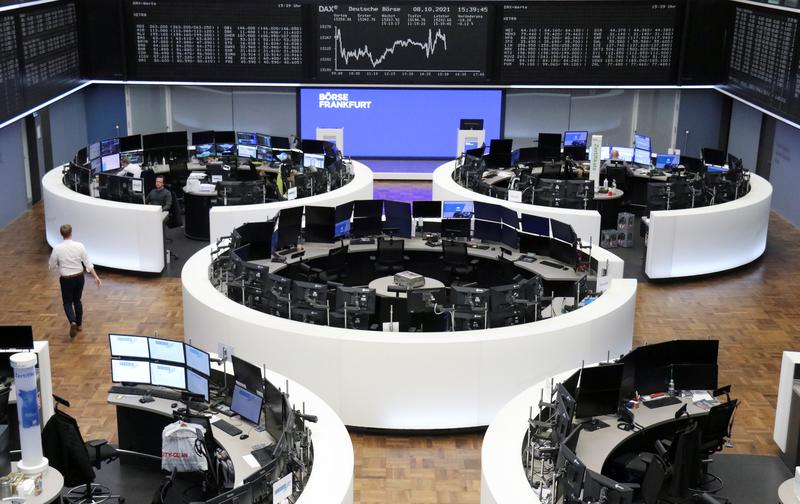 (Reuters) -European shares fell on Monday after weaker-than-expected growth data from China hit luxury stocks, while a relentless surge in commodity prices fuelled worries about inflation spiralling out of control.

The pan-European STOXX 600 index fell 0.5% after an upbeat start to the quarterly earnings season drove its strongest weekly performance since March on Friday. The index fell after three straight session of gains over which it jumped about 2.7%.

Equities fell globally after data showed China’s economy hit its slowest pace of growth in a year in the third quarter, hurt by power shortages, supply chain bottlenecks and major wobbles in the property market.[MKTS/GLOB]

China-exposed luxury stocks including LVMH, Kering and Hermes fell between 1.4% and 2.4%, also hurt by Chinese President Xi Jinping’s call for the expansion of a consumption tax.

But analysts are expecting European companies to report a near 47% jump in third-quarter profit, as per Refinitiv IBES data. Those figures have been revised higher in recent days, helping the STOXX 600 inch toward its August peak.

“When we look at the outlook in the next 12 months, valuations may come down a little bit, but not enough to offset the move higher that we see in earnings, and that should be pretty positive,” said Michael Bell, global market strategist at JP Morgan Asset Management.

Belgium’s Umicore was among major laggards, falling -3.9% after it cut its profit outlook to reflect a stronger than previously expected impact from the global semiconductor shortage.

French biotech company Valneva shot up 32.8% on positive results from a late-stage trial for its inactivated, adjuvanted COVID-19 vaccine candidate.

As crude futures rose past $85 a barrel, European oil and gas stocks capped losses. But Europe’s gas squeeze looked set to continue as Russia’s Gazprom showed no sign of hiking exports to the region in October. [O/R]

London’s FTSE 100 retreated from near eight-month highs after investors bet that the Bank of England plans back-to-back interest rate rises for its November and December meetings, with more to come next year.

“The signposts all seem to be pointing to a November rate rise … which has helped drag down UK markets,” said Danni Hewson, AJ Bell financial analyst. “What’s certain is that raising rates can’t do anything about supply issue.”

The Hut Group rose 20.5% after the British online retailer backed by SoftBank said it would remove its founder’s “golden share” and seek a premium listing after its shares plummeted last week.