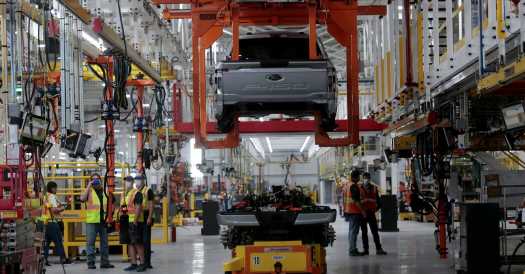 Ford Motor significantly increased its commitment to electric cars and trucks on Monday by announcing that it would spend billions of dollars to build three battery factories and an electric truck plant in the United States, creating 11,000 jobs over the next four years.

The company described the investment, which it said would enable it to produce more than one million electric vehicles a year in the second half of this decade, as the single largest in its 118-year history. All told, Ford and a South Korean supplier will spend $11.4 billion on the project.

The announcement is the latest multibillion-dollar move by an automaker to quickly move to electric vehicles and phase out gasoline-powered cars and trucks as part of the global effort to combat climate change. Transportation, chiefly cars and trucks, is responsible for about 30 percent of U.S. greenhouse gas emissions, more than the power sector.

President Biden is pressing Congress and other countries to enact policies that would quickly move the world away from fossil fuels, and Ford’s announcement could influence negotiations in Washington over Mr. Biden’s climate and energy agenda. It could also become a talking point at a United Nations climate change conference that Mr. Biden and other world leaders will attend in Glasgow in November.

“I think the industry is on a fast road to electrification,” Ford’s executive chairman, William C. Ford Jr., said in an interview. “And those who aren’t are going to be left behind.”

Environmentalists have long criticized automakers for not responding forcefully enough to climate change and for selling large, gasoline-guzzling trucks and sport utility vehicles. But the industry has made a hard pivot to electric vehicles in recent months because of growing environmental concern — and because of the competitive threat posed by Tesla, the dominant maker of electric cars.

Established automakers like Ford and General Motors are racing to catch up to Tesla, which is on track to sell more than 800,000 electric cars this year. Tesla has become the most valuable automaker in the world by far, with a market capitalization of nearly $800 billion. Ford’s market value is $56 billion.

The Transition to Electric Cars