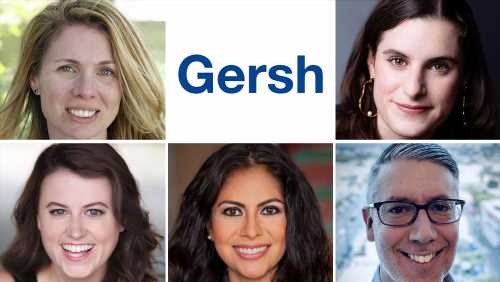 EXCLUSIVE: The Gersh Agency has promoted three women and hired a fourth, all within its Television Literary Department, while tapping Alternative TV vet Collin Reno for its the agency’s division in the nonfiction TV space.

The move aims to continue Gersh’s mission to provide opportunities for traditionally underrepresented demographics while bettering the department as a whole by bringing in different perspectives and experiences which will then translate to developing unique stories with a voice for the television medium. The female agents are building a diverse roster of clients, with particular interests in writers and directors who are female, BIPOC, and/or part of the LGBTQIA+ community.

Katy McCaffrey has been promoted to co-head of the department alongside Ian Greenstein, who has overseen the department since 2018. She joined Gersh in 2014 as an agent in the TV Literary Department. Among McCaffrey’s clients are Anya Adams, two-time winner of the NAACP Image Award for outstanding director in episodic comedy and Emmy-winner Ashley Bradley, who’s Marvel animated Dsiney+ series What If… debuted August 11th.

Auri Maruri has been hired as Agent in the TV Lit department, focusing on TV and feature crossovers. She comes to Gersh from Trevor Noah’s company, Day Zero, and prior to that was at Lionsgate’s Latino label, Pantelion Films. There, she oversaw the production of three films, including the hugely successful comedy and family film How To Be A Latin Lover, now a straight-to-series order for Apple TV +. Maruri grew up in Texas and Mexico, went to school in Boston, and speaks fluent Spanish and conversational French. She most recently signed notable Colombian director Patricia Cardoso, who directed Real Women Have Curves and is shooting the pilot for MGM/ Amazon’s SHELTER based on Harlan Coben’s Mickey Bolitar book series.

Eliza Wheeler has been promoted to an agent in the TV Lit Department. She joined Gersh in 2019 where she worked for David Rubin and Jason Klorfein before being promoted to coordinator late last year. As an agent, she will continue to work in the TV Literary department with a focus on underrepresented voices across all identities and an eye toward content that has a distinct point of view. She is based in LA and is a graduate of Georgetown University.

Danielle Szyperek has been promoted to TV/Lit Coordinator at Gersh. Previously, Danielle has worked in production, development, and dramaturgy for The Brooklyn Music School, the Original Idiots, and The Private Theatre. She received her BA in English Literature from St. Lawrence University. She has studied at Interlochen, the Atlantic Theater Company, and HB Studio and is currently a first-year MFA Playwright at Goddard College.

Collin Reno comes to Gersh after 25 years as SVP at WMA/WME. Along his journey as an agent, he took a brief detour into production and development for Dick Clark Productions where he oversaw the development and sales of more than two dozen programs before rejoining the agency. Post the merger between WMA and Endeavor Reno became a Partner and Co-Head of WME’s Alternative TV Department. His experience and deep knowledge of business trends have helped him thrive across the Venn diagram of sub-genres in the field; having represented leading production companies, producers, authors, directors, and talent. A small sample of the shows Reno has been involved in packaging are: The Biggest Loser, Bill Nye The Science Guy, Penn & Teller: Bullshit!, The Weakest Link, American Ninja Warrior, Celebrity Rehab, Jamie Oliver’s Food Revolution, The Agent, Coaching Bad, Spartan Ultimate Team Challenge, Famously Single, CNN’s The 60’s, 70’s, 80’s, 90’s, 2000’s; Couples Therapy, A Little Late with Lilly Singh, Strange Texas for Paramount +, Immoral Compass for Quibi, along with countless comedy and event specials branching over broadcast, cable and the streaming platforms as with Adam Sandler’s 100% Fresh for Netflix. Reno will be based in LA until transitioning to spearhead the expansion of the Alternative Dept in the New York.