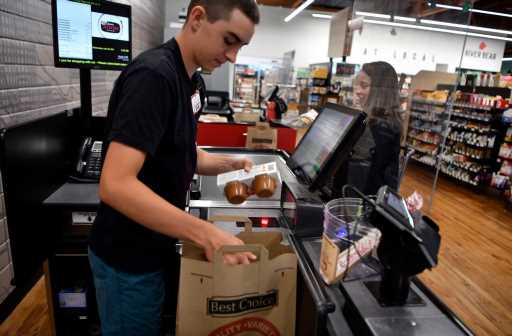 Consider a jar of peanut butter, or maybe a truckload of it if you’re running a large food bank, to illustrate inflation.

On top of paying more for peanut butter, the food bank also paid more for shipping due to the ongoing labor shortage and because of gas prices that cost nearly $1.25 a gallon more than a year ago, she said.

“In today’s market, drivers are able to name their own price,” McGee said.

Community Food Share managed to keep the important staple on its shelves, but the organization bore the cost of a product that rose in price by 6.6% between August 2019 and August 2020, according to the September Consumer Price Index, produced by the U.S. Department of Labor.

“The simplest explanation is everyone has been cooped up for a year and not spending as much as they ordinarily would and now we all decided at the same time we wanted to go spend money on things,” said Tony Cookson, co-director of the Center for Research on Consumer Financial Decision Making at the University of Colorado Boulder. “When we all decide to do that at the same time, the issue is the economy needs to provide us all with those goods. We don’t have unlimited capacity to do that.”

The rising prices have people concerned about their household budgets, and they have economists debating just how much inflation will happen before prices level out. The consumer report released Sept. 14 showed the all-items index increased 5.3% between August 2020 and August 2021.

But economists noted that the rising cost of living slowed ever so slightly from July, meaning things were still more expensive but prices weren’t rising as fast as the previous month.

Last month, Federal Reserve officials predicted inflation would continue through 2021 and then slow down next year as the pandemic eases.

In the Denver area, the cost of all items rose in July by 3.5%, according to the Bureau of Labor Statistics. Energy prices, including gasoline, rose the highest with a 24.3% jump over 12 months. The average price for a gallon of regular gas was $3.55 in Colorado, compared to $2.82 a year ago, AAA reported Wednesday.

Food prices increased 2.6% and the cost of everything else rose 2.4% over the previous year, according to the Bureau of Labor Statistics report, which compared July 2020 to July 2021.

When gas prices go up, it affects everything.

“Even your apple you pick up in your supermarket is going to contain some energy cost because a truck had to carry it to your grocery store,” Cookson said.

At Community Food Share, the impact of inflation is two-pronged.

The food bank works with 40 nonprofit organizations in Boulder and Broomfield counties. It receives most of its food through donations, but the agency also purchases food directly from manufacturers, McGee said. However, the pandemic wrecked the supply chain and grocery stores had less to donate, forcing Community Food Share to double the amount of food it buys directly. This year’s budget will buy more than 1 million pounds of food, she said.

Not only does it cost more to buy food to stock pantries, but more people need help putting groceries in their homes.

“The skyrocketing prices with inflation pushes a lot of people over the edge to need help for the first time,” McGee said.

The United States experienced relatively low inflation over the past five years, but in the last year that trend changed fast enough that people noticed, said Mac Clouse, a finance professor at the University of Denver’s Daniels College of Business.

When the state closed restaurants, malls and movie theaters at the start of the pandemic in March 2020, people stopped spending money. And they were slow to loosen their wallets. Meanwhile, families received economic stimulus payments even if they remained employed. For many, that resulted in fatter bank accounts.

So when vaccines became common and COVID-19 cases appeared to be on the decline, people were ready to spend. But there weren’t enough new cars, bedroom furniture and clothes to go around.

“It takes a while for the supply to catch up for the demand,” Clouse said. “What you get when the demand is greater than supply is you get rising prices.”

The pandemic created a weird economic crisis, he said. On one side, millions of people lost their jobs and relied on unemployment to make ends meet. On the other hand, people kept their jobs but cut spending by skipping vacations, concerts and sporting events while receiving federal stimulus payments. Those people watched their bank accounts grow.

But at some point, that extra cash will run out and the demand for new televisions, furniture and clothes will ease. At that point, prices should hold steady, Clouse said.

But economists aren’t sure when that will happen.

“This is going to take a while for everything to shake out. The economy can’t come back instantaneously to the way it was in 2019 and the first part of 2020. It’s going to take a while and, unfortunately, is the other uncertainty of what will happen with COVID. It makes forecasting and planning more difficult,” Clouse said.

McGee said she recently met a retired, homebound woman who receives food through one of their senior programs. She told McGee she was saving her monthly food stamp benefits to buy a beef roast. The woman received $16 a month through SNAP and told McGee that if she saved two months’ worth, then she could spend $32 on a roast.

She planned to divide it into pieces and freeze it to make it last.

“That’s the reality for so many people,” McGee said.