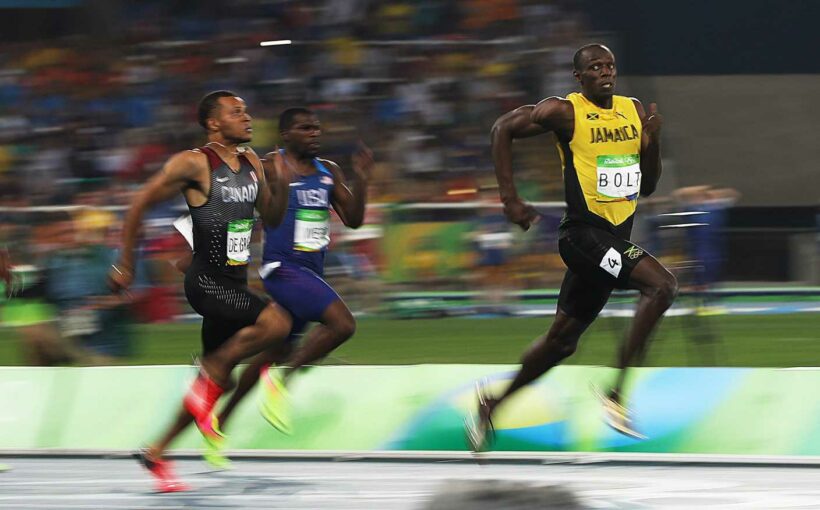 Though he retired in 2017 (and had lost a race or two), the eight-time Olympic gold medalist currently holds the official world record for both the men's 100-meter and 200-meter sprints, which he achieved at the 2009 World Championships in Berlin. He ran the 100-meter in 9.58 seconds and the 200-meter in 19.19 seconds. And he was part of the 4×100-meter world-record-holding relay team at the London 2012 summer Olympics.

But sprinting isn't just a physical sport, says Bolt, 34. It's a mental game, too.

"It's 50/50," Bolt tells CNBC Make It. "You can be really fit but if you're not mentally prepared for the challenge ahead, at times, you will fail."

For Bolt, it's about not getting "into his head." When he does, that's when he makes mistakes, he says.

"Because at times you get into your head and you start thinking about your weaknesses," Bolt says.

Bolt's weakness is his start and making his first step quickly, he says.

So "I tend to randomly think about anything else but the race" at the track, he says. "I might think about playing video games or what I might have [to eat] after the race." Sometimes he thinks about how he will celebrate if he wins, he says.

"These are the things [I use] to distract myself before a race," he says, "because when they say, 'on your marks,' you have no time think about anything else."

Once Bolt is running, he says he experiences "flow," an optimal state of consciousness that athletes often describe as a sense of oneness with whatever task they are doing when they are not worried about failure or other distractions.

"Sometimes, it's like time is moving slow" when he's running and in "flow," Bolt says.

He also focuses on making sure he executes the plan that he and his coach Glen Mills discussed earlier that day.

But as much as Bolt is mentally and physically prepared as a world-class sprinter, he also attributes his success to his love of running.

"I enjoyed the process. I had fun while doing it. Yes, it was work but for me, it really wasn't 'work,'" Bolt says.

After four years of not racing, Bolt announced Tuesday that he plans to run an 800-meter race live at his home track in Kingston, Jamaica on July 13 to promote the used car website CarMax, as a spokesperson.

Though he hasn't been racing, Bolt does hit the track.

"I have a bet with my friends because they feel in a couple of years, I'm going to be fat," Bolt says. So he runs at least two times a week and does aerobic workouts in between to stay in shape, he says.

He also avoids late-night snacking. "I try to eat no later than 8 p.m.," he says.

On Father's Day, Bolt announced the birth of his twin sons with his partner Kasi Bennett in an Instagram post. In 2020, the pair welcomed their first child, Olympia Lightning.

Alex Rodriguez on his life and career: 'It's an imperfect story'

CC Sabathia on battling addiction and finding success: ‘I was just born to throw a baseball’