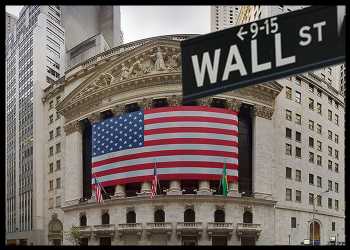 The major U.S. averages are turning in a mixed performance Wednesday afternoon, with the Dow surging higher, while the Nasdaq and S&P 500 struggling to move above the flat line.

Several components of the Dow are gaining some ground today, rebounding from recent losses, while profit taking in some technology stocks is weighing on the Nasdaq Composite Index.

Investors, reacting to data on private sector employment, pending home sales and the reading on Chicago Business Barometer, are looking ahead to crucial non-farm payrolls data for direction.

The surge in infections due to the delta variant of the coronavirus, and curbs on travel in several countries have raised some uncertainty about the pace of global economic rebound, contributing to the cautious mood in the market.

Goldman Sachs is surging up 1.9 percent. Citigroup and Morgan Stanley are up with moderate gains.

Walmart is gaining nearly 3 percent, General Electric is up 2.5 percent and Boeing is moving up nearly 2 percent. Walt Disney, Merck and 3M are also up with solid gains.

Technology stocks Alphabet, Apple, Microsoft, Amazon and Facebook are down in negative territory

Data from Automatic Data Processing, Inc. (ADP) showed private business in the U.S. hired 692,000 workers in the month of June, higher than an expected addition of 600,000. However, the hiring in June was much below a downwardly revised 886,000 job additions in May.

According to a report released by the Institute for Supply Management (ISM), the MNI Chicago Business Barometer came in with a reading of 66.1 for June, down from a score of 75.2 in the previous month.

Data released by the National Association of Realtors (NAR) showed pending home sales in the U.S. increased by 13.1% year-on-year in May, after soaring by a record 51.7% in April.