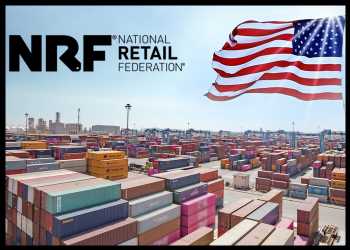 As retailers prepare to meet increased consumer demand for the 2021 Holiday Season, the year is expected to end with imports at major retail container ports in the U.S. showing the largest volume and fastest growth on record for the year 2021, despite COVID-19 induced supply chain disruptions, according to the monthly Global Port Tracker report by the National Retail Federation or NRF and maritime consultancy Hackett Associates.

Though import volumes are not directly related to sales, NRF currently projects 2021 to be a record as it expects holiday sales during November and December to grow 11.5 percent over last year.

“We’ve seen more disruption than ever before because of issues along every step of the supply chain and continued strong consumer demand, but we’re also seeing more cargo and faster growth than ever before,” said Jonathan Gold, NRF Vice President for Supply Chain and Customs Policy.

Gold added that there are still ships to be unloaded and containers to be delivered, but everyone in the supply chain has worked overtime this year to try to overcome these challenges.

The U.S. ports surveyed in the report handled 2.21 million Twenty-Foot Equivalent Units or TEU in October, the latest month for which figures are available, the report said.

For the full-year 2021, imports are expected to grow 18.3 percent to total 26 million TEU from 2020, which will be the highest number since NRF began tracking imports in 2002. The projected total would also top the previous record of 22 million TEU reported last year, which was up 1.9 percent year-over-year despite the pandemic.

The growth rate in 2021 would also be the highest on record, topping 16.7 percent growth reported in 2010, when the economy was recovering from the Great Recession.

Despite the double-digit import growth projects for 2021, monthly totals have settled to single-digit year-over-year growth, a pattern expected to continue at least through the first quarter of 2022.