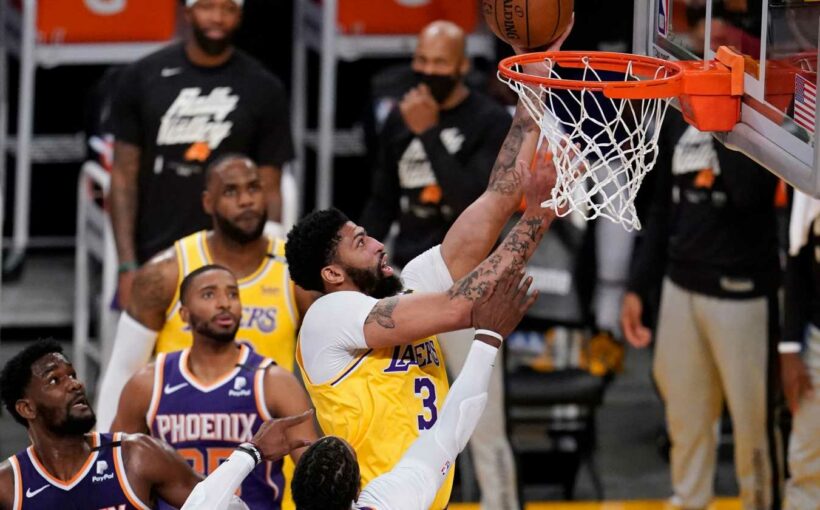 LOS ANGELES — The Los Angeles Lakers finished with a 109-95 win over the Phoenix Suns on Thursday at Staples Center for a 2-1 lead in their first-round playoff series.

Below are key takeaways from the game.

Davis showed immediate discomfort in his left leg after a chase-down block on Devin Booker with 2:36 left in the second quarter. He did not leave the game, but Davis constantly pulled on his knee and limped. Then when the first half ended, Davis walked slowly and was the last person off the court.

It appeared he might either have to sit or remain extremely limited. Neither scenario happened.

Instead, Davis still suited up for the second half and then dominated in the third quarter. Davis scored 18 of his team-high 34 points in the period. Despite his dominance, Davis was not always comfortable.

After LeBron James set Davis up for a dunk, he winced afterwards. During a subsequent timeout, Davis paced around the Lakers bench before bending his knees. Davis still stayed on the court, but had some more awkward moments.

Davis could not connect on another James lob and fell while pursuing the pass. That prompted Davis' teammates to leap off the bench and pick him up as if they were saving fine china from breaking. James found Davis for another dunk attempt, and his shot bricked off the rim and sailed high in the air.

Nonetheless, Davis converted on a hook shot, powered past Suns center Deandre Ayton for a reverse layup and had a consistent post presence.

So it might worry the Lakers how Davis' health is holding up. But it's an encouraging sign that Davis successfully played through whatever pain he had.