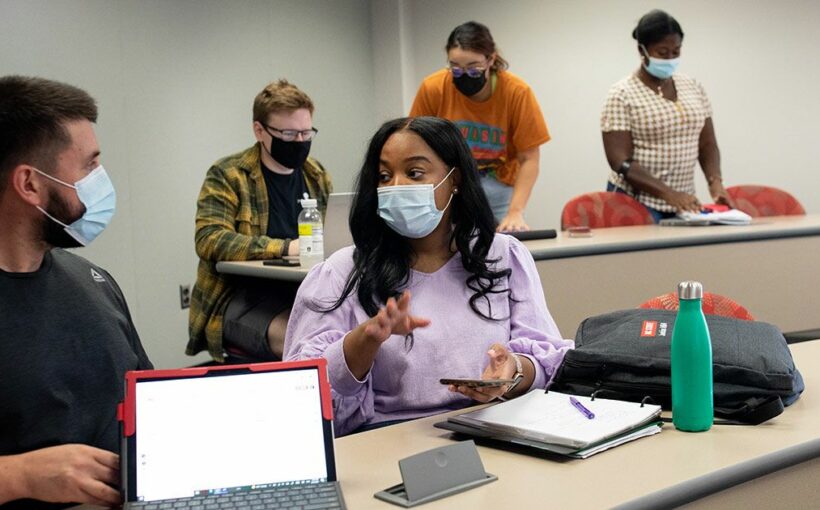 Jaeden Powell says she was hesitant to share her opinion with co-workers at her first job at a New York investment bank. As a young Black woman, she wasn’t sure where she fit in. “There weren’t a lot of people who looked like me in the room,” Powell says.

Now the 24-year-old is the first to occupy a spot aimed at students from underrepresented groups atNorth Carolina State University’s Jenkins MBA program. The new effort from NC State may eventually contribute 10 of the 50 MBA students accepted each year, says Jen Arthur, director of admission.

NC State was the top school in Bloomberg Businessweek’s inauguralB-School Diversity Index, which ranks business schools based on their success in attractingfemale students and those from minority ethnic groups—two demographics that have long beenexcluded from the programs that supply corporations with their future leaders. NC State’s MBA class in the ranking was 65% female—the second biggest share for women of any school—and Black and Hispanic students made up an unusually high one-quarter of the cohort.Howard University, a historically Black school, had the highest share of Black students, followed byAmerican University. For Hispanic students, the top programs were atFlorida International University andUniversity of Miami.

With people of color making up a growing proportion of U.S. society—soon to be a majority—diversity in the business world is a critical issue. Even after the racial awakening prompted by the murder of George Floyd, enrollment in MBA programs trails the diversity of the population, and minority applicants have fewer financial resources to pay for studies than their White peers.

Companies that lack Black directors have been the target of investors and activists, prompting a surge in board appointments over the past 18 months. Data show that Latino board members have experienced fewer gains and are even further behind their share of the population, according to executive recruiter Heidrick & Struggles. Only five S&P 500 companies are run by a Black CEO.

Some schools have been working to boost representation of different ethnic groups for years, and the results show. In 1968, theSimon Business School at the University of Rochester was the fourth school to join the Consortium for Graduate Study and Management, which promotes enrollment and leadership for people of color. Now a majority of the school’s MBA students are people of color. Simon ranked 11th in the diversity index, in which race and ethnicity counted for 50% and gender the other 50% of the total score.

“We fundamentally believe that diversity in business leadership will create a competitive advantage for the companies where our students ultimately work and ultimately lead,” says Rebekah Lewin, senior assistant dean of admissions and programs at Simon. “Not only is there going to be an impact on the diverse students that we enroll, but I think on the nondiverse students as well.”

MBA programs need to recognize that increasing the diversity of their students is the right business decision, says Ayman Omar, associate dean of graduate programs at Kogod School of Business at American University. “There’s also been a climate change among the students,” Omar says, noting that Black and Hispanic students are twice as likely as other students to recommend the school to others, according to student surveys done by the school. Just under a third of students in the Kogod school are Black, best among all MBA programs after Howard. Howard is ranked third in the diversity index, while Kogod is ninth. The proportion of Black faculty at Kogod has more than doubled since 2014, and since 2015 the share of Black MBA students has increased 47%.

Even in areas like Florida, where MBA programs such as the Florida International University College of Business and University of Miami Herbert Business School can take advantage of a large Hispanic population, the focus on diversity has to remain intentional, says William Hardin, the interim dean at the Florida International business school and associate dean for graduate programs. The school, which at 67% has the highest proportion of Hispanic students, was ranked fifth in the diversity index. It has no Black students in the current class; attracting Black students is a continuing focus, Hardin says. Overall, 15% to 16% of students in graduate programs at Florida International are Black.

The system remains precarious. About 3 in 4 underrepresented minority students indicated plans to cover tuition using external funding sources such as grants, fellowships, and scholarships, compared with just over half of non-minority candidates, according to survey data from the Graduate Management Admission Council. That means minority students rely more on funds that are less under their control, compared with majority students who can pay a larger share of their own education. So even if they want to get an MBA, for many minority students the funding is more at risk of falling short.