Home » Business » Millions of gallons of wastewater being pumped into Tampa Bay; officials say ‘no second breach’ at Florida reservoir 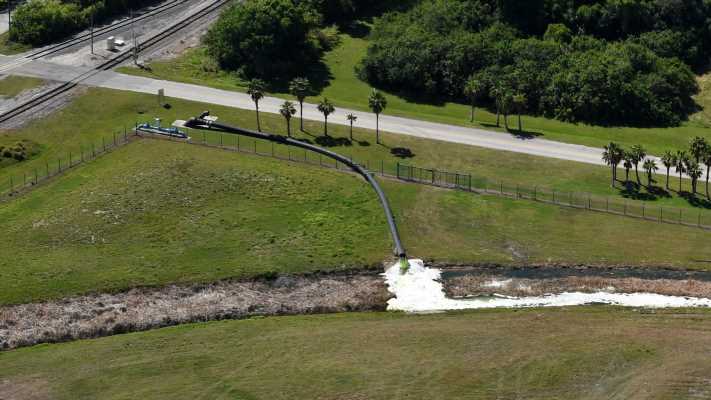 SARASOTA, Fla. – Crews on Tuesday were continuing to pump wastewater from a retention pond into Tampa Bay to prevent a catastrophic breach that could send a massive wall of water into the surrounding area.

Last week, the Florida Department of Environmental Protection approved the pumping of industrial wastewater from a retention pond at Piney Point, a former phosphate plant, in response to the facility’s second leak in a decade. The wastewater is about as acidic as black coffee and contains elevated levels of phosphorus and nitrogen, which can feed the algae that causes red tide.

Meanwhile, more than 300 homes and multiple businesses in the area around Piney Point have been evacuated. A state of emergency has been declared by Florida Gov. Ron DeSantis for Manatee, Hillsborough and Pinellas counties.

Visual explainer: How crews pumped wastewater into Tampa Bay to hold off breach, flood in Florida

Here’s what we know Tuesday:

Is there a second breach in the Piney Point retention pond?

While the leaking wastewater containment pond wall at the old Piney Point fertilizer plant site continues to be a critical situation, the Florida Department of Environmental Protection said Monday concerns about a possible second breach in the wall have proven to be unfounded.

Manatee County officials said that a drone with thermal imaging equipment identified a possible second breach in the wall at 2 a.m. Monday. An investigation later determined the area identified was not another wall failure, according to the department.

“Our technical team and our engineers came in and evaluated and determined there was no second breach,” said department spokeswoman Shannon Herbon.