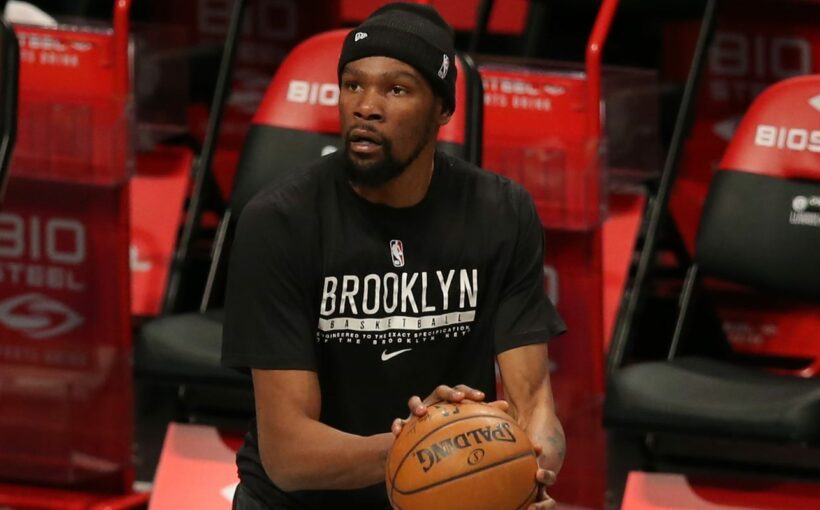 The Brooklyn Nets star has not played an NBA game for nearly seven weeks. That left Kevin Durant fielding plenty of questions about his strained left hamstring, which has kept him sidelined for the past 20 games and counting.

"I feel great," Durant said Thursday before the Nets played the Charlotte Hornets. "I feel like it’ll be soon that I can be out there with my teammates."

Yet, Durant did not just address his injury and subsequent rehab. Durant also apologized for having an argument with comedian Michael Rapaport on Twitter via direct message, a private conversation that Rapaport made public because of Durant’s frequent personal insults, homophobic slurs and profanity.

"I’m sorry that people have seen that language I’ve used," Durant said. "It’s not really what I want people to see and hear from me. But hopefully I can move past it and get back on the floor."

Durant is active on his social media accounts and often responds directly to media members and fans that criticize him.

Kevin Durant on his social media messages with Michael Rapaport that were made public: pic.twitter.com/024CmvrEbi

"It was a private conversation with him and the other party," Nets coach Steve Nash said of Durant’s exchange with Rapaport. "We’ve talked about it internally. But we’ll keep all of that stuff internal."

The Nets sounded more forthcoming, however, about Durant’s injury. That started with whether Durant could return for the Nets’ back-to-back in Chicago on Sunday or against New York on Monday.

"I doubt he would play in either of those games, but he’s progressing," Nash said. "We’re monitoring it and continuing to push and finding him opportunities within that structure to get high-intensity loads in so we can measure for when it’s safe for him to come back and play. Everything is progressing the way we’d like, and fingers crossed it won’t be too long."

When that will be remains unclear.

Durant said he has spent the past month working out in the weight room, improving his conditioning and occasional games of four-on-four. Though Durant has completed in a full-court scrimmage, he argued the next step has more to do with "running up and down the floor as opposed to having five guys out there."

"It’s good to get a few of those sessions in before I want to jump into an NBA game," Durant said. "That’s what we’ve been doing the last few days and what we’ll do going forward."