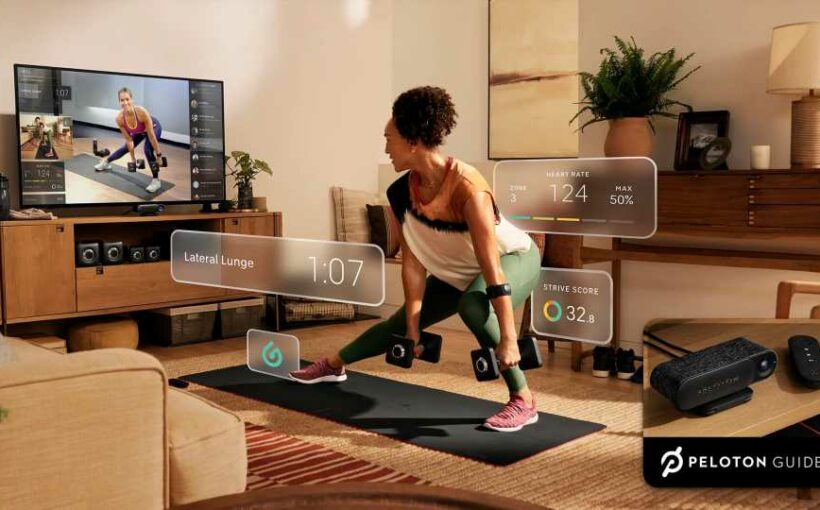 As Peloton grapples with finding new avenues for growth, the company announced Tuesday that it's adding a strength training product, known as the Peloton Guide, to its lineup of connected exercise devices.

Starting early next year, Peloton will sell the Guide in a bundle with its heart rate armband for $495 in the United States and Canada. It will go on the market in the U.K., Australia and Germany later in 2022.

The Guide consists of a camera that plugs into a TV screen and tracks users' movements via machine learning technology. Members who pay an additional $12.99 per month can take live and on-demand classes that target different muscle groups through weight lifting, lunges and other strength-building exercises. The Guide, which is also voice activated, will recommend classes based on what muscles a member previously worked.

The Guide is a no-frills product compared with rivals like Lululemon-owned Mirror and Amazon-backed Tonal, which retail for $1,495 and $2,995, respectively. Tonal is entire wall-mounted device that includes magnetic powered weights for strength exercises. Earlier this month, Mirror said it's adding smart dumbbells and ankle weights that will connect to its machine.

Peloton's device doesn't come with weights or other accessories. Users must buy those separately. The company did say it will be making upgrades to the Guide over time, which could include connecting other pieces of equipment.

The announcement comes a few days after Peloton slashed its fiscal 2022 revenue forecast by up to $1 billion. CNBC also reported Peloton has temporarily halted hiring to cut costs as it sees softening demand for its cycles and treadmills. Investors have been dumping the stock in recent days. Since Thursday's news, Peloton shares have lost more than $10 billion in market value.

Chief Executive John Foley has voiced optimism about the new products in Peloton's pipeline, as well as other opportunities the company is pursuing in commercial, corporate and international markets. Peloton has reportedly been working on a rowing machine that would take on Hydrow, a connected rowing machine that counts Lizzo and Justin Timberlake among its backers.

According to Peloton's Chief Product Officer Tom Cortese, strength classes have been increasingly popular among the company's subscriber base. Within its app, Peloton already offered members a range of core exercises and weight training courses. Those subscribers pay $39 per month to access content.

Without testing the Guide, it's hard to say how accurate the device will be in keeping track of a user's movement and offering suggestions on technique. The machine learning technology could pose another headache for Peloton if it's not an effective workout.

However, it could be an ideal option for someone looking for an at-home connected fitness device without breaking the bank. Compared with Peloton's Bike and Bike+, which sell for $1,895 and $2,495, respectively, the Guide will be the company's least expensive product to hit the market. Its Tread costs a whopping $2,495.

Peloton might also be able to convince its existing, loyal customers to add the Guide to their current at-home gyms.

Peloton shares are down about 66% year to date, with its market value close to $15.4 billion.