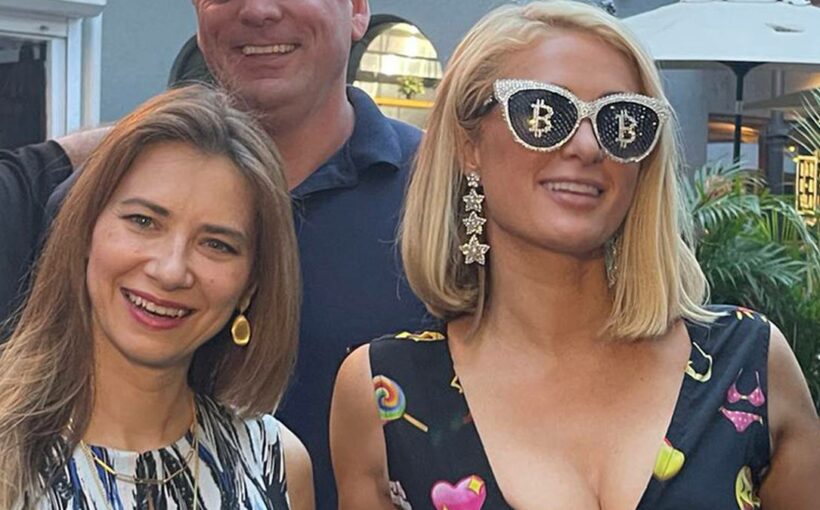 It was just a few years ago that the only people who knew about cryptocurrency were basement-dwelling nerds and people looking to buy weed on the dark web.

The murky digital world spawned from a dream of decentralisation, and the power of people to turn their back on the financial institutions that had ripped them off for too many years.

Flash forward to today, and it’s clear we all live in a very different world.

Over the weekend, celebrities like Paris Hilton rubbed shoulders with billionaire investors who barely look like they’d hit puberty this year, alongside women in furry rave bikinis drinking copious amounts of booze in the sticky humidity of a Florida summer.

It was all part of the largest Bitcoin conference in the world that took place in Miami over the weekend.

Videos from the event show a music festival-like atmosphere as at least 12,000 people gathered in the city to cheer on geeks talking on stage about NFTs and blockchains.

A world leader virtually gatecrashed the event, Tony Hawk reeled back the years by shredding up a half-pipe and crypto billionaires tore up dollar notes in a brash show of their new-found power.

A reporter on the ground there said the sight was something to behold.

“For a few days, the city was a raging fireball of finance, technology and joyful anarchy, of unfathomable wealth and desperate striving,” the New York Times reporter said.

In a microcosm, she said the event — which was cancelled last year because of covid — “heralded the receding of the pandemic”.

The lavish display of power from a new breed of investors, backed by celebrities and increasing mainstream acceptance, could certainly be a sign of what’s to come in the future.

As Wall Street bankers, institutional investors and politicians of both major US parties all travelled to Miami for the event, it’s clear that cryptocurrencies have come a long way since their underground days and they’re not going away anytime soon.

But there was an aura of animosity towards Elon Musk — who is seen by many crypto investors as a market manipulator — looming over the event.

The hostile reception came after the Tesla founder and CEO tweeted a broken heart emoji about bitcoin on Thursday that some investors linked to the cryptocurrency’s Thursday price drop.

A number of conference attendees posted on social media about their disappointment in the Tesla CEO, who recently announced Tesla would stop accepting bitcoin for vehicle purchases due to environmental concerns that were credited with sending the markets lower in May.

The billionaire tech entrepreneur has expressed environmental concerns with the bitcoin mining process, or the process of creating the cryptocurrency. Bitcoin mining is done by solving mathematical puzzles on powerful computers that require large amounts of energy.

But other cryptocurrency experts disagree with Musk’s assessment. Michael Saylor, co-founder of the business intelligence company MicroStrategy and a staunch bitcoin defender, said during the conference that he believes “bitcoin is the most efficient use of energy that the human race has yet come up with”.

The president of El Salvador stunned the world by appearing at a major bitcoin conference and revealed potentially gamechanging plans for cryptocurrencies.

President Bukele said El Salvador may become the first country to make bitcoin legal tender, saying he would soon propose a bill that could transform the remittance-dependent economy.

The move would make the Central American nation the first in the world to formally accept the cryptocurrency as legal money and would “allow the financial inclusion of thousands of people who are outside the legal economy”, Bukele said.

“Next week, I will send to Congress a bill that makes bitcoin legal money,” the populist leader said during a video message to the conference.

The bill aims to create jobs, he said, in a country where “70 per cent of the population does not have a bank account and works in the informal economy”. The El Salvador government is yet to give details of the bill, which will require approval from a parliament dominated by the president’s allies.

Remittances from Salvadorans working overseas represent a major chunk of the economy – equivalent to roughly 22 per cent of GDP.

In 2020, remittances to the country totalled US$5.9 billion ($8.1 billion), according to official reports.

According to Bukele, bitcoin represented “the fastest growing way to transfer” those billions of dollars in remittances and to prevent millions from being lost to intermediaries.

“Thanks to the use of bitcoin, the amount received by more than a million low-income families increases by several billion dollars every year,” said the President.

“This improves life and the future of millions of people.”

The cryptocurrency market grew to more than US$2.5 trillion ($3.4 trillion) in mid-May 2020, according to the Coinmarketcap page, driven by interest from increasingly serious investors from Wall Street to Silicon Valley.

But the volatility of bitcoin – currently priced at US$36,127 ($49,975) – and its murky legal status has raised questions about whether it could ever replace fiat currency in day-to-day transactions.