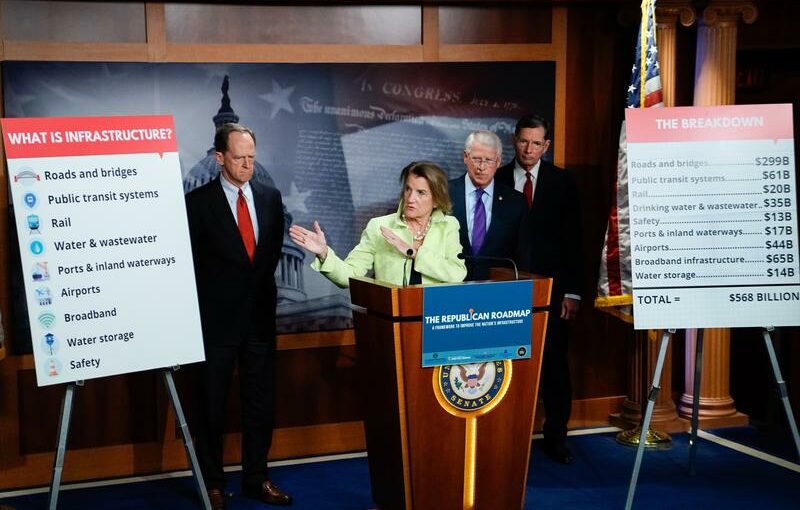 The proposal, which falls below an initial Republican target range of $600 billion to $800 billion, focuses narrowly on traditional infrastructure projects including roads, bridges, rail, ports, water systems and on broadband access. It would not result in higher taxes but be fully paid for through user fees and unspent federal funds.

“This is the largest infrastructure investment that Republicans have come forward with,” said Senator Shelley Moore Capito, who has helped lead the effort as top Republican on the Senate Environment and Public Works Committee.

“We see this as an offer that’s on the table and deserves a response,” she told a press conference, while flanked by leading Republican members of other Senate committees with jurisdiction over infrastructure.

Republicans sent the proposal to the White House on Thursday before it was unveiled. But the package, which represents less than one-quarter of the Biden package, has already been dismissed by Democrats in Congress as inadequate.

Biden, who this week asked Republicans to offer a counter-proposal by mid-May, proposed a sweeping infrastructure plan that not only includes traditional infrastructure projects but also addresses climate change and expands human services such as elder care.

Republicans have opposed the size and scope of the Biden proposal, as well as its plan to pay for spending by raising taxes on U.S. corporations.

Thursday’s proposal could form the basis of a two-track infrastructure process that would include a smaller bipartisan bill and a larger measure that Democrats could move through Congress without Republican votes.