Home » Business » ‘Risks have been minimized’: How March Madness is being pulled off amid COVID-19 pandemic 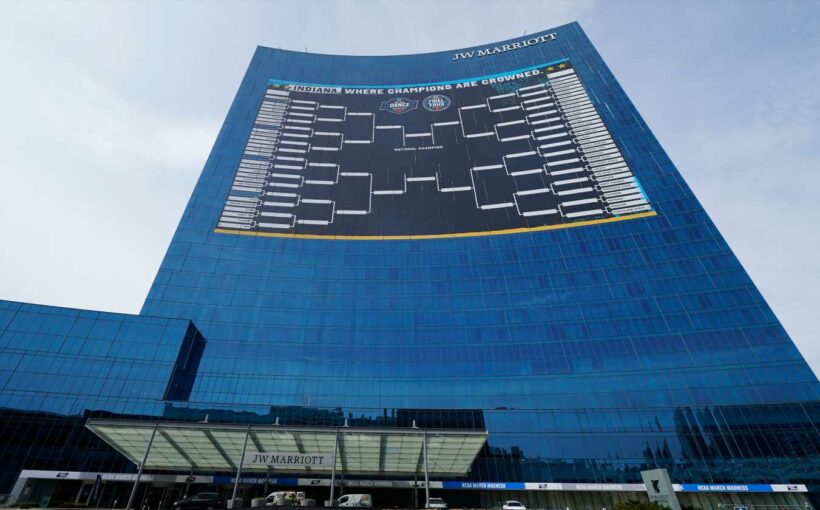 INDIANAPOLIS — The giant bracket printed onto the exterior of the JW Marriott is the largest in history, according to its manufacturer, giving locals and tourists the chance to see their tournament picks go awry across 47,000 square feet.

One year into the coronavirus pandemic, the record-setting bracket and NCAA Tournament signage across downtown Indianapolis are the clearest signs that some normalcy has returned to this city, which is historically reliant on convention and event business as an economic driver.

Beginning March 1, per changes in local ordinances, bars could open at 50% and restaurants at 75% capacity, though eateries are still facing seating limitations based on social-distancing protocols. The six arenas hosting tournament games are allowed up to 25% capacity, though the final decision on attendance has been left up to the venue.

"I think we feel comfortable and confident where we are with planning for fans," said Dan Gavitt, the NCAA's senior vice president of basketball. "Many of these venues have hosted some levels of fans recently, Bankers Life and Lucas Oil Stadium in particular, Hinkle Fieldhouse, as well. We’re confident they’ve had some experience welcoming guests and have those plans in place to keep everybody healthy and safe."

The easing of protocols come as the state has experienced a decline in COVID-19 cases and deaths, mirroring the national trend: Indiana saw 966 new cases Wednesday with a positive test rate of 2.3%, according to the state's Department of Health, and more than 890,000 residents are now fully vaccinated.

"I think they’ve really done their homework on this,” said Thomas Duszynski, the Director of Epidemiology Education at Indiana University’s Richard M. Fairbanks School of Public Health. “The risks have been minimized as much as they can, not only through the efforts of the city, county and state but also because the disease prevalence is going down across the state of Indiana, just like across the country.”

The coronavirus still looms heavily over the NCAA Tournament, which opened Thursday. For the NCAA, the Indianapolis area and the fans in attendance, the event unfolding over the next three weekends presents a dilemma: Do the benefits — the television revenue, influx of new business and the chance to experience the tournament in person — outweigh the risks still posed by the pandemic?

"I don’t want to ruin a good time, but we do have to be responsible and as safe as we can," said Jeff Huron, the general manager at The District Tap, a restaurant near Bankers Life Fieldhouse. "I think the eyes of the world are upon us, in terms of downtown Indianapolis. I want to be a good example."