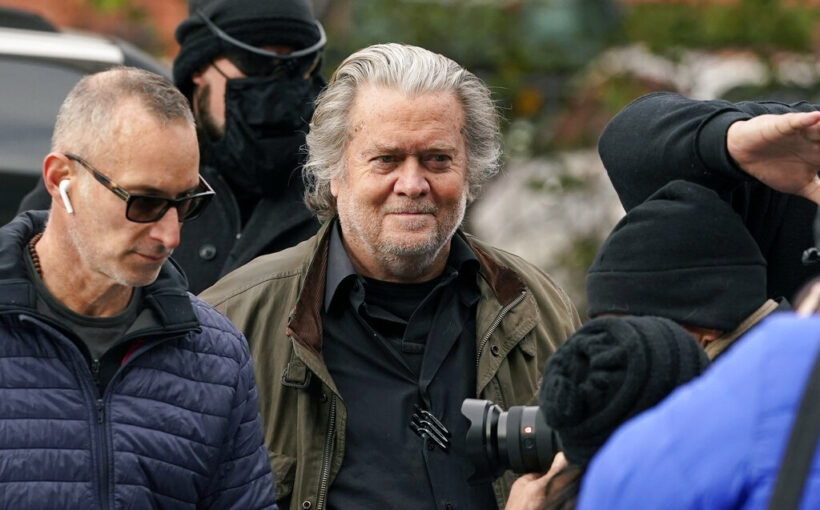 Steve Bannon, the longtime ally of President Donald Trump, was mobbed by members of the media on Monday as he surrendered to federal authorities to face charges of contempt of Congress.

Bannon’s appearance at an FBI field office was expected, and he briefly stopped to make a statement before entering the building. He is scheduled to appear before a magistrate judge later on Monday.

As he was entering the building, Bannon spoke to his podcast listeners in a live stream on the social media site GTTR.

“I don’t want anyone to take the eye off the ball of what we do every day,” Bannon told the live stream. “We got the Hispanics coming to our side, The African Americans coming to our side. We’re taking down the Biden regime.” He then promoted the guest lineup for his podcast, War Room.

The Justice Department on Friday announced a grand jury indictment against Bannon for failing to comply with a subpoena handed down from a House committee investigating the January 6th siege on the Capitol. Bannon, a former film producer, said on his podcast on Jan. 5 that the next day would be “game day. So strap in. Let’s get ready.”

“All hell is going to break loose tomorrow,” he said.

The House committee wants to know the extent of Bannon’s role in the events of January 6. But he has refused to appear at a deposition or to produce documents, as his attorney has argued that they are awaiting the resolution of whether Trump can exert executive privilege over his own role. Bannon was a private citizen on Jan. 6, having left his role as Trump’s chief strategist in the White House in August, 2017.