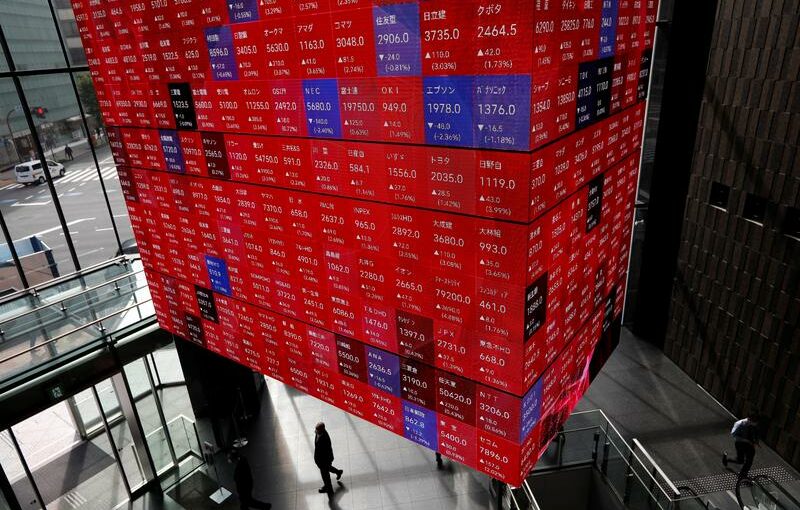 SYDNEY (Reuters) – Asian stockmarkets were becalmed on Wednesday as surges in oil and Chinese factory prices added to worries that a hot U.S. inflation reading could renew pressure on policymakers to lift interest rates.

FILE PHOTO: An electronic stock quotation board is displayed inside a conference hall in Tokyo, Japan November 1, 2021. REUTERS/Issei Kato

MSCI’s broadest index of Asia-Pacific shares outside Japan and Japan’s Nikkei each dropped 0.2% in and Overnight on Wall Street a long rally paused, with the Nasdaq logging its first fall in a dozen sessions. [.N]

U.S. data due at 1330 GMT is expected to show consumer prices galloping higher at 5.8% year-on-year and even dovish Federal Reserve officials Neel Kashkari and Mary Daly have conceded it is running hotter for longer than they expected.

“Coming from them, I would imagine that now there is officially little doubt left within the (Fed) that risks around inflation are much more elevated than previously assumed,” NatWest Markets strategists said in a note.

Longer-dated bonds had rallied on Tuesday, flattening the Treasury yield curve, as investors seem to be wagering on hikes in the next year or so squashing growth and inflation in the years beyond. [US/]

“A firm (CPI) read can add a bit more fuel to the flattening,” the NatWest analysts said. “But I would argue that at this stage, a weak CPI number wouldn’t be enough to ease markets into thinking the Fed will hold back.”

Treasuries dipped a bit in Asia hours, lifting the benchmark 10-year yield about 2 basis points to 1.4626% after it had touched a six-week low of 1.4150% overnight.

Currency markets have been fairly quiet but traders favoured safe havens on Tuesday and lifted the yen to a one-month high.

The Japanese currency held there on Wednesday at 112.84 per dollar and risk-sensitive currencies such as the Australian dollar were under pressure, with the Aussie testing support at its 50-day moving average of $0.7374. [FRX/]

“The dollar will be sensitive to moves in the 2-5 year part of the U.S. Treasury curve,” said Chris Weston, head of research at broker Pepperstone in Melbourne.

China’s economic slowdown is also nagging on investors’ minds, especially as a credit crunch seems to be quickly spreading through the giant property industry.

Bonds in the sector had suffered a fresh pounding on Tuesday, with the sell-off dragging in even investment-grade debts.

“(The) market is now driven more by fear rather than rationale,” said analysts at J.P. Morgan. “Valuations have factored in (the) worst case scenario.”

Other clouds are also brewing, with a survey in Japan showing manufacturers’ business confidence has fallen to a fresh seven-month low and Tesla stock, a bit of a gauge of retail investors’ sentiment, turning wobbly.

The carmaker, which has been the poster-stock of equities’ thumping rally from pandemic lows, suffered its sharpest share price fall in 14 months on Tuesday as traders brace for a possible sale from company chief Elon Musk.