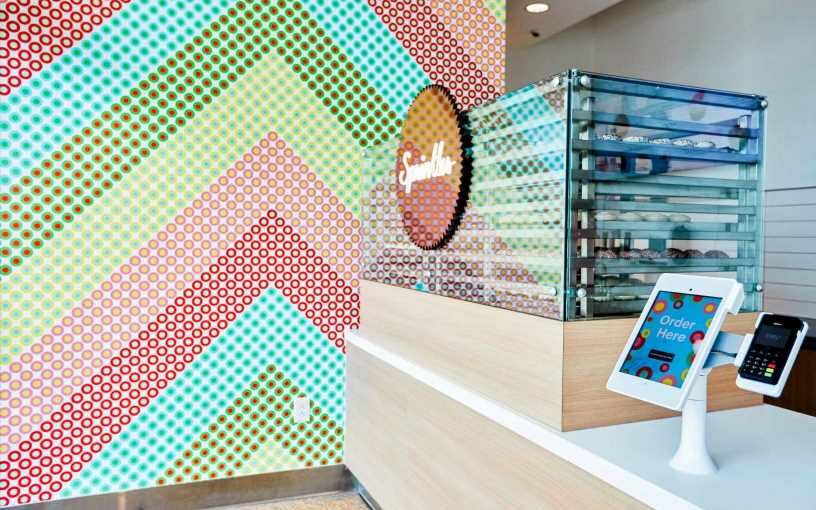 When customers buy a cupcake at a Sprinkles bakery, they no longer line up at a cashier. Instead, they type into a tablet, swipe a credit card and wait for an employee to retrieve an order.

The kiosk system — which the cupcake chain began testing during at the beginning of the pandemic — initially allowed social distancing. Now, it helps the Austin, Texas-based company keep pace with increased online orders in a tight labor market where new employees are hard to find and retain. Its 20 locations will have the kiosks by early January, said Justin Murakami, Sprinkles senior vice president of operations.

To cope in these changing times, retailers and restaurants are stepping up investments in robots and other technology. Walgreens is turning to automation to fill prescriptions, while Sprinkles and Starbucks move to swap out cashiers for tablets. Elsewhere, Walmart-owned Sam's Club is using robots to scrub store floors and scan inventory at some locations, and restaurant chains like Buffalo Wild Wings and White Castle are testing robots that can flip burgers or make chicken wings.

Molly Harnischfeger, a director of the consumer-insights team at AlixPartners, said companies are feeling more urgency as they struggle to find workers and pay higher wages. Plus, she said, shoppers and diners, impatient with long waiting periods and other consequences of staffing shortages, are becoming more open to robots and other technology.

"When customers have been going to restaurants, [and] are … [not] able to get the level of service that they expect and the convenience that they expect, the narrative changes a little bit in their acceptance of this."

They are looking to "get their products quicker, whether that's a robot delivering their curbside order at a retailer, whether it's self-checkout, whether it's their plates coming from the kitchen on a robotic server," she said. "Everybody's feeling that crunch as a consumer right now."

She said many restaurants quietly increased tech budgets and kicked off pilots of robotics and artificial intelligence in the second half of the year — a trend she expects to continue in 2022.

"You're really on the cusp of this technological enlightenment for the restaurant sector," she said.

The retail and restaurant sectors have long been associated with high turnover and low wages. But with fewer workers now and on the horizon, the industries are raising wages, sweetening perks and even offering sign-on bonuses to recruit new hires.

Ron Hetrick, a senior economist for labor market-insights firm Emsi Burning Glass, said the labor shortage will outlast the pandemic. Many baby boomers retired early, and some people opted out of industries with higher levels of interpersonal interactions or chose a job that allowed remote work because of child-care challenges.

Digital orders have also resulted in the need to complete new tasks like moving items off shelves for curbside pickup, or preparing takeout orders and more — which means they need more employees, not fewer.

Inside of Sam's Club stores, robots clean the floors. These robotic scrubbers are powered by software made by Brain Corp., which counts airports, hospitals and malls among its clients. At some locations, Sam's Club is testing an attachment with a camera that scans inventory and can flag if employees need to restock or rearrange a shelf.

Throughout the pandemic, the membership-based club has encouraged customers to use a Scan & Go app to skip lines and check out purchases on their smartphones as they shop the aisles.

The Walmart-owned chain has nearly 600 stores and about 100,000 employees. Through a spokeswoman, the retailer said it has not had trouble finding employees, but it recently raised its hourly minimum wage to $15 — an acknowledgment of a more competitive market.

At Walgreens, some prescription bottles are filled at centralized, automated hubs — rather than getting filled by an employee by hand at a store. The company acquired the majority stake of iA, a pharmaceutical fulfillment technology company, in January.

The drugstore chain has already opened a facility in Phoenix and Dallas, which helps fill prescriptions for 550 pharmacies. It plans to operate 11 of the centers in the U.S. by the end of 2022.

Both Sam's Club and Walgreens say the automation frees up time for employees to help customers instead of spending hours on mundane tasks like mopping floors, manning cashiers or counting pills.

Josh Braylin, vice president of product and marketing for Brain Corp., said companies have to get smarter about how they use their workforce. That means looking for monotonous, low-value tasks to automate — an approach that both saves money and makes jobs more enjoyable.

"A robot can do that repetitive, boring job while that same worker is either going and talking with customers to provide more customer service or potentially spot-clean other areas in the store that may need more attention," he said.

Use of robots powered by Brain Corp.'s software has jumped. The company said the amount of square feet covered by these autonomous robots rose 40% in the retail sector, 69% at airports and 113% at malls year-over-year as of Oct. 1.

With the pandemic, pharmacists and pharmacy technicians have ramped up the patient-care side of their tasks. They are doing Covid-19 tests and vaccines along with filling prescriptions and answering questions about medications. Even beyond the health crisis, Walgreens was looking to turn stores into health-care destinations with doctor offices and other medical services.

"We have way more work to do and opportunities in front of us than we've ever had before due to the pandemic," Shah said.

At cupcake chain Sprinkles, self-checkout kiosks are now part of the pitch to job candidates, who may be nervous about ringing up customers orders in person while slinging cupcakes into boxes for online orders, Murakami said. He described the tablets as a "stress relief" for employees.

"We let them know not only is this for the guests. This is also for the team," he said. "This actually helps create an efficient, organized environment, so you can come in and not have that pressure of making it kind of like an assembly line."